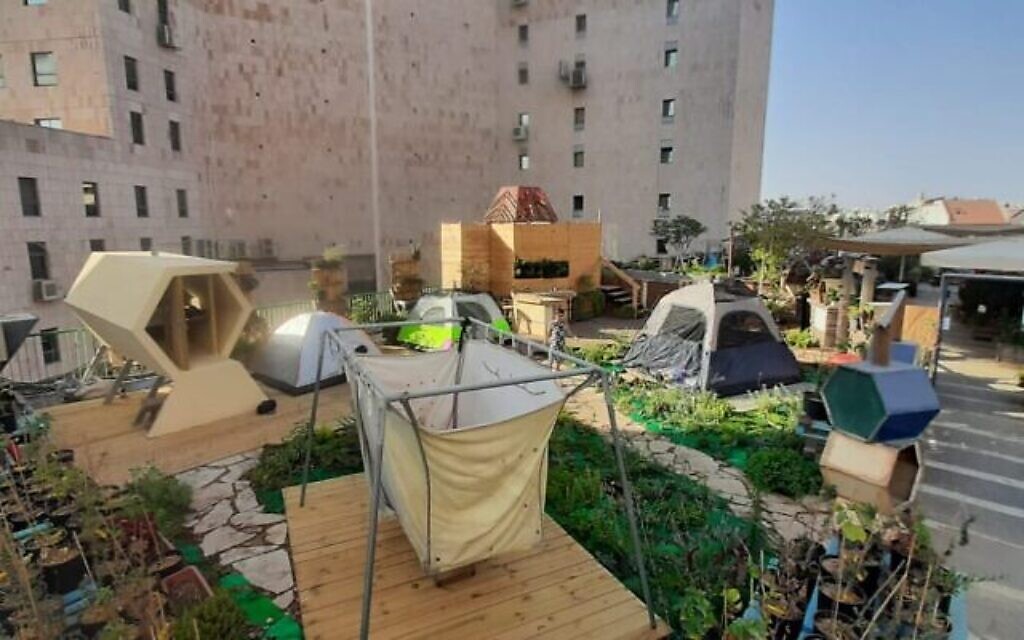 Fancy a vacation on a rooftop in Jerusalem, waking up to a bird’s eye view of the city? The recently opened Gag Eden offers exactly that for the eight people it can accommodate at once. Jerusalem’s first municipal campsite in the city center, Eden gag (a play on “Gan Eden”, or paradise; gag in Hebrew means roof) is located at the top of Clal Center, between Mahane Yehuda Market and Ben Yehuda Street.

This new tourist space and many others in Israel are part of a recent explosion of “glamping,” a portmanteau of the words “glamorous” and “camping,” which, naturally, implies camping in relative luxury.

Glamping accommodation comes in a wide range of styles and includes tents, yurts, mud huts, cabins, pods and luxury caravans, all of which allow a return to nature without sacrificing comfort such as air conditioning – and without guests needing to pitch their own tents.

The Gag Eden campsite occupies two dunams (0.5 acres) on the roof terrace of a center operated by the Muslala community, a non-profit organization established in 2009 by artists, residents and community activists from the Muslala neighborhood in Jerusalem. The group aims to strengthen society and creativity, with projects focusing on innovation and sustainability, including a nursery, beehives, gallery and creative workshops.

Accommodation is in tents that can accommodate up to three people and are equipped with mattresses, bedding, towels and blankets. Or, guests can stay in a mud-built capsule that’s a bit larger. The site also includes a shared kitchen, shower and bathroom. Stays cost between 300 NIS and 400 NIS ($87 to $116) per tent per night. It is designed to create a temporary community rather than just an overnight stop for tourists.

Project director Halel Moran told The Times of Israel that this unique space “allows campers to see the city from a different perspective, to experience nature in the city amidst a desert of empty rooftops.”

Far from trying to corner the market, Moran said he hopes others will come and learn from the rooftop campground, which was created to be as eco-friendly as possible, and that spaces similar greens on rooftops will spread across Jerusalem.

There is also a campsite in Jerusalem forest of peace which has about 150 campsites for more traditional do-it-yourself camping. Tents are available for rent or you can bring your own. Stays cost around 80 NIS ($23) per person per night with tent and mattress rental, or 55 NIS ($16) without.

Itay Kadish Katz, who heads the Glamping Israel company, told The Times of Israel that he has been in the tourism business since 2012 and now sees a growing desire among tour groups to break away from the traditional hotel experience.

Katz’s glamping spots are mostly pop-ups, often in the north, the Arava or Dead Sea region, and set up to stand in for a luxury hotel. They often include not just overnight accommodations, but a full tented kitchen and bar with a chef, hot tub and lounge area for evening entertainment.

These stays can substitute or add to luxury hotel stays, offering a different experience without sacrificing comfort or service.

Reports suggest that increased interest in glamping is a global phenomenon, the market is expected to reach $5.94 billion by 2030. This growth is driven by renewed interest in staycations in the COVID era, as well as by growing environmental concerns, leading more people to turn to ecotourism, which limits the impact of their holidays on the planet.

At present, booking.com offers 17 luxury campsites for rent in Israel, while Airbnb has 17 yurts and over 150 glamping options. They are mainly scattered in the north, the Negev, and especially around Mitzpe Ramon and the Dead Sea.

Acquiring land for a permanent glamping site is one of the biggest challenges for entrepreneurs. While a regular tent for a family can be purchased relatively inexpensively, tents used for glamping tend to be more sophisticated and start at around NIS 6,000 ($1,736), although they can cost significantly more. . Not only do they have larger open spaces for bedrooms, but they also have a more complex structure to add height and improve ventilation. At the higher end of the market they may also require floor construction, outdoor decking and air conditioning installation, and of course there is a need for sanitary facilities. But they remain an affordable way for those with a bit of land to provide tourist accommodation.

Millennials and Generation Z are the groups that most often seek out this form of accommodation. Commenting on her stay at one of the Dead Sea’s glamping resorts, visitor Yessica said “it was a great option to enjoy the Dead Sea in its most natural state, with beautiful views, in a location which had a super relaxing feel,” while another guest comments that you can “chill at the bar with the best views of the mountains… the tents are nice and comfortable with everything you need.

Ori Chalamish at Secret Israel sees a mix of Israelis and foreign tourists looking for new and different experiences. Its customers choose glamping over renting more conventional vacation apartments, and range from extended families to singles and groups of friends. He sees glamping as a major growth area and, having worked with both pop-up campsites and permanent glamping sites, is currently focusing on new development in the south of the country.

Urban rooftop glamping remains a rarity around the world. Gag Eden joins a fairly select club of sites in Melbourne, Manhattan, South Korea and Switzerland. But with some enterprising owners looking to offer long-term tent rentals on their rooftops, it may only be a matter of time before we see more tourist accommodation available at rooftop level. PJC