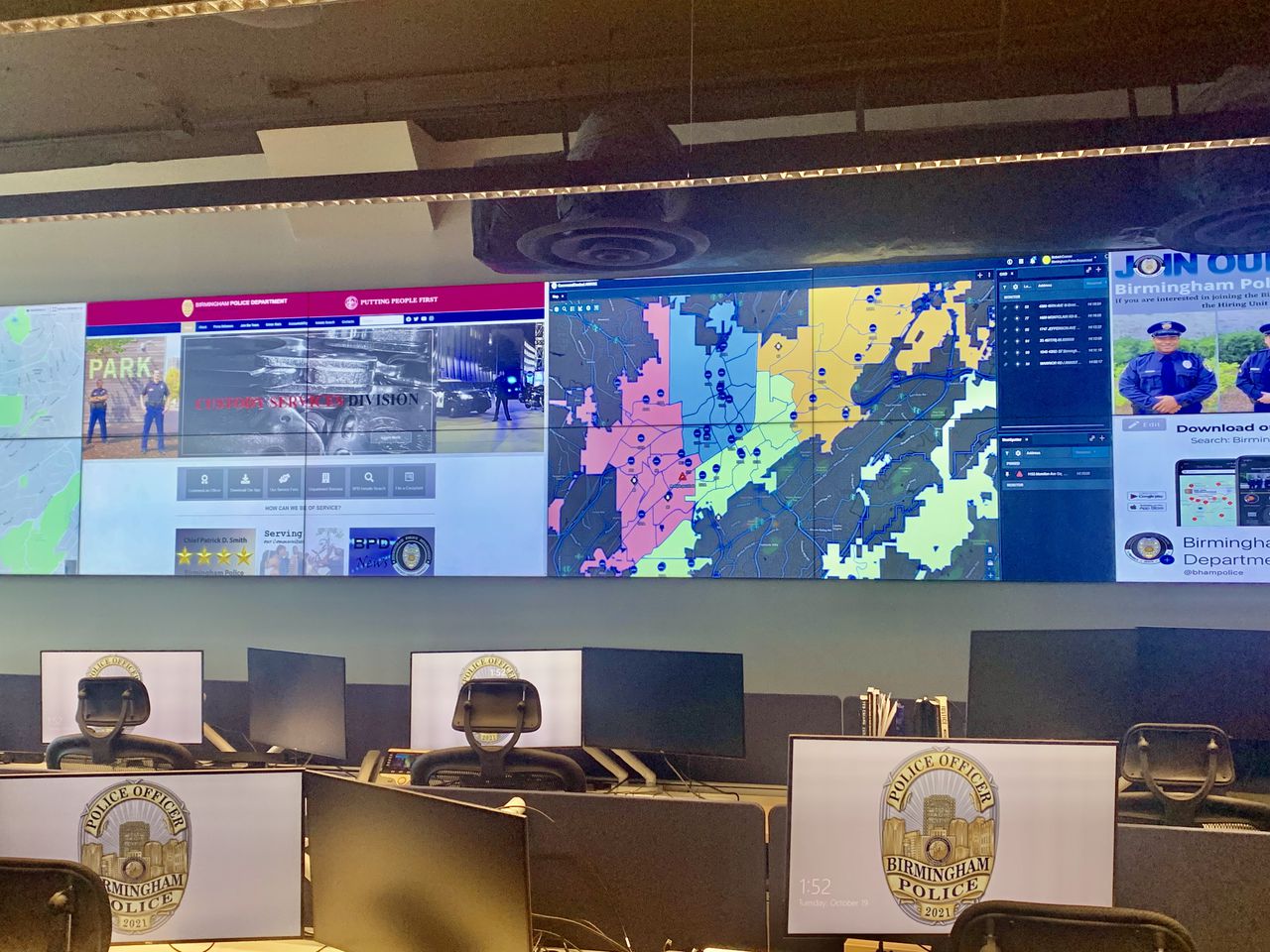 With new $ 3 million Real Time Crime Center, Birmingham police “can show who is behind the gun”

Gunshots rang out in a social housing community in east Birmingham on Tuesday morning, killing a man and leaving a child slightly injured by shrapnel.

Within minutes, investigators had identified a person of possible interest through the department’s Real Time Crime Center, which officially launched on Tuesday.

“During the first day of operation, it is extremely unfortunate that in our city we suffered a homicide today, but in five minutes we were able to solve this problem,” said the police chief of Birmingham, Patrick Smith.

“They were able to extract a video, identify the person involved and give real-time information to our homicide detectives at the scene.”

No charges have yet been announced, but police officials said they were on track to solve the crime.

“This is how real, modern world policing should work,” Smith said.

“I cannot stress enough to the inhabitants of the city the importance of this center,” said the chief.

“Think back to when the Cupcake incident happened. If this center was in place, if we had the cameras in place, the license plate readers, all those things, that might have been a whole different story. The same with the sergeant. Carter. Think about it.

Kamille “Cupcake” McKinney is the 3-year-old kidnapped and murdered in 2019. Sgt. WyTasha Carter was a Birmingham officer killed in 2019.

Police and city officials on Tuesday unveiled the department’s $ 3 million Real Time Crime Center, which features live technology that sees everything tucked away in a hub on the fourth floor of police headquarters.

The state-of-the-art facility was modeled on the best practices of those elsewhere, such as Chicago, Detroit and New York – all centers visited by officials from Birmingham.

The data, which includes photographs of the vehicle and sometimes of its driver and passengers, is then uploaded to a central server.

Readers help with all levels of crime, from stolen vehicles to tracking violent suspects.

Another aspect of the center includes new body-worn camera technology that will allow officers working at the crime center to remotely turn body-worn cameras on and off.

“As things happen – emergency calls – we can turn it on remotely from here so we can see the interaction as it happens,” Smith said previously.

“Through the use of the computer we are able to form a GEO fence around the area and for each officer that drives inside the GEO fence their body camera will automatically turn on, as well as the on-board camera of his vehicle. This way we can get a full overview of what is going on from different points of view. “

Smith said the department will also step up its use of its NIBIN program, a system where officers can compare bullet casings from shots to link the bullets to the weapon used to try to find the shooter.

“Our people who worked with the system were recruited from other cities, so we were not able to fully use the system,” said the chief. “Our goal now is to include the system, now that we can show who is behind the gun. “

The chief hopes that the center as a whole will not only help solve crime, but also reduce crime, knowing that there are many other tools used by the police, such as cameras and license plate readers.

The Real Time Crime Center will operate 19 hours a day – times chosen based on peak crime times. Five to eight officers will staff the center during each shift.

“This is a great day for the Birmingham Police Department and the citizens of this city. We’ve come a long way in what we’re trying to accomplish, ”Smith said.

“In 2019 I presented a very aggressive plan of what we need to do to tackle crime in the city of Birmingham. We wanted to make a difference every day. Not just on the back roads, but overall on the way we watch the city – change everything and watch everything we do. “

The technology, he said, gives them real information in real time and also increases agent safety.

“Our goal is to produce a much, much safer Birmingham,” Smith said. “It’s going to take a little while before we have everything we need here, but I’ll tell you this, there is no going back. It’s a big day for the city of Birmingham.

“You have all heard me say time and time again over the past four years that when we fight crime we want to look at it from a toolbox and we want all the tools available in the toolbox. “said Woodfin. “We believe that having the real-time crime center is an important tool in our toolbox for dealing with and resolving crime.”

“It will help make this community a safer place,” said Woodfin. “For our agents on high-risk calls, this will not only increase their safety, but also the safety of the residents they have sworn to serve. “

Hunter Williams, chairman of the city council’s public safety committee, said city leaders long ago realized they were in deficit when it came to equipment, technology and officer training.

“We have been very intentional in making sure we continue to invest in the resources needed to reduce crime,” he said. “In the long term we know this is an educational and economic opportunity, and I think the mayor illustrated this with the Birmingham promise, but in the short term our citizens expect our forces to order be able to show up in a timely manner, be able to solve a crime, and be able to have the equipment to do so.

“It’s a very small piece of a bigger puzzle,” Williams said. “We will continue to invest in both this department and this community to ensure that we continue to move the needle forward in a positive way and that our citizens get what they expect as taxpayers and residents.”

Smith said he was more than excited about the possibilities at Real Time Crime Center.

“Since I’ve been here we’ve been touched by everything. It is difficult to fight a battle with one hand tied behind your back and your legs tight together. Upon entering, I knew firsthand what tools we were lacking. I knew the technology we were missing. I knew the things that were missing from our toolbox, ”he said.

“It’s exciting for me to finally take that turn to make sure we have everything we need to fight crime in this city.

BOOK REVIEW: “We Were the Fire: Birmingham 1963” by Shelia P. Moses