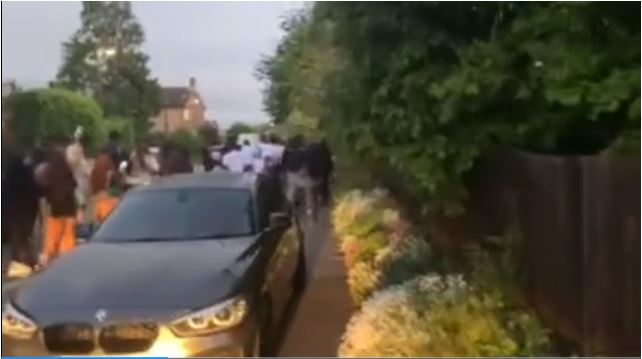 A 20-year-old woman faces a £ 10,000 fine for hosting an Airbnb house party with more than 100 revelers who saw a mass brawl break out.

A neighbor said he saw bloodstains on the road and another found a knife in a garden the next morning as the celebrations descended into chaos and revelers poured into the streets.

The rural rave was advertised online as a vacation rental property in Kent, but instead saw people traveling over 100 miles away for the pre-hosted party.

Neighbors called police at 4:25 a.m. on May 30 after seeing a fight break out in the street.

When officers arrived at the scene in Bearsted, near Maidstone, they discovered that the Airbnb reservation had been made by a woman who lived more than 100 miles away in Milton Keynes.

At over £ 800 a night, the country chalet has a jacuzzi and cinema room and can accommodate up to 10 people.

The weapon found in a nearby garden is believed to have been thrown by revelers. No injuries were reported to Kent Police. Canisters of laughing gas have also been found in the area.

The woman who found the stainless steel kitchen knife said: “It was very scary. The noise was really bad, it spread all over my house. I couldn’t fall asleep until around 5 a.m. knife, they knocked it over.

“It was very loud, like a kick in a nightclub. It looked like they were arguing, a bit of a confrontation.”

The neighbor said she called police about the noise around 2:30 a.m. but was told to call council. When she called the local authorities, no one answered. She said police did not come to the scene until she told them that a fight had broken out.

Another local resident said people were left in cars overnight and during the fighting there was “blood everywhere”.

He added, “It’s just something you don’t expect, especially on a street like this, you see how calm and quiet it is all the time.

“There were bloodstains on the road, spread all over the place. We just saw pushing, pushing, kicking.”

The property’s host, who manages the building on behalf of the owners, said it was booked for five and the Airbnb page says “no parties or events” are allowed.

She said they had to bring in professional cleaners to clean up the mess.

Another neighbor described seeing “at least 100” young people “coming and going all night”.

She said: “It was just muffled music all night long, screaming. It was just awful.”

The Airbnb host, who asked to remain anonymous, said the day after the party that this was the first time the property had been rented.

She said she met the woman who booked the house, who looked “lovely”.

The host added: “We worked really hard on the house, everything was new, this was my first guest, I was very excited.

“It was just an absolute mess, they had taken all the furniture, the dining tables, the sofas, everything. The floors were worse than a nightclub. Your feet just got stuck in everything.”

Read more:Groom, 57, with terminal cancer, collapses and dies as his wife walks up the aisle

On the day of the rave, she walked past the house around 11 p.m. and the property was quiet, she said.

But the next morning, she woke up to messages from neighbors and walked around to find the carnage inside the house.

She added that the property was not a “party house” and that the situation was “very upsetting”.

Thames Valley Police attended the home of the woman who made the booking and she received a fixed penalty notice for staging a rally of more than 30 people “in private accommodation” – a violation of regulations COVID in effect.

Watch: What you need to know about COVID-19 variants