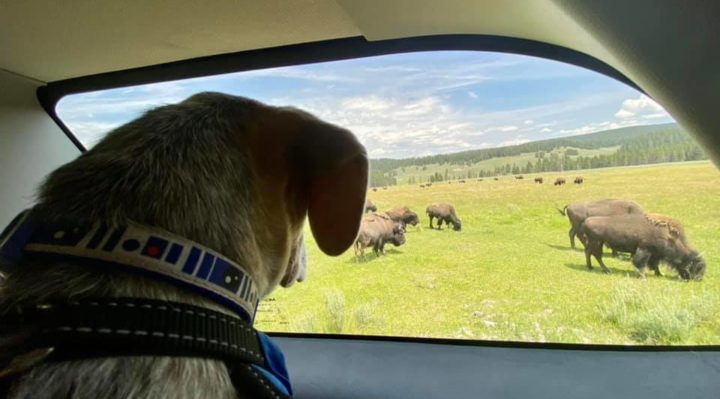 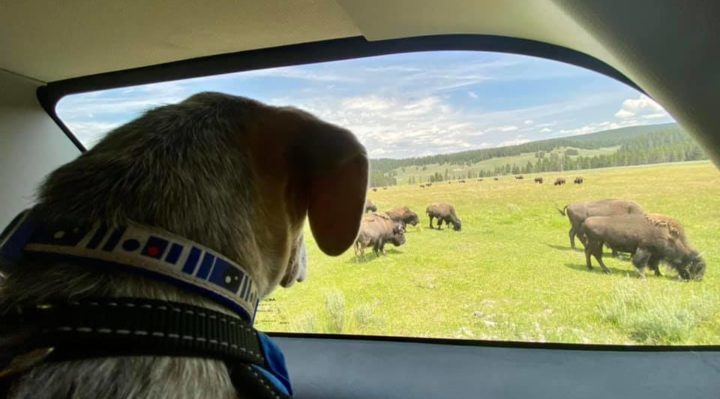 I asked friends on social media to tell us about their best vacations with pets.

Mandy lorian (Wisconsin) I have Biggs traveling west now! We rented an SUV and visited national parks and forests. You need to modify your activities slightly as there are a number of trails that dogs cannot walk on due to being “green bait”, but there is still a lot they can do!

Kim Campbell Thornton (California) Harper and I flew to Oregon in 2019 for a nose test. The day before, we cruised the coast all day in our rental SUV, exploring and listening to country music. That same day, we performed honorably, doing well enough to secure our Elite1 title. We had a good meal in a brasserie in the evening. The next day we went to the carousel museum before heading home later that day. It was three great days. 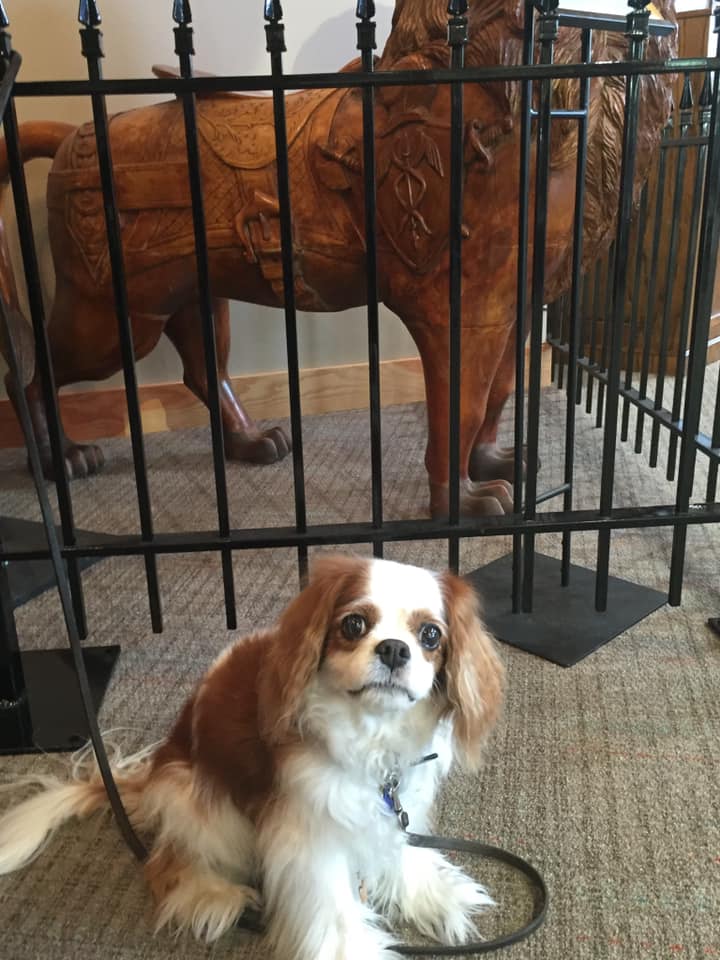 Jennifer grant (New Mexico) I took my older dog with my then boyfriend and his dog to Maine and rented a house. My dog ​​seemed to regain his youth, scaling rocks by the ocean and exploring. He loved her.

Kasia Mikurda (Texas) I took my senior Chi mix to Colorado and had the same experience. She even found her appetite! 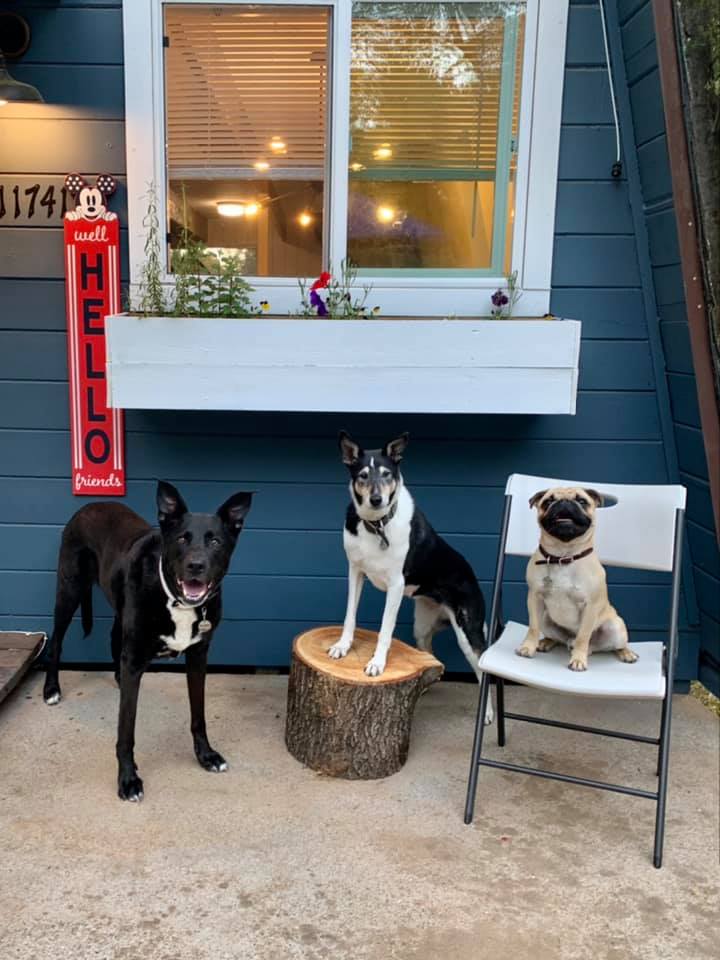 Catherine Horn (California) Three months and 14,000 miles across the country with a home travel trailer. I would leave without hesitation – it would have to be with another dog – if I could. (Shorter journeys are also nice!)

Here he is in Gettysburg at Little Round Top. 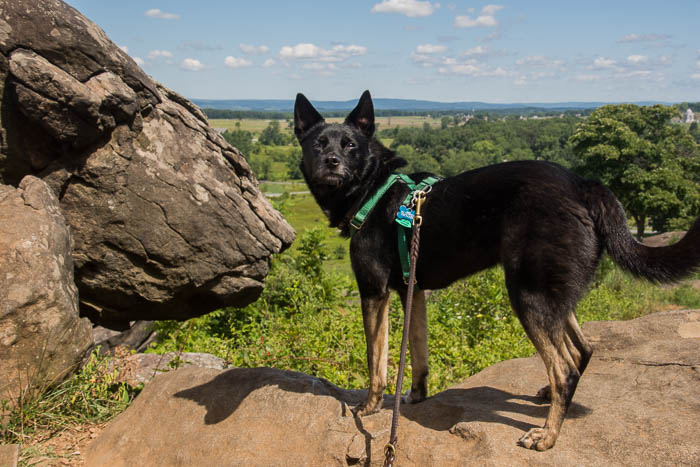 Amy Sugars (Ohio) KD and I recently stayed at the Retriever Retreat in Clarkrange, Tennessee. It was a relatively easy drive from Ohio. We spent a week training with Sherie Korelitz Catledge of Bear Country Retrievers and Gun Dogs, learning advanced recovery techniques. There were six other retrievers and their owners present with us. We all stayed in small cabins on the property and most meals were served on site. The setting was beautiful, the food delicious and the company was fantastic! KD and I learned a lot and had a lot of fun!

A typical day started with breakfast and a round table discussion. Then we headed outside to train retrievers on land and water. The training was tailored to the needs of the participants. After lunch we had more training on different skills. A great conversation was served with dinner! After dinner, it was time to do the homework (skill exercises with your dog) before you went to bed! 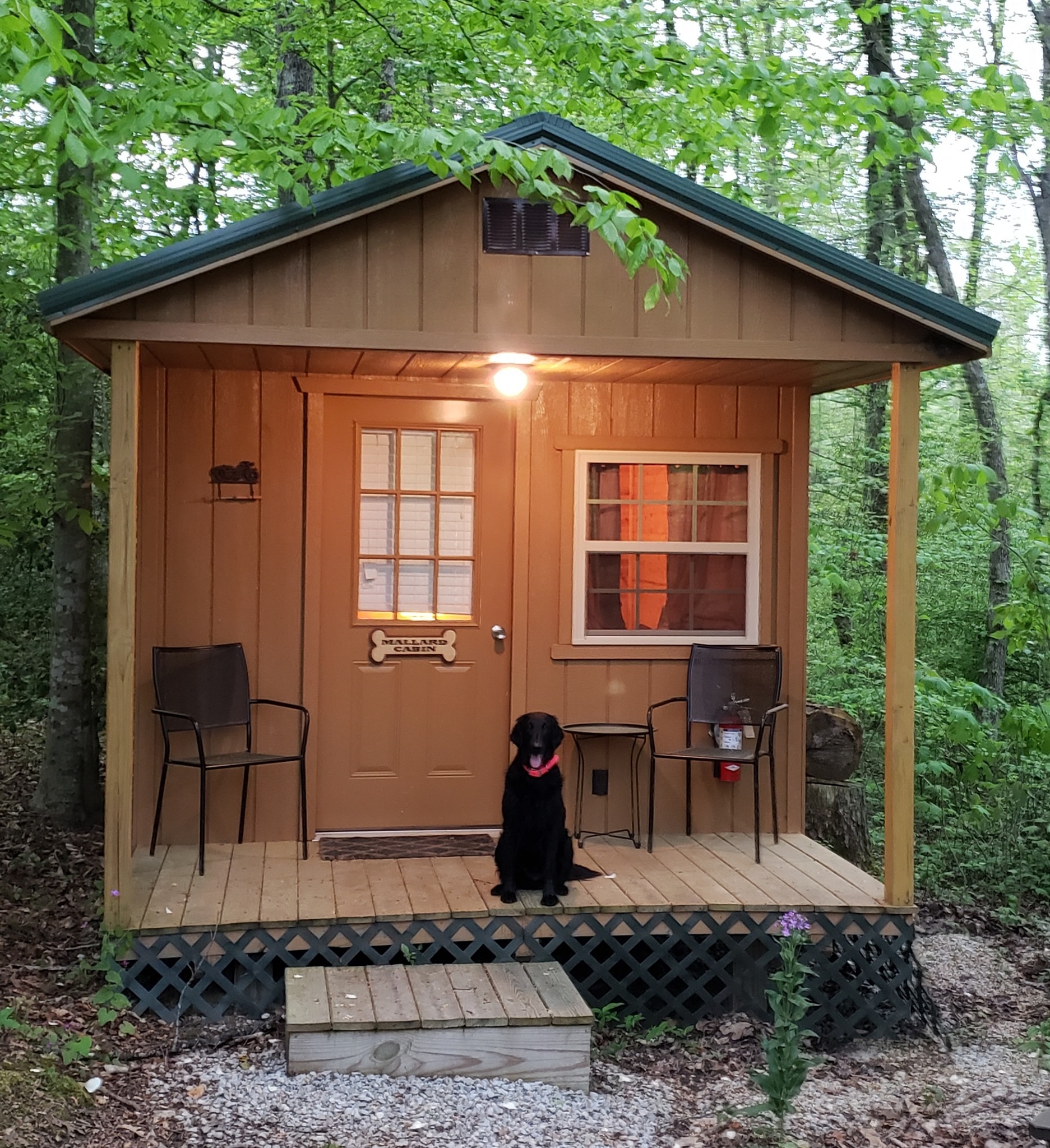 Julie ellingson (California) Visiting my grandparents in Oregon. Mom stacked our Saint Bernard, CeeCee, our Dalmatian, Mackie, Mehitabel the kid, and my sister and I in our 1970 Volkswagen Bug and drove from Sacramento to Bend, Oregon. My sister and I had a blast. (My mom, probably not that much.) By the way, goat hooves are sharp on the knees! And the Saint Bernard are hot in a little Bug in the summer. It was a million years ago, the Bug was new.

Lynn Cashion Kosmakos (California) Dog beaches from Canada to Mexico, camping in a converted Promaster van. Just a Border Collie + old lady. We haven’t touched them all yet, but we will. The dog is equally happy in a bustling California state park with tons of kids or having fun alone with moose or bears hanging out. 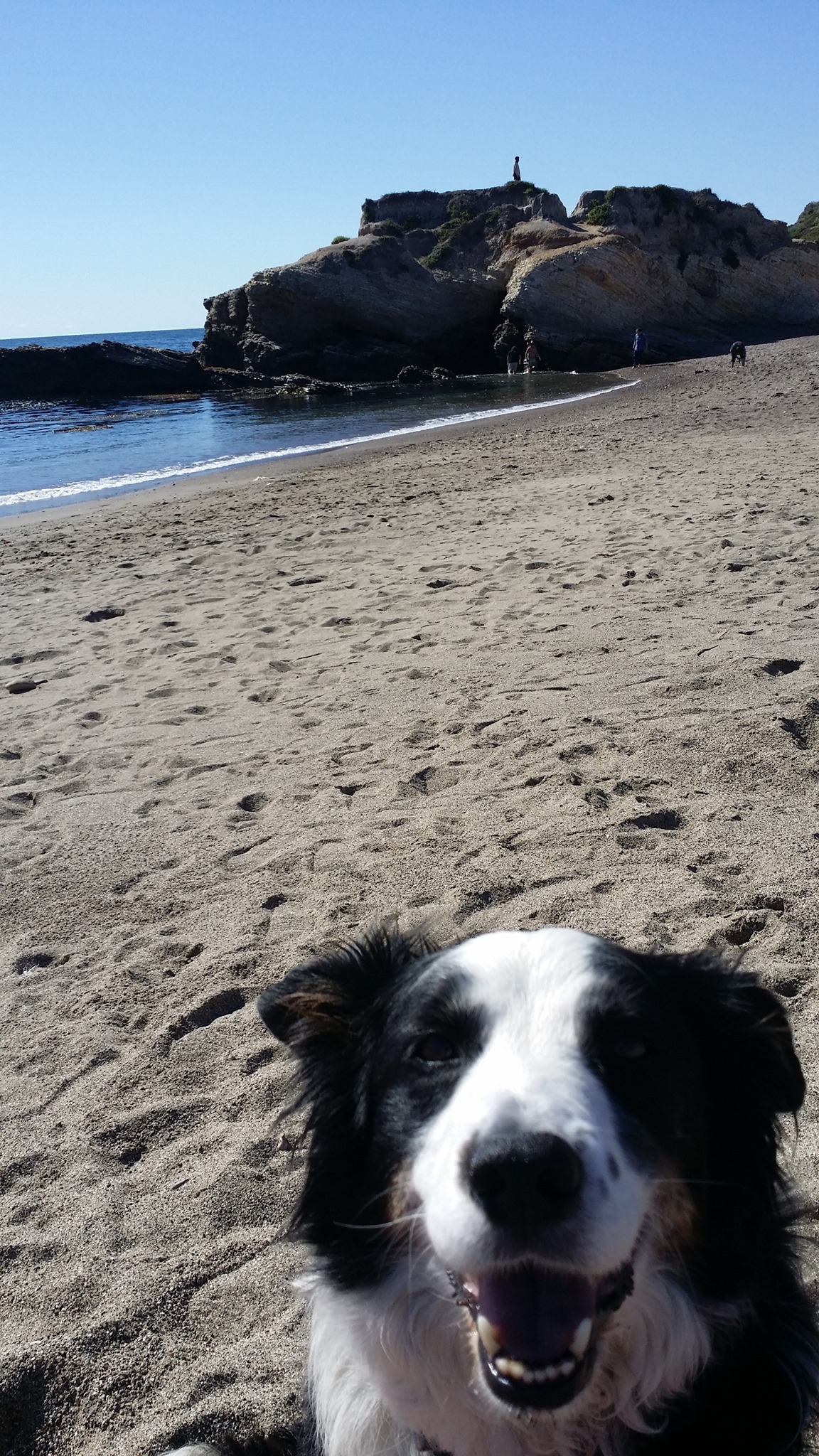 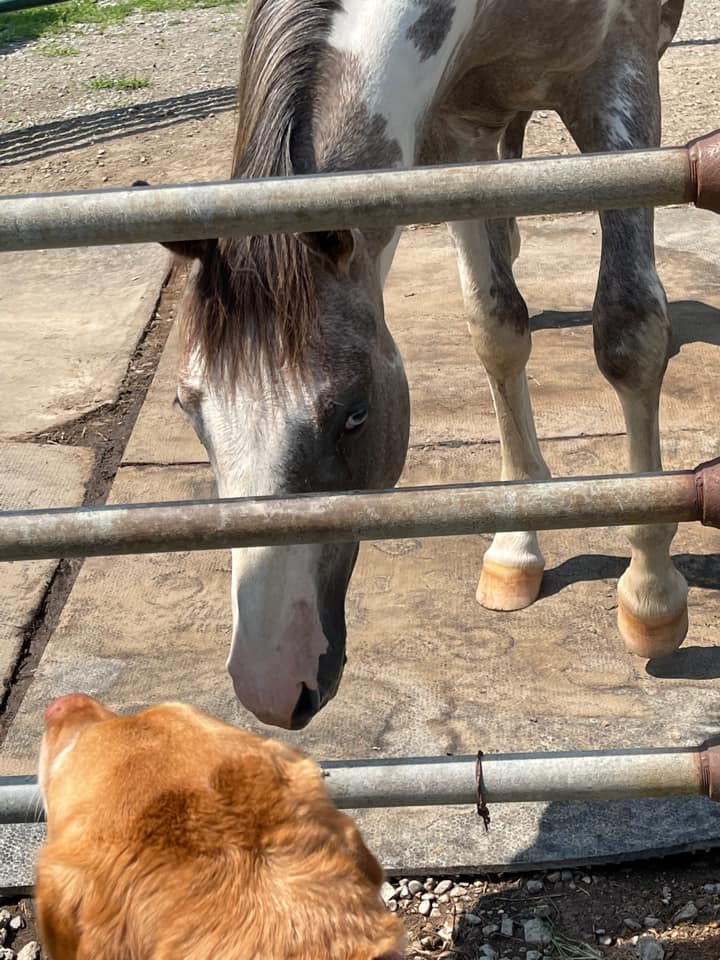 Shelly Keel (California) Three-month RV trip to the United States with my then two-year-old Dakota, along with a nephew and niece. Visit the Grand Canyon, family history sites, national monuments, Niagara Falls and camping. . . lots of camping. 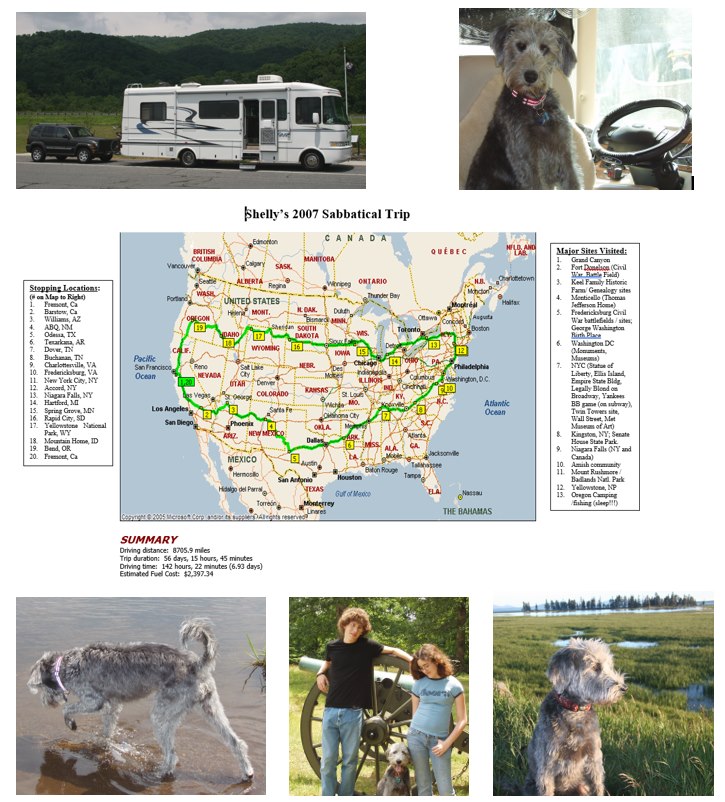 Sandie Hanlon (Massachusetts) We flew from Boston to Phoenix with my border collie who was coming to compete in the USDAA National Agility Championships. Before the competition, we took the time to drive to the South Rim of the Grand Canyon. We stayed for two days and did short dog safe hikes with great views and memories preserved in the photos. From there we drove to Second Mesa in Navajo lands and ended up on the corner of Winslow, Arizona before heading to Sedona for three days. There we walked through canyons and found amazing trails with vortices where many people congregate. Ty had the clay-colored paws of hiking these famous sites, many seen in Western movies. The final stop on the trip was in Scottsdale where we met friends and took some agility classes and finished in the top 10%.

Alisha Ardiana (California) We rented a house in Ukiah. The dog hunted lizards and floated in the pool. We specifically rented the house because we wanted QUIET. It was amazing to see the difference in the dog. She was so happy, she didn’t bark and she happily explored the property independently. The behavior is not in the dog, it reacts to the environment in which we put it! 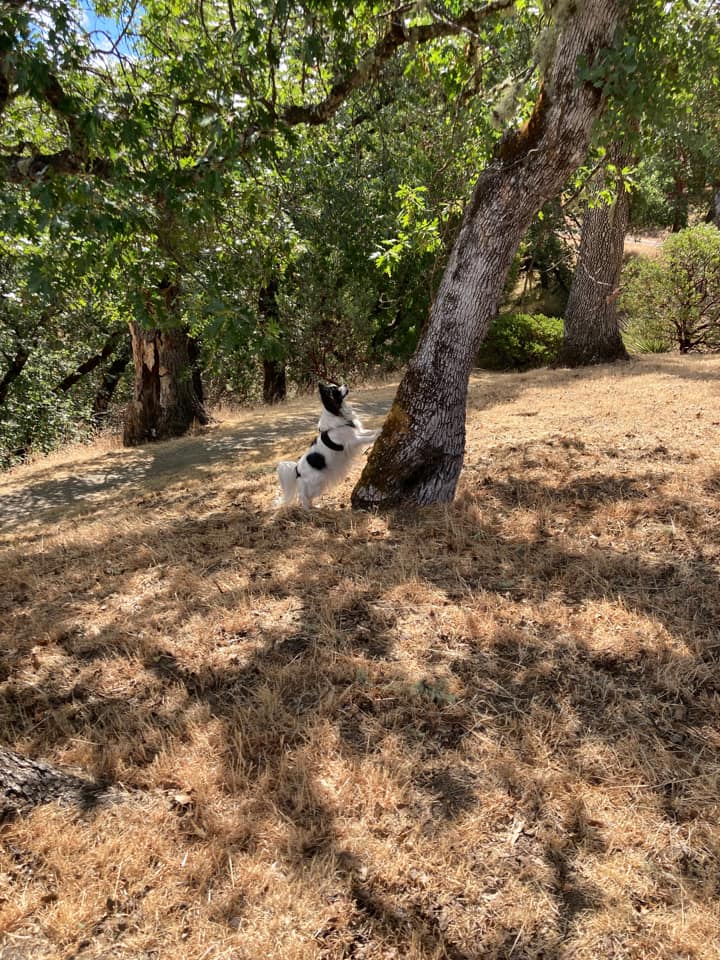 April Stevenson (Washington) Road trips from Spokane to Florida and back five times with my German Shepherd and the Great Pyrenees. The best moments of all time.

Jackie pritchard (Canada) We traveled to Tofino on Vancouver Island from Calgary, AB with our three dogs. Camped at Pacific Rim National Park.

Marcy Rauch (New York) Acadia National Park in Maine. Hiked with a friend and her GSD and my deaf Aussie (who turned out to be partly a mountain goat on the trails). Incredible trails and views, a dog-friendly restaurant in the middle of the park, and a great rental house overlooking the water. It was a fantastic week!

Christine Hale Vertucci (Illinois) I have two. I drove with Omar from Chicago first to New York then to Massachusetts for two nose trials. Just the two of us. It took two days to get there and back, but our trip was 10 days. We rented an Airbnb and hiked and visited wineries every day. We had a great time relaxing together. 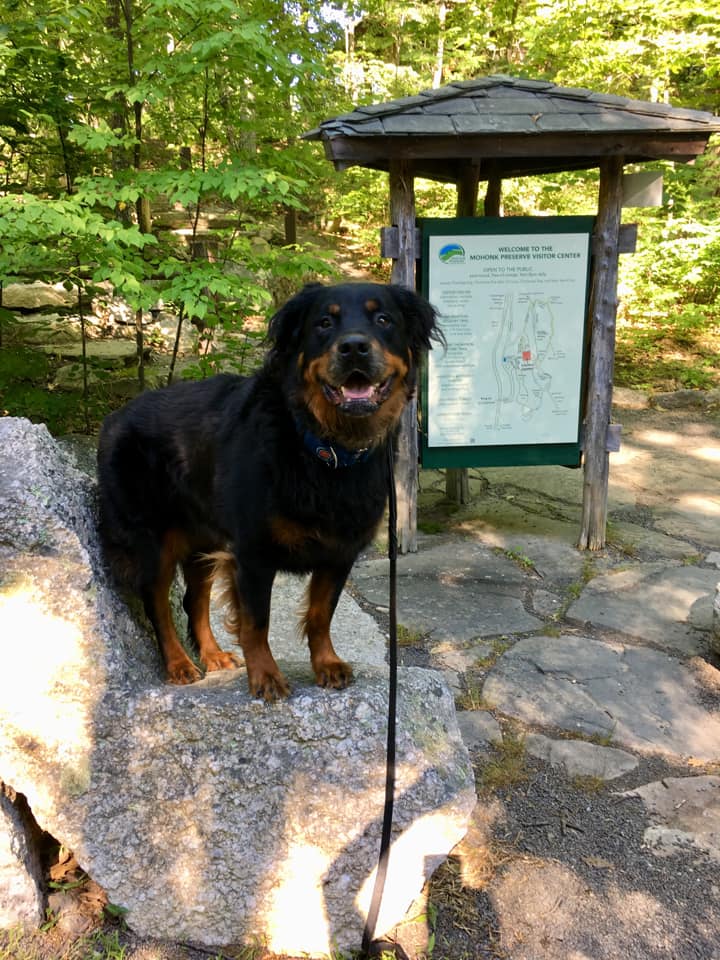 Second, Kima and I drove from Chicago to Los Angeles with a friend and her dog last September. It was during COVID, so many things were closed, but we had a blast. We stopped in Moab (on my to-do list), did a nose job on the Vegas Strip, took photos where we got married – I got married in Sedona, I stood in a corner of Winslow, Arizona, I’ve been to Santa Fe, Taos, and the Grand Canyon, and played on the beach by the Pacific Ocean. Lots and lots of stops in between. 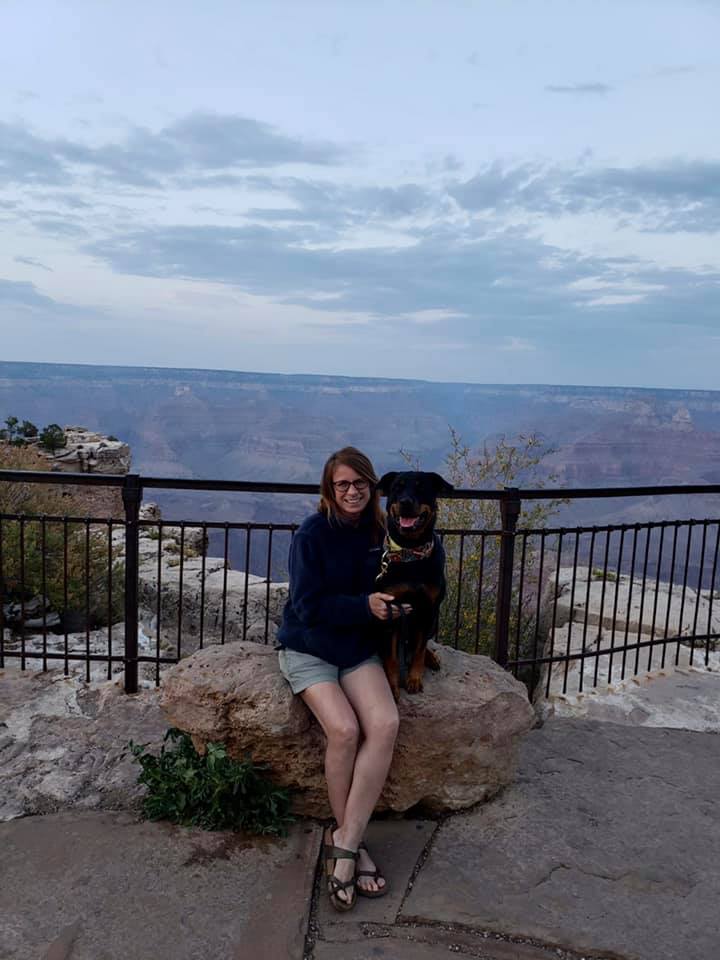 Debby McMullen (Pennsylvania) Lubec, Maine, for 10 days with Kenzo and Trent, after the tourist season, along the rocky coast. It was amazing and peaceful. 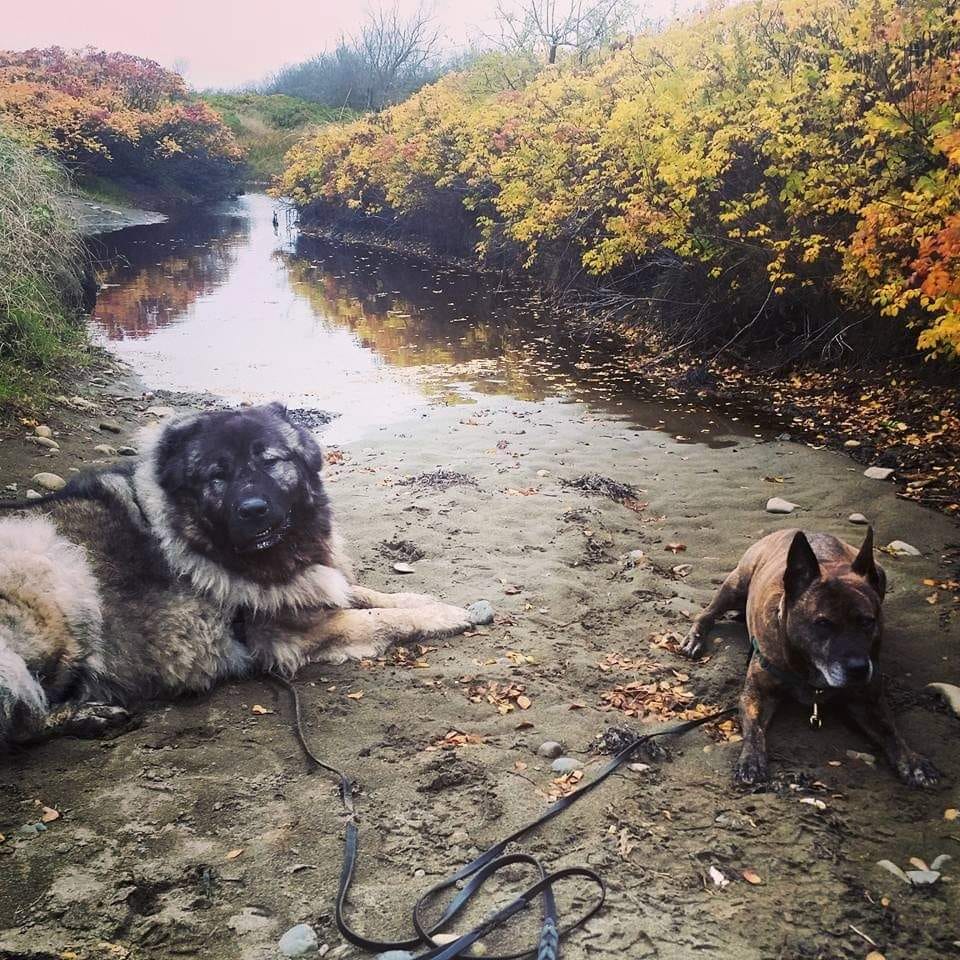 Phyllis DeGioia (Wisconsin) We rented a lakeside cabin in the woods for a week in the spring and brought the two dogs. Despite my collie’s fear and refusal to come out on the terrace overlooking the lake, we had a fantastic and relaxing time. They loved having to be walked several times a day instead of being left in the back yard. Lots of reading, cuddling and naps. Paradise!

Sarah Langevin Gaspar (Florida) Oh! We went to Nashville with Spirit! It was winter and he liked the cold (because we are from Florida). We found a hotel that seemed to like dogs better than humans, and they had nice facilities in the pet rooms. We ended up going to all kinds of parks, chasing a lot of squirrels and he was admired by a lot of people. The best part of the trip was the first time we got to our hotel room. He jumped on the bed and looked at us like, “This is wonderful. Where do you guys sleep? Ooooh. . . and he was also able to get on an elevator for the first time in his life there. It was so much fun being able to share a vacation with my puppy.

How to start a billion dollar business (almost) overnight