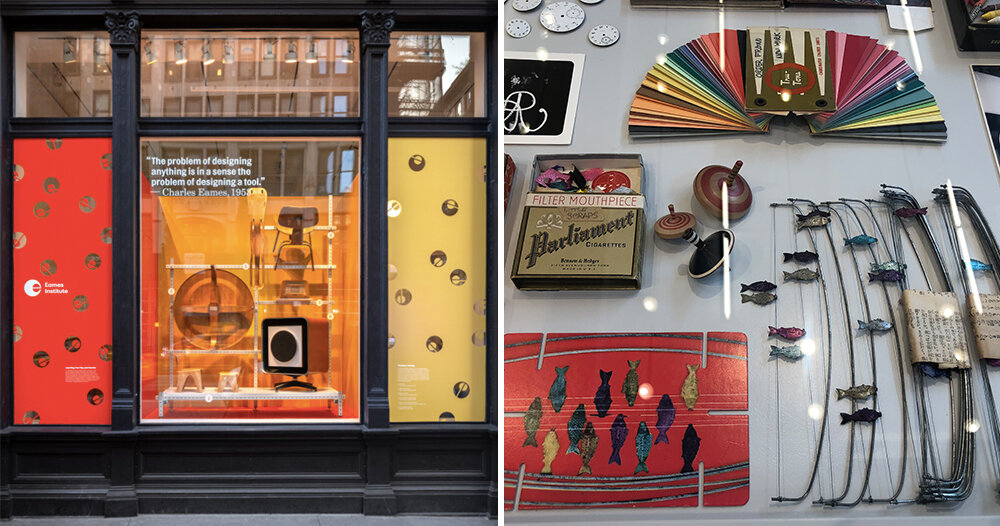 The Eames Institute celebrates its first pop-up exhibition at the Herman Miller Flagship for NYCxDesign. The location of the installation is significant given the designers’ long relationship with the company that manufactures all Eames-designed furniture in the United States, in particular the iconic Eames chair and ottoman, and biomorphic shell chairs .
The Institute was founded by Charles Eames’ granddaughter, Llisa Demetrios, along with AirBnB co-founder Joe Gebbia (see designboom cover here), to celebrate the thousands of artifacts designed and accumulated by Charles and Ray, then collected by the family. These objects include iterative “sketches” of furniture, boxes of scrap paper, notes, Polaroids, and most importantly, toys. The Eames Institute is currently in the process of organizing and documenting this massive collection of small objects, and aims to show them formally in a comprehensive exhibition. This pop-up installation – visible until May 22 – illustrates such a display.

What are the limits of our problems?

While the Eames Institute (see here) installation at the Herman Miller flagship in New York (see here) transports viewers back in time, it’s also a reminder of the timelessness of the duo’s design processes – they explored design solutions to continually overcome their generation’s problems. The Institute notes that when Ray and Charles Eames were asked ‘What are the limits of the design?’ they responded by reversing the question: ‘What are the limits of the problems?‘ The duo overcame material shortages and made good design easier to manufacture and more accessible.

The institute celebrates this approach today as a source of inspiration for young designers facing a new era of problems to solve.

The Eames Institute recently partnered with Brooklyn-based Standard Issue Design (learn more here) to create a series of three window displays for Herman Miller’s New York flagship. Each street-facing exhibition highlights a different aspect of the Eames’ philosophy and craft, including their explorations of molded plywood, their graphics, photography and film, and their highly iterative processes.