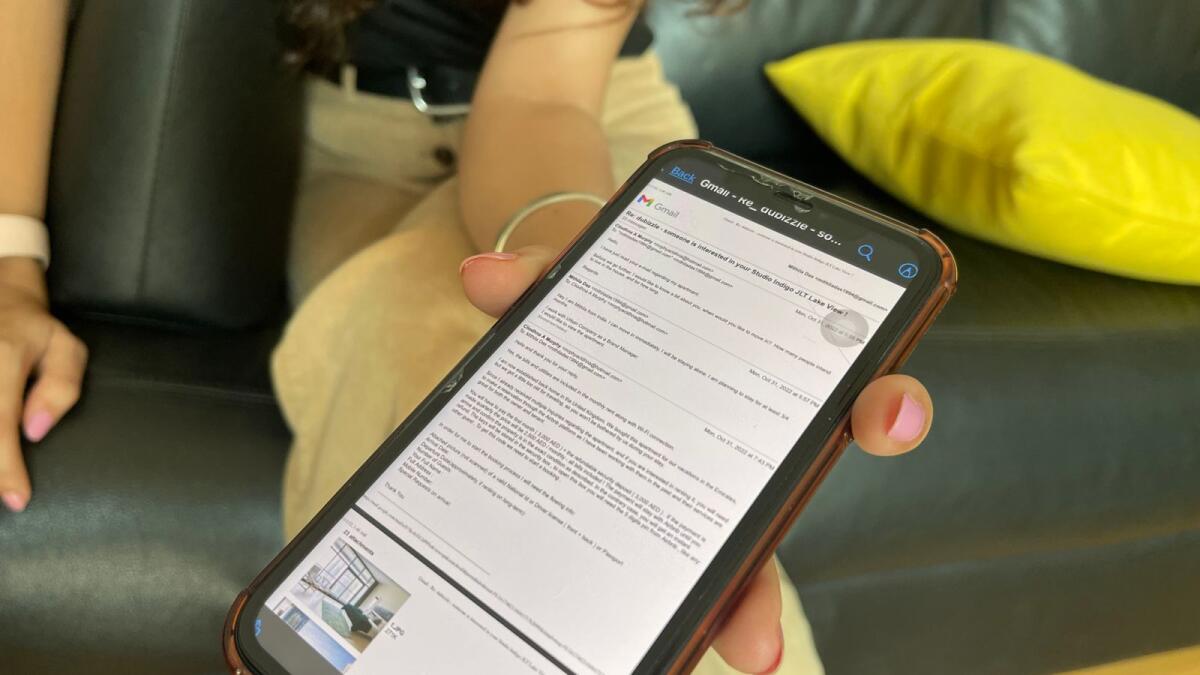 Dubai newcomer Mansi, 28, was thrilled. She had a fantastic rental agreement and was looking forward to moving into her new apartment.

The Indian manager was house hunting last month when she came across a listing of properties on Dubizzle that seemed to tick all the right boxes.

The tastefully furnished studio in Jumeirah Lake Towers was just a block from his office. At Dh3,000 a month, including utilities, WiFi and cooking essentials, it was a bargain, Mansi thought as he looked at the photos accompanying the listing.

The apartment had floor to ceiling windows offering a panoramic view. There was also a balcony with a pair of nice chairs and a table. 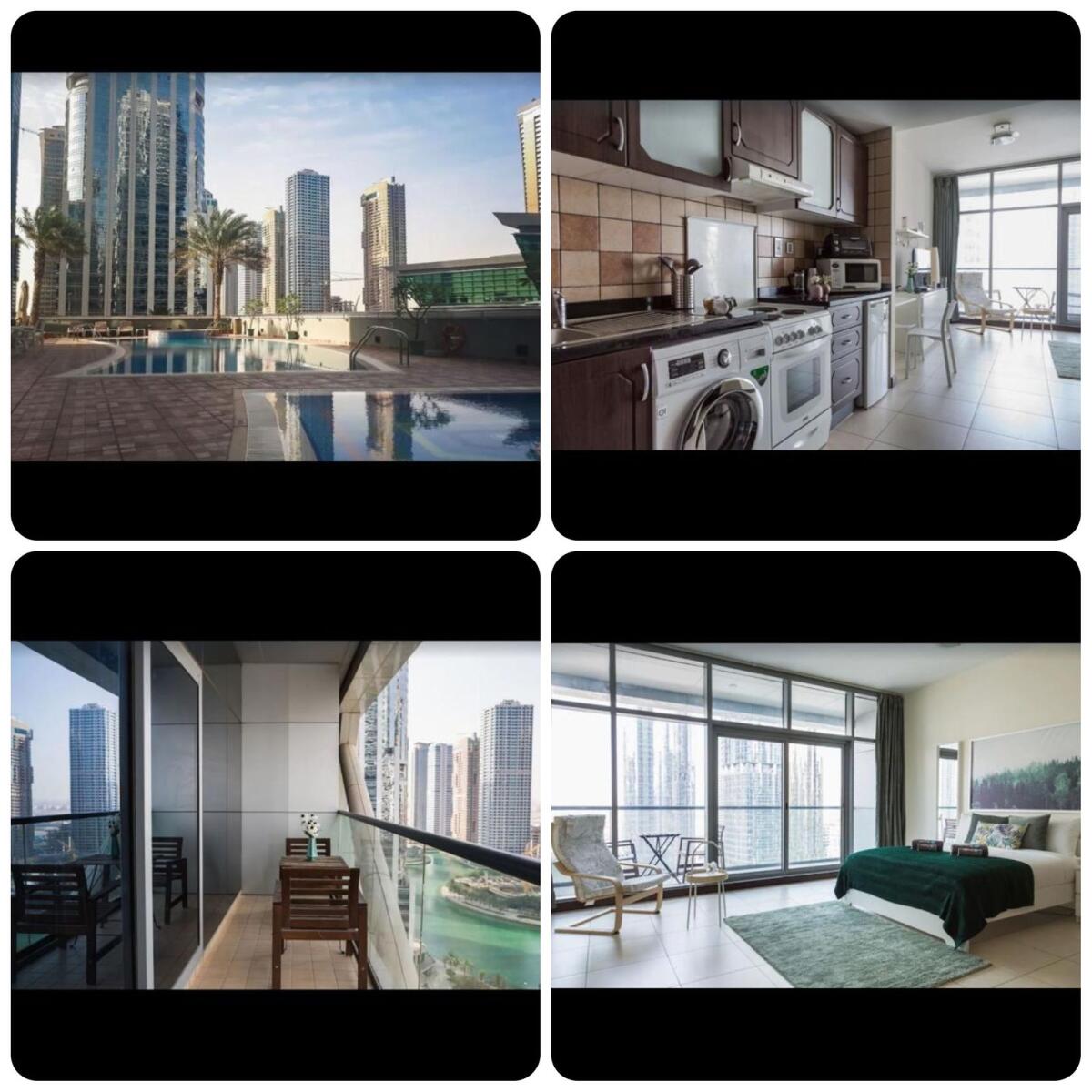 It was exactly the kind of place Mansi wanted. The email exchanges with the “British owner”, Cliodhna A. Murphy, had been reassuring.

“I am now established at home in the UK. We bought this apartment for our holiday in the Emirates, but have become a little too old to travel, so you will not be disturbed by us during your stay,” Murphy wrote on October 31.

Mansi was told she had to book the apartment through Airbnb by paying Dh6,000. Half of this sum was intended for the advance payment of the rent covering the first month of the rental. The remaining Dh3000 was a refundable security deposit.

“Payment will remain with Airbnb until you arrive and confirm the property is in the exact condition described. Otherwise, you will get an instant refund,” Murphy said in a follow-up email.

In order to start the booking process, Mansi was asked to share her photo, full name, address, mobile number and arrival and departure dates. 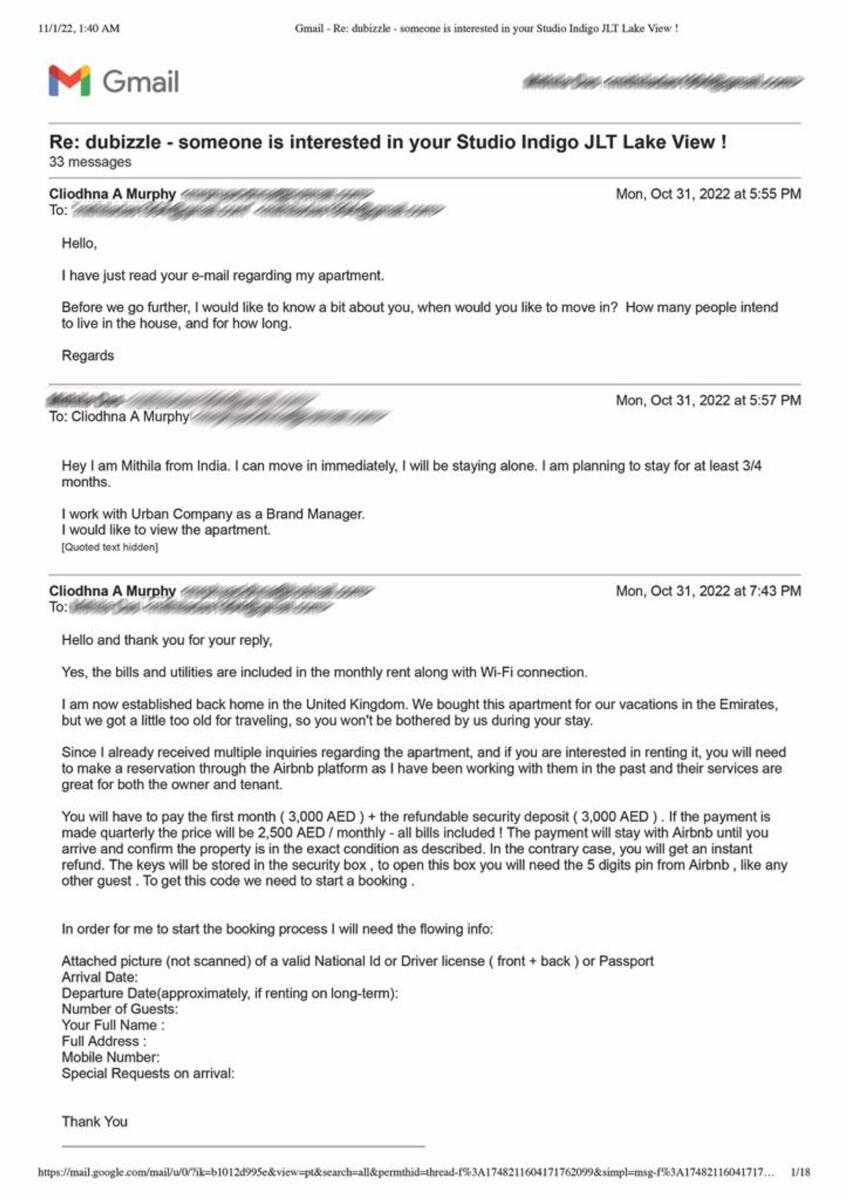 She then received a booking link.

As a frequent Airbnb user, Mansi saw nothing wrong.

She had used the online market several times – the most recent being for a short stay at home in Europe.

“It all felt like standard practice,” Mansi recalls. She should have known better.

In the end, the booking link sent to her didn’t take her to the real Airbnb website, but to a cloned page, with fabulous reviews and top ratings of the property by satisfied guests. . 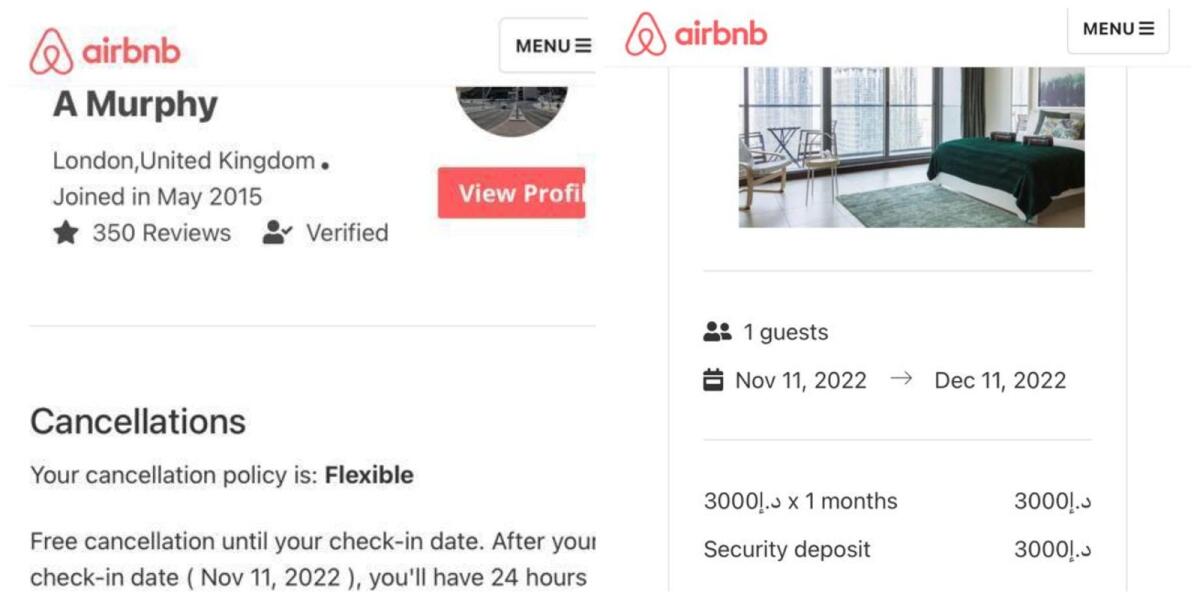 Barring a tiny change in the URL, the fake site looked so deceptively similar to Airbnb’s website that Mansi didn’t think twice before paying Dh6,023 with his debit card.

She was notified of the transaction by her local bank via text message.

Bizarrely, the same amount was deducted from his account twice for transactions that Mansi claims he did not authorize. 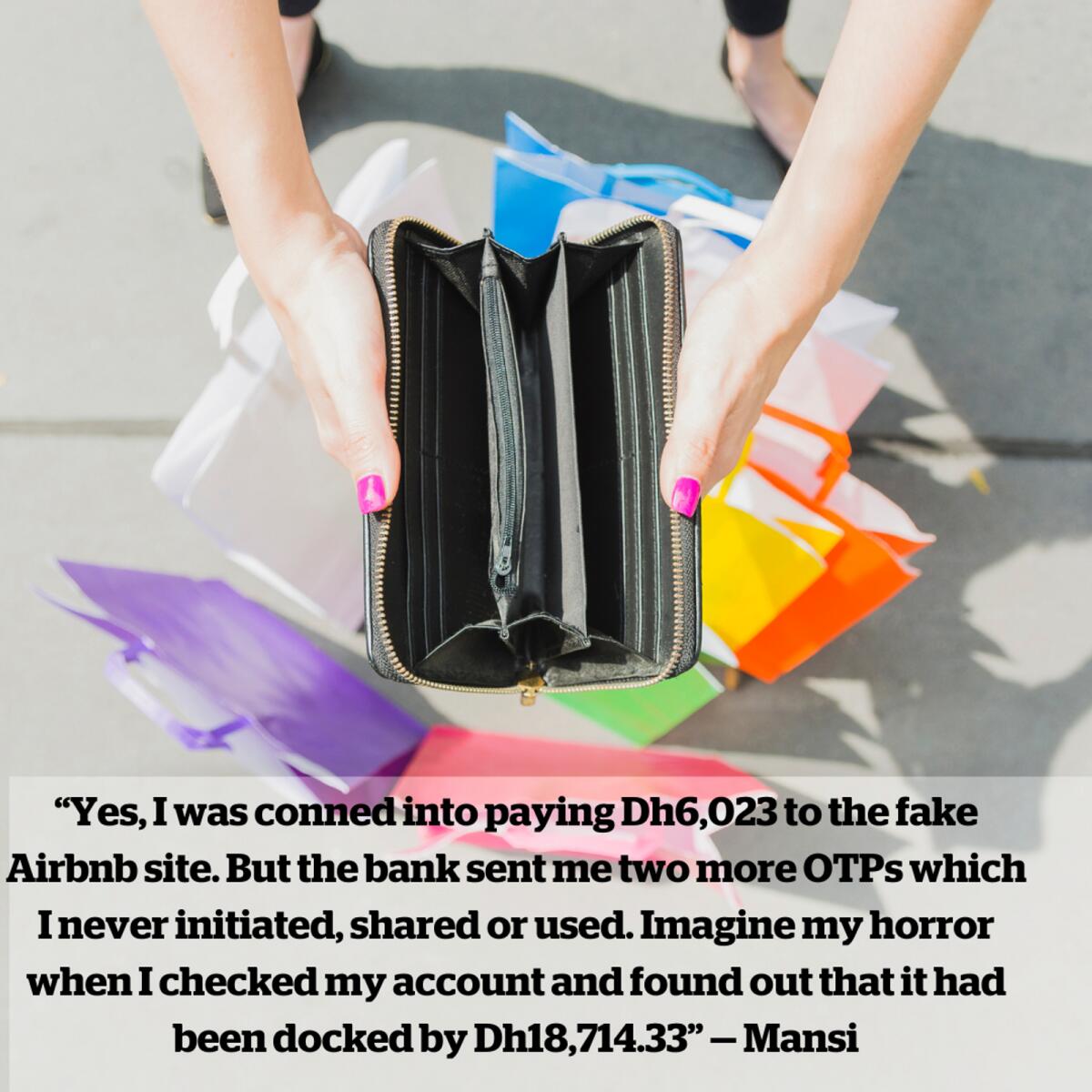 “I get an SMS from the bank every time I use my debit card. But in this case, no SMS or email was received by me confirming the two unauthorized transactions,” said Mansi, who later filed a dispute with the bank.

In an email response to a Khaleej times question, the bank said it followed “proper procedures” and helped the victim “to the fullest extent possible.”

He said the group’s customer experience team had been in contact with the victim and “provided him with the necessary clarifications”.

However, Mansi is far from convinced.

“I am puzzled why the bank did not report any of these transactions given that they were initiated in foreign currency against a crypto merchant. Ideally they should have sounded the alarm as the same amount was deducted three times in a row,” Mansi said. She had moved to Dubai in August and was saving money to make a down payment on a house in India.

More than five million people around the world have fallen for fake listings on rental sites, according to the Better Business Bureau, a nonprofit focused on promoting market trust. Fake Airbnb sites have also hurt several Dubai residents this year. 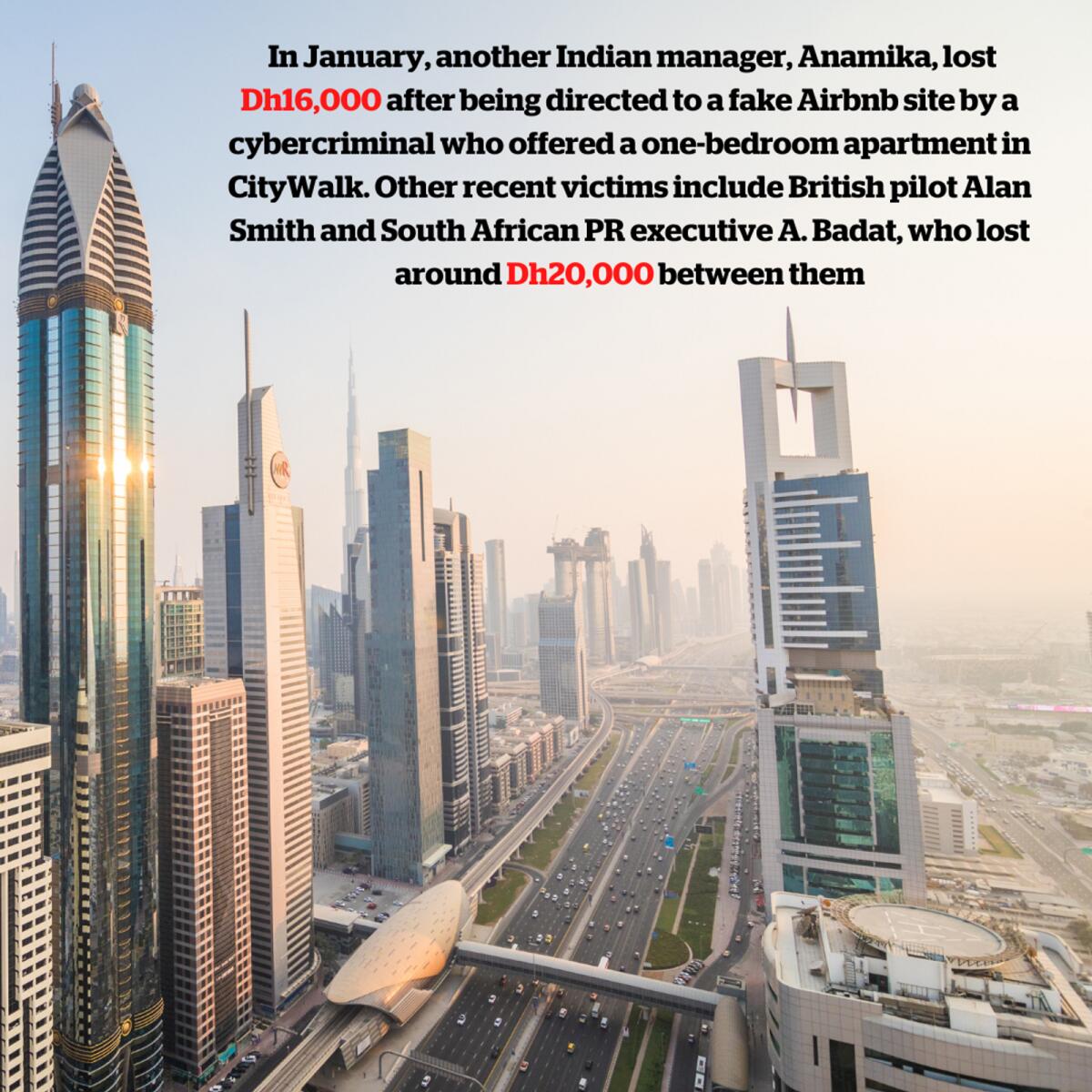 Like Mansi, they were tricked into thinking the properties were owned by an elderly British couple based in the UK who were too old to travel and would not disturb them during their stay.

The victims still have one thing in common. All of them made a payment on the fake site through the same local bank.

None of them got any money back. 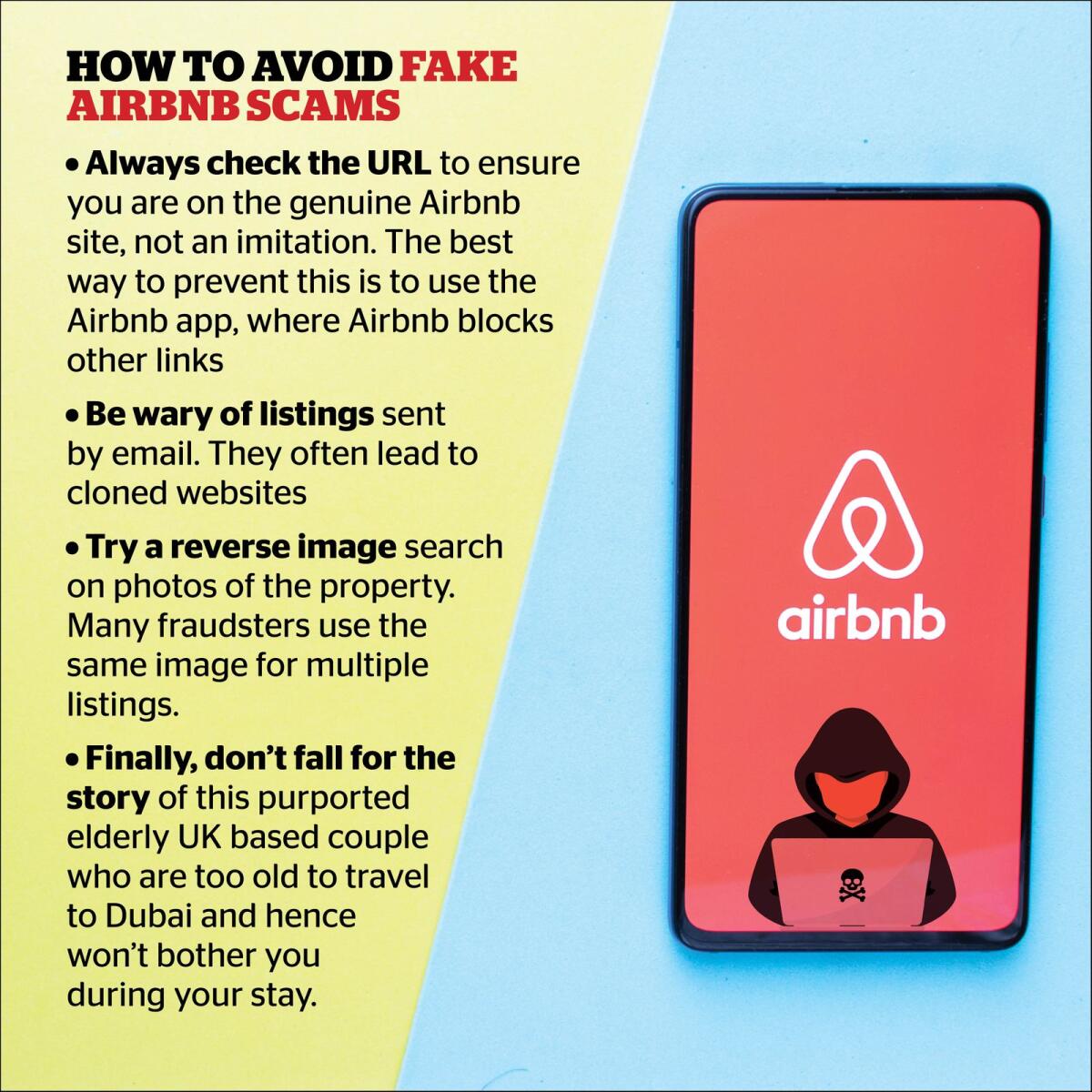 (Name of victims changed on request)