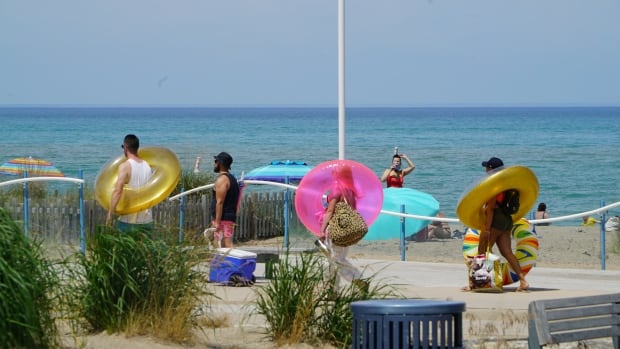 The tourist resort towns of Grand Bend, Port Franks and Ipperwash, Ontario, are seeking to clamp down on Airbnb and other online short-term rental services that some say are driving up real estate prices and changing the very fabric of their communities. .

Councilors for the Municipality of Lambton Shores, which presides over the three lakeside towns, vote on Tuesday on a draft bylaw to restrict short-term rentals with licenses, occupancy limits and a helpline for complaints 24/7, paid for by license fee, for residents concerned about noise, litter and large gatherings.

The proposal comes after months of public consultation, during which officials polled residents and landlords through mail, online surveys and virtual meetings.

According to the resultswhile most people felt that short-term rentals were an important economic driver in the sense of bringing business to town, they were also concerned about excessive noise, large gatherings, and issues of litter and waste. resulting septic tanks.

Beyond that, Lambton Shores Mayor Bill Weber told CBC News on Thursday that the number of short-term rentals in the municipality, which staff estimate at 300, has reached a tipping point and has begun to fraying the very fabric of local neighborhoods.

“One of the things I hear a lot is that all of our homes are sold and they’re all on short-term rentals.”

“There’s no sense of community anymore. So you never know your neighbors and there are never enough neighbors because the houses change all the time.”

The demand for recreational properties in cottage communities is not limited to Grand Bend, Port Franks or Ipperwash, it has skyrocketed across the province.

A recent report from Royal LePage indicates that prices for waterfront properties in Ontario have climbed nearly 35% since last year, compared to a national average of 21% and the real estate company said prices should see further gains two digits. in 2022.

Part of what’s driving this demand is online home-sharing services like Airbnb, whose short-term renters pay up to $475 a night to be steps from the beach, which is also lucrative for owners that it is a drain on the supply of long-term rentals and single-family homes.

It also blurs the line between residential and commercial land use, creating a thorny issue for regulators — a proposed bylaw Lambton Shores hopes to resolve with license fees ranging from $500 to $2,500 and a cap on the number of guests to two per room, plus two, up to a maximum of eight guests per house.

CBC News contacted Airbnb for comment Thursday, but a spokesperson did not respond at press time.

We don’t like the idea of ​​us being regulated or having to pay fees, but maybe it’s necessary for the greater good.– Christine Steiginga

“I don’t feel affected by this settlement,” said Christine Steiginga, a Grand Bend cottage owner since 2016 who lives in the Greater Toronto Area and rents out her vacation property for $2,750 a week.

“I grew up in the area as a kid, there’s always been this dynamic that people care about party people.”

“We don’t like the idea of ​​us being regulated or having to pay fees, but maybe it’s necessary for the greater good because it brings non-compliant people to us.”

Steiginga said that’s why she takes a lot of time to get to know her tenants and build relationships with them and her neighbors in the beach community and as a result most are repeat customers and she’s fully booked by Thanksgiving. .

“We don’t live in Grand Bend,” she said. “We don’t want problems that we have to drive around for hours to solve.”

If Lambton Shores councilors vote to accept the proposed bylaw on Tuesday, it likely won’t come into full effect until next summer, as the municipality has yet to set up a helpline and most Short term rentals have already been booked for the year.