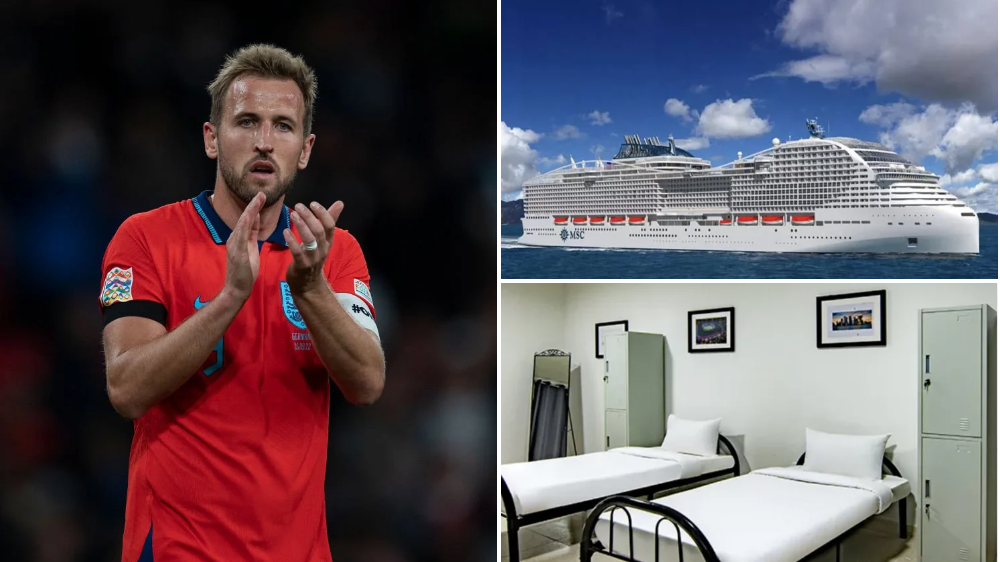 If you go to the Qatar 2022 World Cup website, you will be greeted with the claim that it will be ‘the most convenient FIFA World Cup ever’. That’s true when it comes to travel – England fans won’t have to worry about trips to Manaus or Kaliningrad like previous World Cups.

The two furthest stadiums are 70 km apart while Doha and its surroundings are well served by metro and shuttle buses.

But everything else? Not really.

Even the average Panini sticker album cost of this tournament has been estimated at £870.

The price of return flights from London Gatwick to Hamad International in Doha is currently fairly constant throughout the tournament.

An influx of English fans in Qatar is expected if England progress through the group stage, as in Russia four years ago. Currently, flights from Gatwick to Doha before the last 16 and back after the final cost £838. That price will skyrocket if Gareth Southgate’s men win their first games convincingly.

The cheapest accommodation is around £80 a night in a two star new build. It is located southwest of the town of Al Wakrah, where England will be based throughout the tournament.

Priced as for the ‘budget conscious traveler’ this is the most basic accommodation within some distance and almost £100 cheaper than anywhere else. For your money, you get two steel single beds and a small bathroom without any of the usual amenities, in a decorative style that could be called prison chic. Listings elsewhere suggest bed linen and towels are not provided.

The next cheapest option is the most basic of the two cruise ships docked in Qatar. It will be £175 per night for bed and breakfast accommodation, although rooms are sold out for England group stage match dates. Rooms on the most expensive ship cost upwards of £350 a night.

Another option is pre-fab huts, erected in designated “fan villages” in the desert. They cost around £200 a night. The official website boasts that these cabins come with a refrigerator, bed linen, towels, and two bottles of water per day.

All officially listed hotels except one are fully booked. One bedroom apartments are listed on Airbnb for up to £6,000 per night.

Cheaper accommodation is available in neighboring countries, with the United Arab Emirates being particularly popular with English fans. Rooms in Dubai, the country’s most populous city, are available for almost £100 per night. However, this comes with the additional cost of return flights to Doha on matchdays, which are currently listed at £211.

Despite all the talk about when and where fans will be able to drink alcohol in Qatar, little has been done about the cost of such drinks.

Although alcohol is not illegal in Qatar, a no-tolerance policy exists throughout the Gulf country. Being drunk in public is illegal. Due to heavy alcohol taxes, a pint of beer will cost fans between £12 and £15 in fan zones, hotel bars and on docked cruise ships. The best available prices will be £7 a pint, offered by some happy hour deals between 5pm and 7pm.

The largest fan zone is the Al Bidda Park FanFestival, with a reported capacity of 40,000 people. This one will only sell Budweiser, the official beer sponsor of Fifa, between 6:30 p.m. and around midnight, with prices not yet confirmed.

Glastonbury Festival fans will recognize Arcadia, the 50-ton fire-breathing spider-and-rave venue that will be flown in for the World Cup. It would serve booze from 10 a.m. to 5 a.m. with a lineup of dance and house DJs ready to play. Indoor drink prices have not been announced, although entry will cost £75.

Bringing alcohol into the country is also a big no-no, with possible fines or deportation for those arrested.

Tickets have been divided into four categories, with special rates for Qatari residents. For international fans, the cheapest tickets for group stage matches are 250 Qatari rials, or £64.22 (at the current exchange rate…). These are the most expensive base prizes of any World Cup tournament in history.

Knockout matches will cost fans much more. The cheapest quarter-final tickets are close to £200, rising to £335 for the semi-finals. Final tickets will cost international fans between £500 and £1500.

Tickets will also allow fans access to more than football matches. A legitimate ticket is a prerequisite for purchasing a Hayya card, the Golden Ticket for this tournament, which costs around £25.

From November 1 to December 23, only Hayya card holders and official residents will be able to enter Qatar. Accordingly, flying just to “soak up the atmosphere” will not be permitted. The standard processing time for a Hayya card is seven business days, which means fans will either have to plan ahead or pay hefty processing fees if they want to spontaneously fly out to watch their country.

As in most places, food prices vary wildly in Qatar. Although prices have not been made public, it is likely that food in fan zones and on cruise ships will be inflated due to the lack of other options.

Numbeo, the world’s largest cost of living database, estimates that a mid-range meal for two will cost around £50, with a McDonalds meal costing around £6.50.

As an England fan, following this World Cup “on the cheap” will not be an option. To fly to England’s three group stage games and stay in Qatar for those 10 days, flights will cost £893 and the most basic accommodation an additional £800.

The cheapest tickets for these matches will cost £192.66, with an additional £25 for a Hayya card. Adding a conservative £50 a day for food and drink, this brings the cheapest possible total for a fan attending England group matches to £2,410.66.

That is not very practical.

Veridooh’s Mo Moubayed explained what to expect in 2023

Despite criticism, Qatar 2022 promises a spectacular football spectacle | The…