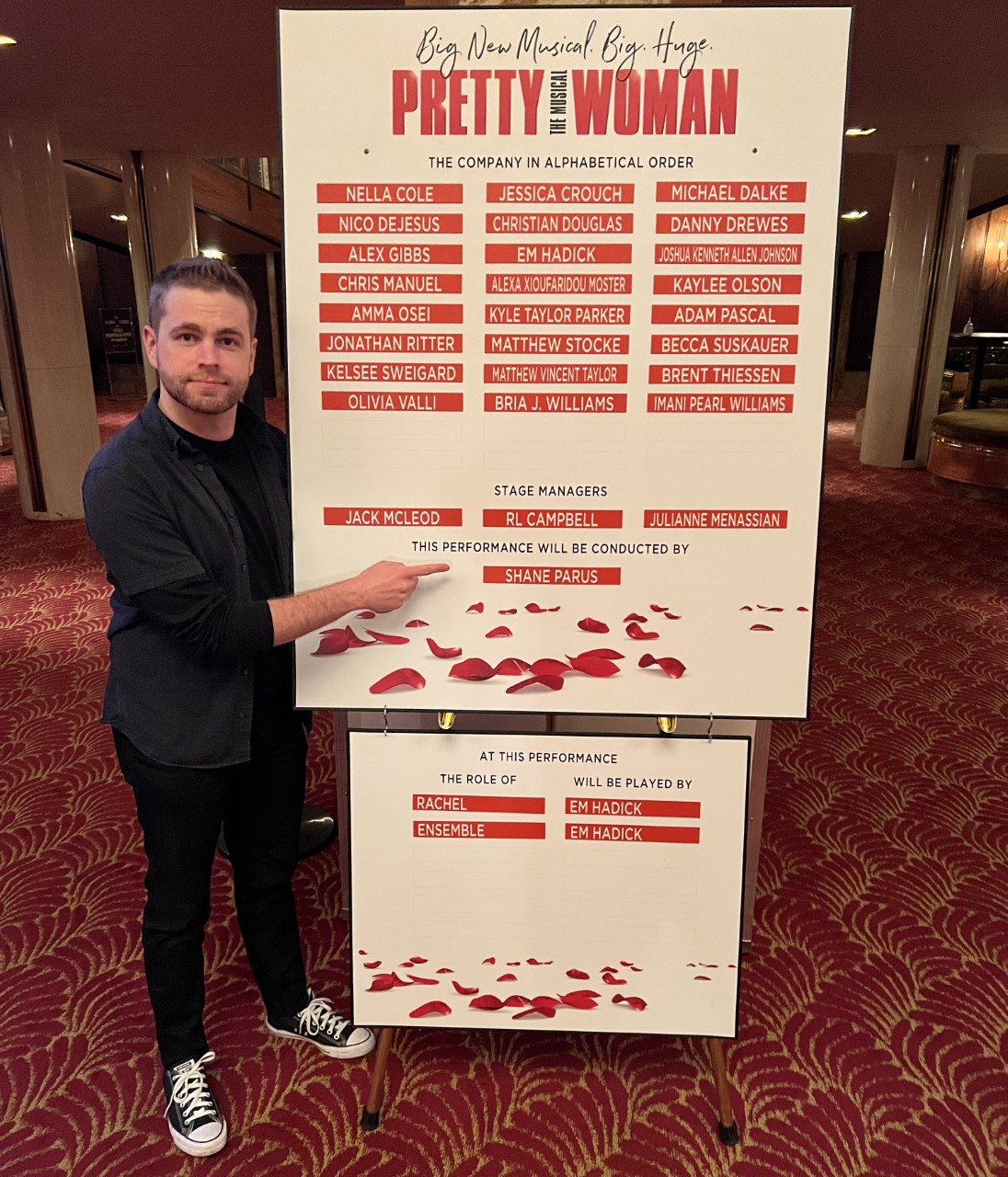 MHS graduate takes Broadway musical tour of US and Canada

A Manistee High School graduate is on the road again for the sixth time touring with musical productions.

Parus said the tour kicked off in Providence, Rhode Island in September, then the cast and crew traveled to Cincinnati and Detroit in November.

“The whole family came and it was also my bandleader debut in Detroit,” he said. “So it was a really special complete connection to Michigan on many levels (type of experience).”

Parus noted in an email that his parents Matt Parus and Sandee Jones, both of Manistee, have “always been extremely supportive of my musical adventures”.

The tour continues this month in Texas, then continues in Florida, California and Canada before concluding in California on May 7.

Parus started playing the piano by ear around the age of 7 before taking piano lessons at Manistee.

“Also during this time, I started in a fifth-grade band at Manistee playing percussion. Throughout middle school and high school, I played percussion in the band,” he said.

He expressed his gratitude to his teachers like former MHS band manager Cindy Swan-Eagan and Joy Smith, who was his percussion teacher at Manistee.

He also began acting, playing the piano and conducting music with performances at the Ramsdell Theater in Manistee in 1998.

“These people took a chance on me and was it okay? I do not really know. Maybe, … but those people were so nice to let me do that,” Parus said.

He also says after joining the “Pretty Woman” performance that he’s been working with someone he’s long admired from the “Rent” and “Aida” productions: Tony Award and Drama Desk Award nominee Adam Pascal.

“I used to listen to it all the time on the original cast recordings of ‘Rent’ and ‘Aida’ – the Roger Davis original in ‘Rent’ and the Radames original in ‘Aida’ – when I was growing up in Manistee, so I started working with him every night is an absolute treat. He’s a great guy!” Parus said.

“So I went to school for percussion, but I play piano and keyboard as work now,” Parus noted.

That’s because there are more job opportunities in piano than percussion, he said.

When he graduated from Western, he got a job on cruise ships as a percussionist.

“Then they cut the percussion position but they had two keyboards and I said, ‘You know what, I always like to work on cruise ships, can I play the keyboard? ‘” Parus said.

Since then, Parus has been involved in works like “Beauty and the Beast”, “Memphis“, “Fiddler on the Roof”, “We the People” and “The Sound of Music”.

The travel aspect of touring shows is a big draw for Parus.

“Almost every Monday, it’s a trip to the airport to get on the plane to go to a new city. It’s exciting and exhausting at the same time, but new cities are fun,” he said. “I love staying in hotels, I love finding new Airbnbs to stay in different cities.”

The group also spends a lot of time together working and traveling.

“Fortunately, all six of us in the band really get along,” he said. “But the group, we kind of have our own group that is getting really, really close together. Whether it’s having dinner before the show, hanging out after the show, sharing rides together at the airport on Mondays, it’s a lot of fun. You also live mainly with your colleagues.

Finding personal time is also important with a touring setup, he said.

Parus has not returned home since September 2021 as he is on tour on the road.

When it comes to shows, he said he wasn’t at a point yet where he could be picky about which ones he did.

“If an offer comes in, it’s work, so I’ll take it,” he said. “But I love telling stories, I love the idea of ​​telling stories through music and that connection with the band, the orchestra, the actors on stage and working together to tell that story.”

Parus’ advice to anyone looking for a similar career is to listen to as much music as possible.

“You can never know enough, especially (in) the musical theater world…which has a wide genre of styles, especially the newer stuff can be a lot of rock music,” he said. “‘Pretty Woman’ is written by Bryan Adams, the Bryan Adams you know from the 80s, the rock star of the 90s, the music of ‘Summer of ’69’.”

He said that meant that every night Parus played rock ballads.

“But if I hadn’t grown up listening to classic rock, I wouldn’t know who Bryan Adams was. So I’m able to know that music and know that ultimately (that song “Pretty Woman”) is just a Bryan Adams song. So I have to play it like I hear it on the radio.

He also offered tips for playing any opportunity that presents itself.

“When I was in college maybe, the Portage Point Inn in Onekama made me play the piano for an Easter brunch, for example. I don’t even know how it happened, but I just sat at the piano for three hours and played music,” he recalled. “I have to think that somehow helped me get to where I am now.”

This Best-Selling Amazon Heater Is Just $35

Renting a room can boost your income, but only if you play by the rules – The Irish Times