Every day Kirste, Dan and producer Leon serve your daily dish of news!

Mom of quadruplets paints her babies’ nails to tell them apart.

Gaby and Patrick Hagler decided to try for their fourth and last child. But during their 12-week checkup, they discovered they had quadruplets. One in a million chance! In June 2022, they welcomed their four boys Adam, Bennett, Coby and Dane into the world. “I sometimes confuse the quads because Bennett and Coby look pretty identical – I have to paint one of their fingernails to tell them apart.

The largest jack-o’-lantern in the world

The largest pumpkin in US history broke the US record for its size at the World Pumpkin Weighing Championship. It has now been carved into the largest jack-o’-lantern in the world. 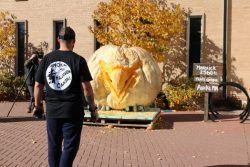 A couple discovered a hidden camera in their Airbnb.

The couple were traveling through Spain and booked an Airbnb near Madrid. Photos online showed a nice clean house, but the reality was quite different. It was dirty, run down and dead flies all over the floor. But they were even more shocked when they noticed a camera disguised as an air freshener on the wall. After complaining to the owner, he was told that cameras were allowed for security reasons. They managed to get a full refund and were reimbursed for the extra expenses.

What did you think of these Newsli stories? Let us know by texting or send us a message on social then listen to the full chat below!

This year I’ve sailed away from my friends and family, and straight out of my comfort zone – The Irish Times