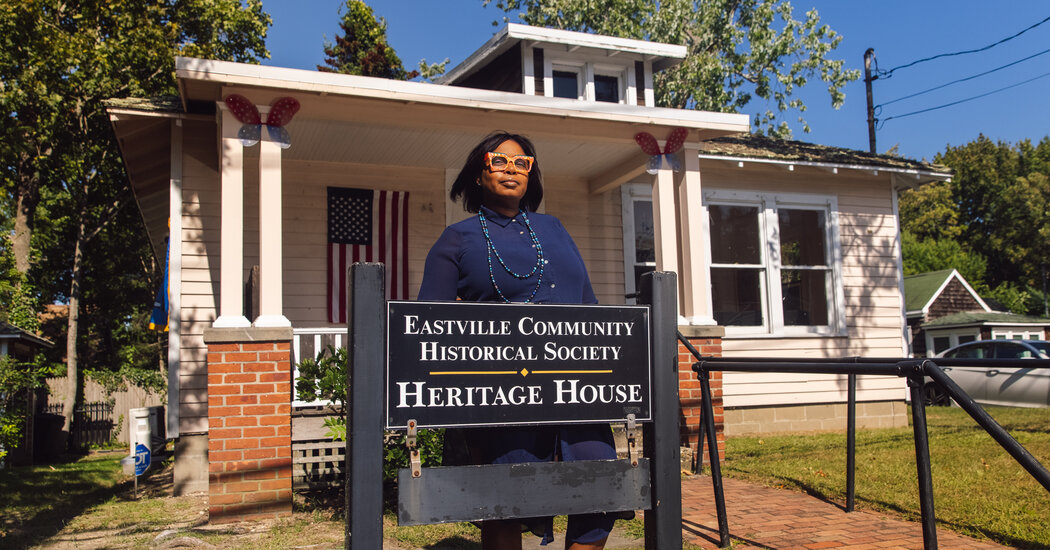 SAG HARBOR, NY – When Storm Ascher, 27, artist and founder of the pop-up gallery Overlay, moved here from Los Angeles in 2019, she was struck by both the warmth and acceptance of the community and how almost always she was the only black person in a room.

Then she read Colson Whitehead’s autobiographical novel “Sag Harbor” and learned that the house she lived in was only two blocks from Eastville, one of the oldest black communities on the South Fork of Long Island, and which has offered evidence of multicultural integration among Blacks, Montauks, and Shinnecocks, as well as those of European descent, since the 18th century.

And it was about a mile and a half from Sag Harbor Hills, Azureest, and Nineveh (aka SANS), Black Beach enclaves established in the 1930s and 1940s that have attracted successful professionals and New York City cultural lights for generations. .

“I was like ‘where is this town he’s talking about?’ And I look on a map and it’s in front of my house! I was like, are you kidding me? said Ascher, laughing.

Ascher’s explorations made it clear that the beach enclaves of Eastville and SANS face the pressures of real estate development and the passage of time. A number of generally modest structures built by working-class and middle-class families in the 19th and 20th centuries, some purchased from the Sears Catalog, have passed from the hands of the families who originally bought them. These houses were demolished and replaced with much grander buildings, sometimes converted to short-term rentals, which shook this long-standing and tight-knit community.

Allison McGovern, an archaeologist, anthropologist and cultural resource consultant who conducted an inventory of structures at SANS and Eastville in 2017, says 12 historically significant buildings were demolished in the years that followed.

After meeting Georgette Grier-Key, the CEO and Chief Curator of the Eastville Community Historical Society, and artist Michael Butler, a board member of the organization whose family has been in Sag Harbor for generations, Ascher decided to focus on third anniversary pop-up exhibition on Eastville. Half of the net proceeds from the online sale through December 31 will go to participating artists, most of whom are black, and half will go to support the preservation and digitization of the Historical Society’s archives.

Only a few of the participating artists were aware of the long-standing African American presence in Sag Harbor and Eastville. “I wanted the theme of conservation to be the black utopia, joy, recreation, luxury, things that shouldn’t be part of the black experience but have persisted here since the 1800s,” said Ascher.

The participants took very different approaches to the theme of the show. A photograph of Chinaedu Nwadibia, “Ben & Barry” is a witty commentary on African American achievement, showing a toy figure of Benjamin banneker, a free black man from Baltimore who, at the end of the 18th century, used his talents as a mathematician and astronomer to write popular almanacs, set with one foot resting on the memoir of former President Barack Obama, ‘The’ audacity of hope ”. (The artist created the work after finding both items in his rented Airbnb in Lagos, Nigeria.)

Audrey Lyall, a Brooklyn-based artist, was struck by Ascher’s emphasis on luxury and wholeness. She gifted a painting of a woman pasted with faux snakeskin, rhinestone-tipped acrylic nails, and two different value markers – cowry shells and a $ 10 bill.

“I had no idea there were historic black and native communities in the Hamptons – we still think this area is very white, very wealthy,” Lyall said in a telephone interview. “It almost seems inaccessible to black people and other people of color.” She added: “I wanted to know more about it myself.”

Butler’s work, “The Prize Catch”, forms a kind of anchor for the show. He describes his small, highly detailed paintings as folk art, drawing inspiration from Eastville oral histories collected over the years. He knows he should write a book, said Butler, “but right now my paintings are my form of storytelling.”

Banners of each of the 17 works of art hang from the cemetery fence in front of St. David AME Zion, a landmark overseen by the Historical Society, “to create a juxtaposition between our ancestors and those who are currently working “said Ascher.

Founded in 1840 and the oldest extant black church on Long Island, it served a congregation of African Americans, members of the Montauk Confederacy, and Irish Americans employed in the city’s once thriving whaling industry. St. David’s is believed to have been a stopover on the Underground Railroad, and Eastville was later known to be a safe harbor for those evading Jim Crow laws in the South.

The Superposition pop-up exhibition and sale will be an annual event to bring resources to the Historical Society, which has largely survived through volunteer efforts since its inception in the mid-1980s.

“As every structure is converted, demolished or whatever, you just lose that sense of history,” Butler said of the city. “As people die or move away, you have fewer and fewer people who are going to know about these stories.”

In the end, you also lose key pieces of material culture and historical documentation. In addition to deeds, family albums, cards and other documents, the center holds a large cache of tintypes of the early Montaukett and African American families who lived in Eastville. Some were found nailed to mend broken planks in one of the neighborhood’s old houses – a signal of the need to preserve these modest huts, which have cultural significance beyond their architectural value, said Dr Grier- Key.

As you might expect for a place that has drawn people like Lena Horne, Harry Belafonte, and Langston Hughes, artists have always had a presence in Sag Harbor. Abstract painters Al Loving and Frank Wimberley were part of a group called Eastville Artists in the 1970s. Wimberley, in particular, has a long association with the Eastville Community Historical Society and, Dr Grier-Key noted, made the sculptural mirror that hangs in the center restroom. The late Reynold Ruffins – graphic designer and founder of the legendary Push Pin Studios – along with his wife, Joan Ruffins, and daughter Lynn Ruffins Cave, were on display here in 2018.

Dr Grier-Key, Butler and Ascher hope to begin acquiring works for the Historical Society’s collection. When I ask her who is on her wish list, she quotes, among others, the artist Tomashi Jackson. Jackson’s recent project commissioned from the Parrish Art Museum, “The land claim”(2021), drew on the stories and current experiences of Black, Indigenous and Latino residents of the East End of Long Island.

As an example of what the Eastville Community Historical Society could accomplish, Dr Grier-Key and Ascher cite the Southampton African American Museum, which opened to the public on June 17 under the direction of Brenda Simmons. In addition to a historical exhibit, the museum’s inaugural program included an exhibit with works by Sanford Biggers, Melvin Edwards, Theaster Gates, Glenn Ligon and Kara Walker, on loan from collector Peter Marino, whose foundation is located nearby.

Ascher has avoided opening up a physical gallery space on principle because of how “artists’ quarters are a catalyst for gentrification,” she said. The opportunity to contribute to the establishment of permanent historical archives in Eastville is therefore particularly important to her.

“I could go there with a sign and say ‘don’t gentrify this black community, cancel the hashtag’ or I could actually do something more permanent,” she said. “I have a feeling that with something like that, you want to preserve something.”

UPDATE 2-Omicron rolls back hopes of recovery in airline industry