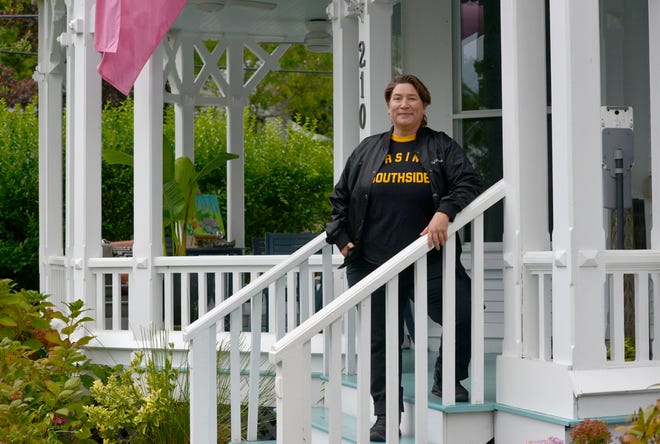 PROVINCETOWN — Provincetown comedian and actress Kristen Becker started the nonprofit Sass Summer in 2016 after hearing the story of Teddy, a gay teenager from his hometown of Shreveport, Louisiana, who graduated from high school early due to bullying.

Becker was living in Provincetown at the time, but had just completed a tour that was certainly the first of its kind: a part-preaching, part-comedy show across the American South with the surprisingly progressive pastor Jay Bakker, son of the right wing televangelists Jim and Tammy Faye Bakker.

Teddy’s story made him think: what if young gay men from all over the country could come and work in Provincetown for a summer?

The city is both an LGBTQ+ hub and in need of seasonal workers, two issues that could be addressed by a program for young gay men, like Teddy, who need an escape from an intolerant hometown, the support that a community like Provincetown can provide and employment.

“I started a GoFundMe and raised $2,500 in the first year, and we were able to subsidize travel and rent for three teenagers,” Becker said of the organization’s flagship 2017 summer season.

Fast forward five years, and Summer of Sass has expanded into sprawling seven-bedroom antique Victorian home in east Provincetownthanks to a private donation from a family who wished to remain anonymous.

“It’s pretty amazing,” Becker said. “A lot of people told me I couldn’t make it. There’s something really rewarding about knowing that something will live beyond yourself.”

After:Martha’s Vineyard welcomed 50 migrants. In El Paso, up to 2,000 migrants arrive every day.

Location will lead to year-round programs for young gay men

With this purchase, Summer of Sass will expand beyond the tourist season, providing housing, resources and job opportunities for gay youth in need year-round.

The house, now operated as a Stowaway bed-and-breakfast, was released in May. Only a few weeks ago, however, this mystery family contacted Becker with an interest in donating to the organization.

Becker brought six previous “sassers” to the meeting to share their experiences with the program.

The family was moved by their testimonies and told Becker they would buy the house for Summer of Sass, which is no small donation in a city known for its tight real estate market.

Becker said she hopes this act of generosity will inspire others in the affluent community to donate to local organizations and be an example of an out-of-the-box solution to Provincetown’s housing problems.

“I think it’s an eye opener,” she said. “I’m incredibly proud that we’re taking something that’s a weekly or a B-and-B and turning it into year-round accommodation.”

The ideas for using the house are endless: it could be a place for full-time residents or seasonal workers, or part of it could work as a cheaper Airbnb specifically for LGBTQ+ youth, or perhaps to be a place where a queer kid living in Boston who wants to spend New Year’s Eve in Provincetown but can’t afford it, can stay for a weekend, Becker said.

Or maybe even all of the above.

“We are developing this idea of ​​setting aside this space for this demographic, the most marginalized even in our community,” she said. “We eventually want to do outreach across the country.”

Summer of Sass takes over the building in October of this year, and the two participants of this year’s cohort are invited to stay for the winter.

Eventually, Becker hopes to house 14 or 15 Sasser, but that day is still far in the future as she determines full-time staffing options and general upkeep of the house.

After:Was the owner of the Womencrafts store in Provincetown able to purchase the property? Store owner Michelle Axelson has news

“I hope to open it in February,” she said. “I need a few months there to figure it all out and see what it’s like.”

Until then, Becker’s main goal is to raise more money for the organization.

“We have quadrupled our size, but along with that we have quadrupled what we have to provide,” she said. “It feels weird to ask for more, but that’s how you grow. We don’t have mortgages, but we have heating bills, electric bills, and eventually we want to have things like community programming. This donation is huge, but it takes a village.”

Becker said she hopes other organizers in Provincetown and beyond will see the success of Summer of Sass and “go for it.”

“I’m not special, you know, I’m comic, I’m not formally trained in nonprofits,” she said. “I’m hoping to engage the community in some sort of recurring community support, but anyone can do that. Go for it.”

To donate to Summer of Sass, visit their website: www.summerofsass.org.

Sarah Carlon can be reached at: [email protected] or on Twitter @sarcarlon