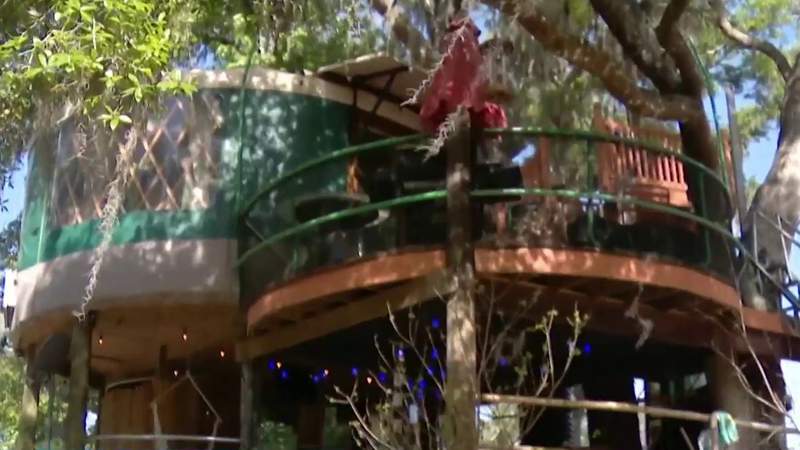 GENEVA, Florida – Nestled near Lake Harney is 25 acres nicknamed “Danville” which has quickly become one of the most popular places for Airbnb renters.

Dan Shaw is the mayor of this unofficial community, which offers a wide range of accommodation options.

“Airbnb corporate has decided that my wife and I are the most creative hosts in the world,” Shaw said.

A two-ton hydraulic garage door opens to the side of an unpretentious house to reveal an airplane hangar filled with its own downtown community, with a bar that hosts “goat happy hour” with Nigerian pygmy goats.

“Danville City Center“as it’s called, has a two-bedroom, two-bathroom guesthouse that comes with its own theater.

“You can’t duplicate it,” Shaw said.

Shaw’s adult playground in Geneva is also home to three other options for potential customers and tourists from around the world.

A quick drive through the property on a golf cart or Segway takes you to Man’s Cave, which he first built as a place to hang out with friends.

“They said you had to research Airbnb,” Shaw recalls. “So I looked and I said, ‘Who would like to rent my man cave?'”

A map inside the Man’s Cave adorns pins placed all over the world where guests come from, and his online listings have more than 1,500 reviews since he started listing on Airbnb in 2011.

Cave man Also has a working garage filled with classic cars, airplane parts, and is covered from top to bottom in lost pop culture.

“All the foreign guests will stay here because it’s Americana,” Shaw said. “Hanging motorcycles, planes and cars in the garage.”

If you’re looking for a little touch of the outdoors and a chance to sleep under the stars, Shaw has built a luxury yurt equipped with air conditioning, plumbing and Wi-Fi.

The most popular place for customers is nicknamed “The tree house“, a two-story, 15-foot-tall yurt set between two oak trees, with its own elevator designed to resemble a tree trunk. Need a hot tub? Only Shaw makes one with a jet engine. DC-10.

“It depends on what I found, or what my son found that day or what we are using,” he said. “That’s why you can’t duplicate it. I don’t know how you would find the things I put in it.”

Shaw is a longtime inventor and his work can be seen just about anywhere. A wall of 23 patents displays his work, including the automatic soap dispenser, automatic faucet, and automatic paper towel dispenser.

“We were ahead of our time,” Shaw said.

And Shaw’s not slowing down. In addition to the four existing options for guests, Shaw is also building four more, including a 19th-century Florida-inspired bungalow, an Airstream floating trailer that will sit on a pontoon, two refurbished Volkswagen buses that will recall Woodstock, and an airplane. .

“The Airstream will go in the middle (of the plane), then it can say ‘Dan-Am to the side,” he explained. “Some of these projects are too fun not to be done. What a great way to end a career. I meet some of the most interesting people from all over the world, all over the world.”

The cost for each of these rooms ranges from around $ 75 per night to around $ 150 per night. Danville also hosts around thirty weddings per year.

How to Airbnb your home in Dubai