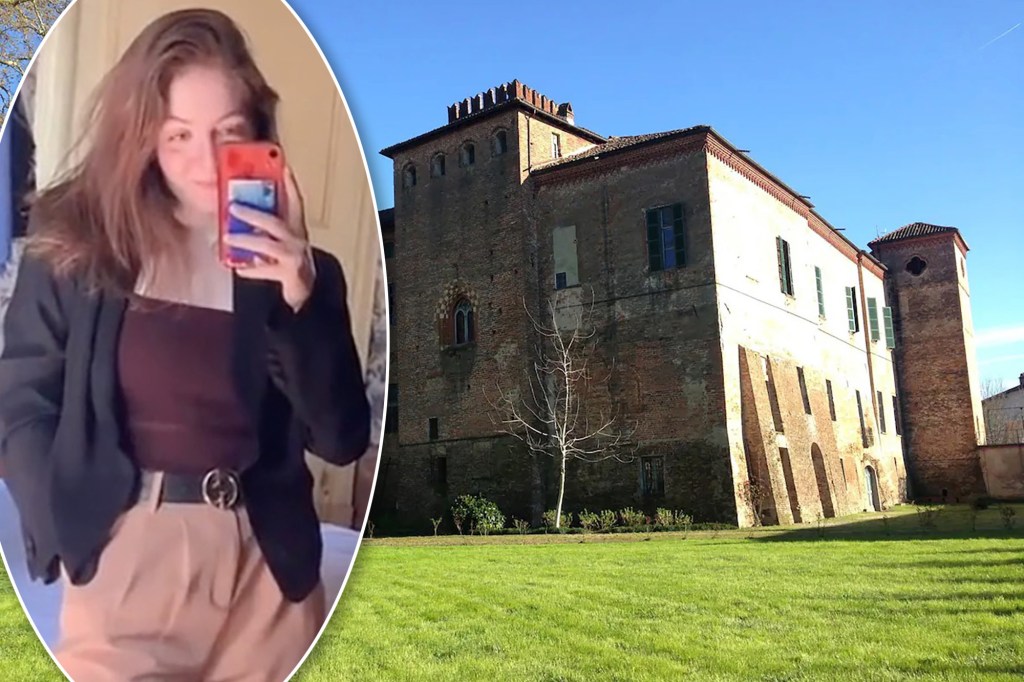 In the heart of Italy, a little-known medieval castle was passed down from generation to generation, that is, little known until a descendant of Sannazzaro obtained a TikTok account.

TikToker Ludovica Sannazzaro lives in a 10,000 square foot 12th-century Italian castle inherited from her father Giuseppe, and the 19-year-old used the app to show what it’s really like to live there.

“I like to fantasize about the past or pretend I’m someone in a TV series and movies,” Ludovica, who hopes to one day be a Broadway artist, told The Post.

In his most popular video, Ludovica reveals some of the downsides of living in an old castle: poor Wi-Fi, cold temperatures – and a lot of cleaning.

“It is a great challenge to manage a castle in Italy. There is no state aid, and there is a lot of property management [to do]”Giuseppe told The Post. “It’s a big commitment.

But a draft doesn’t deter fans from fantasizing about their own “Bridgerton” castle life.

“It amazes me that so many people are interested in something so personal to me,” Ludovica said.

Ludovica started the TikTok account when the coronavirus pandemic forced her to continue her education at the American Musical and Dramatic Academy from her home in Italy. Today, her account has racked up nearly 5 million likes from all over the world, which she found surprising.

“I understand what it’s like to live in such a historic and cultural place,” she said. “But I don’t remember what it was like to move here because I was 4 years old [when her father took over the house from the previous generation]. It was just my house.

Today, she keeps time in Los Angeles to continue classes from her Italian home – and, during the day, she helps advertise the castle for its reopening for tours, overnight stays and events for musical groups. and LARPs (Live Action Role Play).

“I wanted to help the family with our tourist activity since we had to close because of the pandemic. I tried to merge my work in the performing arts with family, ”she said.

The 45-room castle is a square brick fortress with towers at each corner and an open central courtyard.

Behind a green wooden door carved with the family crest, the light pink hall has high ceilings with ornate moldings, decorative tiled floors, and frescoed portraits of the four Knights Guido, Burgundio, Assalito and Raineri de Santo Nazario, who founded the castle under Emperor Frederick I in 1137.

At the top of the main staircase is a window with red, white and gold tiles. Red and gold are the colors of the family, she said.

A hallway filled with velvet furniture and gold framed portraits leads to a ballroom with a ceiling fresco added to the castle in the 1850s by a painter called Grosso, who fell from his ladder and died during the fresco , according to real estate website, who also claims Grosso haunts the castle.

Ludovica likes to perform in the ballroom against the backdrop of richly molded walls, portraits framed in gold. She recently replayed “Once Upon a December” from “Anastasia”, as well as a “Bridgerton” dance.

The main dining room has detailed wallpaper with flowers encrusted in tile-shaped frames. It also has a gas fireplace and an 18th-century Venetian Ca ‘Foscari chandelier.

If that’s not enough, there’s a music room with a painted ceiling, historical clothing on display, glass shelves, and, of course, a piano. A recent video showed Ludovica playing chess on a unique, hand-carved chess board in the music room.

Another cute feature of the house is a plush reading alcove against a clover-shaped window, which she shows off in a video.

The house is filled with original artifacts that haven’t even been discovered. Recently she found old puzzles, a chess set, dominoes, and an 18th century game called “The Wonderful Oracle”.

She helps her father dig through the archives, and they even recently found three invitations for the baptism of Vittorio Emanuele, Prince of Naples.

“It’s interesting to know that you live in a place where you can experience something every day. I like to share what I discover with TikTok, and I cover a lot of things that I didn’t even know about this place, ”she said.

There are also stone passages under the castle, where Ludovica made some scary videos by candlelight. Parts of the underground passages served as a wine cellar, tank storage and even a prison until 1796.

“The family had the management of the local tax, and if someone didn’t pay their tax or commit theft, they would be put in the jail inside the tower,” said Giuseppe, who is the unofficial family historian.

The underground passage is said to be connected to a nearby castle, but they could not find the alleged passages.

“We really have to look for this,” Ludovica told her father during the interview with The Post.

The guest room: Inside the historic rooms for rent

The 18-bedroom, nine-bathroom home is a full-time bed and breakfast with four bedrooms available for rent.

The first is the “flower room” with green floral wallpaper from the 1850s, where Ludovica and Giuseppe video chatted with The Post. The bedroom has a four-poster bed with curtains, a sitting area, a fireplace, antique wooden furniture and a private bathroom, videos show.

There is also a small apartment in the house, which includes a living and dining room, two bedrooms with iron frames, a private bathroom and iron windows. One of the beds has a ghostly mosquito net featured in his TikTok.

The other two two-bedroom suites in the servants’ wing have beautiful arched windows and ceilings, historic-looking bed frames, and possibly a few ghosts, according to videos from Ludovica.

There is the Blue Room, also called the Lace Room, which has blue lace wallpaper, hand-painted ceilings, and a queen size carved wood headboard with heavy curtains, a video shows.

The Pink Room, which has had historical visitors from Ludovica’s TikTok, has two wooden twin bed frames, pink and green wallpaper, and a fireplace.

The park with a church

The garden has a gazebo, an orchard, a stable, a pond and a cooler, according to the site. A recent video shows two dogs play outside near a well.

The castle has its own full-size church with vaulted cathedral ceilings, religious paintings and pews, a video shows. It started out as a family chapel, but for five centuries it was used as the city church before returning to the family when a new church was built in the city. The family had their own priest until 1975, Giuseppe said.

“We were doing? I didn’t know!” Ludovica exclaimed in response during their joint interview.

In the church is a statue of the Virgin of the Rosary, which was brought to the city in a “very dedicated” family ceremony on the first Sunday in October since 1571, according to the site.

“Even with COVID, we still did it,” Ludovica said. “It’s so important.”

Ludovica hopes that the castle can reopen “very soon” so that her fans can come and see the castle in person.

“A lot of people, even in Italy, don’t know that such things exist – families who live in a castle – so we want to promote tourist activity,” she said. “I’ve heard from a lot of subscribers before that they book as soon as they can, that they’ll be there.”