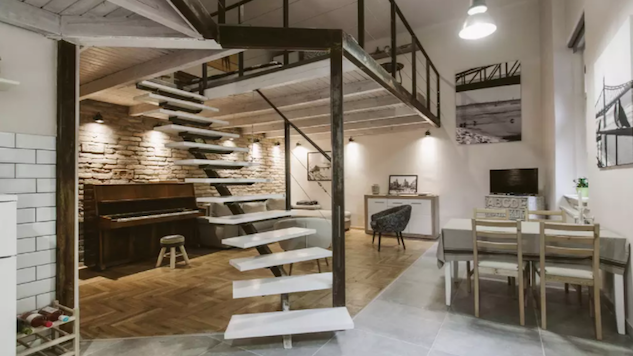 
Budapest, Hungary, is one of the most affordable European capitals. That could change if the city ends up hosting the 2024 Olympics. The city will compete with places like Paris and Los Angeles for top honors, but only if a growing group of anti-Olympics activists don’t get their way. . Whatever happens seven years from now, Budapest is amazing value right now, and entire Airbnb rentals average just $52/night. Here are 10 of our favorites.


Tibor’s apartment may not look super fancy, but it costs an average of $16/night. The centrally located apartment offers a view of the Budapest Eye, Europe’s largest moving Ferris wheel, and is also close to Deák Ferenc Square, St. Stephen’s Basilica and the award-winning restaurant Borkonyha Winekitchen. The place sleeps six with one bedroom and two sofa beds, and there’s also a full kitchen and bathroom with a washing machine.

Located in a building built in 1887 on the bustling Pest side of the Danube, Viktor’s two-bedroom apartment is on the first floor with a balcony facing the street. Parquet floors, decorative tiles in the bathroom, and a mix of modern and antique furnishings give the space an eclectic feel. There are several of the city’s famous “ruin bars” nearby, where you can drink cheap beer in a delightfully abandoned space.

Enjoying a beautiful view of the Budapest Parliament building over the Danube, Noemi’s Riverside Apartment oozes old European grandeur. The spacious third-floor apartment has two beds plus a sleeper sofa and couch, as well as a fully equipped kitchen and updated bathroom. Wi-Fi is included and linens are provided. Public transport is a few meters from the apartment.

Ever wanted a massive bathtub in your bedroom? If you answered yes, Timi and Istvan’s apartment book. Besides the versatile bedroom with a comfortable bed and exposed brick walls, there is a separate bathroom with heated floors, a lounge area with a large TV, an iMac computer to check your emails and a well-equipped kitchenette . Guests also have access to two free bicycles.

Stone beautiful loft apartment overlooks a “secret garden” in the heart of the city. The main floor has an open concept with a dining room, a living room area, a piano and a small but functional kitchen. The queen bed is located in the spacious loft with one of the two bathrooms. The apartment is in a pedestrian area near tourist attractions such as thermal baths, cathedrals and the party area.

Kata and Zoli’s recently renovated”The ladybug” is located in Budapest’s historic fifth district. On a quiet street close to all major attractions, including the neo-Gothic Nagycsarnok Hall, Gellert Baths and the Hungarian National Museum, the first-floor apartment offers a kitchenette with lots of storage space and a modern bathroom.

Called a “princess dream“by Superhosts Dorka and Levi, this apartment has a cute kitchenette, living area, and two beds, one downstairs and one in the cave-like upstairs loft with ” light curtains”. The National Museum is 30 meters away and one of the city’s most famous ruin bars is five minutes from the apartment.

David’s Two Bedroom”D-Mansion“offers space for six with a healthy dose of mid-century modern flair. At under $75/night, the cheery apartment has a good-sized kitchen, dining table for six people and a bakelite stereo to blast Europop before heading to your favorite ruin or if you have children, the apartment is family friendly, with amenities like a crib and high chair provided on request.

For even larger groups, check out Edward’s four bedroom apartment. With vaulted ceilings, huge windows, three bathrooms, and a spacious kitchen and living room, there’s plenty of room to spread out. It’s close to popular sites like the Basilica, Parliament, and Opera, as well as just three minutes from the train station. Past guests say Edward helped them arrange transport to and from the airport, recommended local places to go and he even bought a bubbly one on his birthday.


Susanna’s place is notable for its sheer madness – we don’t even know exactly what’s going on in the bedroom, but it seems to involve a lot of mirrors. Downstairs, the wallpaper appears to be holographic, while some furniture also appears to be reflective. If you can handle the glare, the place also offers a full kitchen, a bathroom with a corner bath, and easy access to the party district and many Budapest attractions.

10 of the best Airbnbs in Boston