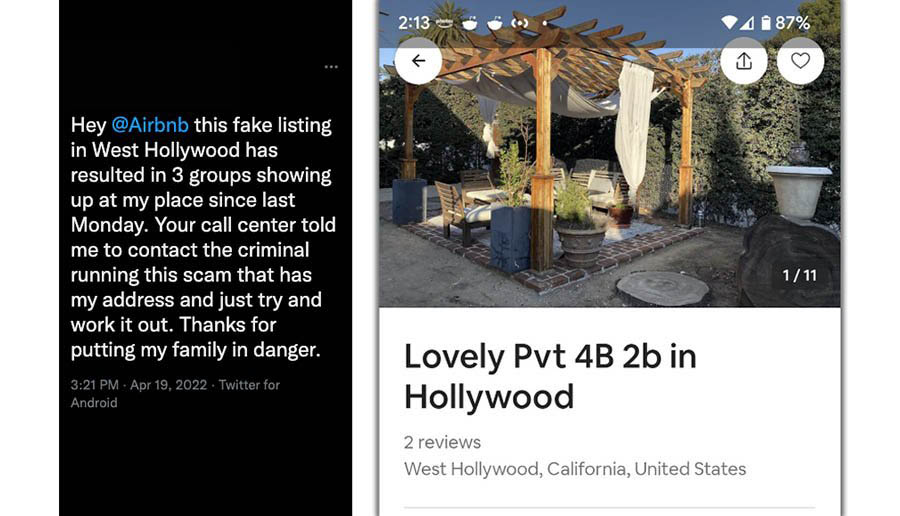 Better Neighbors LA (“BNLA”), a coalition of hosts, tenants, housing activists, hotel workers and community members in Southern California, has exposed a scheme used by hosts Airbnb who use fake West Hollywood listings to illegally rent Park La Brea units in an effort to evade the Los Angeles Home Sharing (“HSO”) ordinance. The BNLA became aware of this issue when it received a complaint from a West Hollywood resident whose address is used in short-term rental (STR) listings for properties that are actually in Los Angeles without his consent.

Park La Brea, a historic apartment complex in Mid-City, is covered by the Los Angeles Rent Stabilization Ordinance; these units are categorically prohibited from being rented as STRs. Better Neighbors Los Angeles discovered one of these Park La Brea units that listed West Hollywood as the location.

After receiving this complaint, BNLA conducted a regional analysis in the West Hollywood border areas between Sycamore Ave and Fairfax Ave. In the border regions, BNLA determined that 69 of 133 listings (52%) misrepresented the location of the advertised property to West Hollywood instead of Los Angeles.

BNLA did an undercover operation and rented a unit. After reserving the unit, the host sent BNLA the true address of the unit. The host also asked BNLA not to tell anyone in the building that the unit had been rented out on a short-term basis.

According to BNLA, the program further decreases the supply of affordable housing in Los Angeles. Last week, the City of Los Angeles released its first homeless count in two years, finding that high rents and limited supply of apartments continue to force Angelenos out of town and many to find themselves homeless. shelter.

The bait and switch system here undermines the HSO by removing affordable housing from the long-term rental market. Furthermore, this tactic also has a negative impact on those whose addresses are suitable without permission to perform the scheme. BNLA spoke with a West Hollywood resident whose address was used without his consent for an Airbnb listing for a property genuinely located in Los Angeles, where the HSO is enforceable.

“For more than six months, at least three groups of Airbnb renters have been showing up in my driveway in West Hollywood every week looking for their rental miles from Hollywood,” said a West Hollywood resident who wishes to remain anonymous. “When these Airbnb customers learn they’ve been mixed up in a bait and switch list, they often become verbally abusive and accuse me of being part of this scam. Every time an Airbnb group is dropped off in my driveway , I get tense. I’ve been verbally abused so many times that I wonder when any of these encounters are going to end in violence.

“It is the job of the Los Angeles Planning Department’s Home Sharing Unit to enforce the Home Sharing Ordinance against fraudulent hosts and platforms. And Airbnb has failed in its responsibility to its customers and to the cities in which it operates to obey the law,” said Tori Funk, representative of Better Neighbors LA. “The usual response from the Planning Department, ‘We don’t know how to enforce the Ordinance’ is simply not good enough. Airbnb’s inability to guarantee the accuracy of their listings is simply not enough. What will it take for one of them to assume their responsibilities? »

“We have removed the listing from our platform,” Airbnb told NBC4’s I-Team regarding the illegal listings, “We have worked closely with city officials to develop a compliance system and will pursue our close collaboration to promote responsible hosting and respond to the small number of hosts who try to circumvent the rules.

A spokesperson for Park La Brea told NBC4 that it does not allow short-term rentals of its units. “We take this issue very seriously and have a robust set of protocols in place to identify and remove any short term listings from our units and are working closely with law enforcement, other property management companies and advocacy groups working to combat this issue.”

In 2018, the West Hollywood City Council voted to ban renters from making money through short-term stays in apartments, making it illegal to list apartments on Airbnb.

Illegal short-term rentals can be reported by email [email protected]