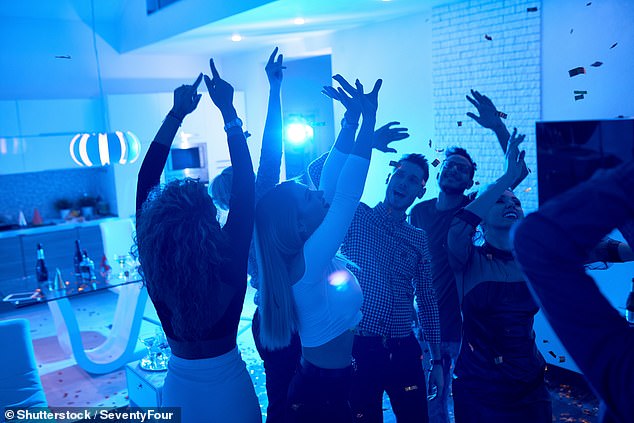 By Sukhmani Sethi for Mailonline

The party is over for Airbnb guests, as hosts in Britain are installing noise monitoring devices that can even alert security guards to break up loud mass gatherings.

A Swedish noise monitoring device that looks like a smoke detector can send audible alerts to hosts and notifications to guests to lower the volume when large gatherings are detected.

If the messages are ignored, security “responders” are dispatched to the Airbnb rental to “solve” the noise issue.

An estimated 4,000 homeowners have installed devices in their properties.

Airbnb has taken a tough ‘anti-party’ stance for New Year celebrations with 11 countries, including the UK, Australia and New Zealand, cracking down to prevent rowdy gatherings

A Swedish noise monitoring device that looks like a smoke detector can send noise alerts to hosts and also has an app that allows hosts to check noise, temperature, risk of mold and “mold detection”. crowd”

Swedish tech company Minut has partnered with Airbnb and is the only “noise monitoring solution” to be fully integrated with the short-term rental app.

Security guards dispatched to properties will give verbal warnings to guests to reduce noise or may disperse them and disrupt the party.

It comes as Airbnb has moved to crack down on house parties ahead of New Year’s Eve in 11 countries, including Australia, New Zealand and Britain.

The online property booking platform will prohibit new users or people without a positive account history from booking an entire home for NYE.

The service will go even further, limiting the same types of customers who try to book two- and three-night stays around NYE.

Hosts can pay £10 a month to set up with Minut’s noise monitoring service, which offers 24-hour property protection.

However, deploying security to Airbnb properties will cost hosts an additional £90 for each call.

So far there have been less than 100 calls to properties.

A Leeds subscriber said Time that the service had made it easier to manage noise issues at his property, as Minut also compiled incident reports and invoices for guests.

“In the case of our last call, we were able to capture the guest deposit without any issues,” he said.

Civil rights organizations are concerned about guest privacy at properties and have described the use of surveillance devices as “creepy” and “extremely intrusive”.

Nils Mattison, CEO and co-founder of Minut, said: “The Minut sensor is designed for privacy. It is cameraless and simply monitors noise, occupancy and temperature levels in the property.

“It does not listen to conversations or capture any other sensitive data.”

Minut also says its service is a response to reports of house parties, inconsiderate neighbors and even illegal activity in short-term rentals that are making headlines.

Other features include motion and tamper detection as well as “occupancy monitoring”, where monitoring devices detect the number of cell phone radio signals in the property.

Airbnb prohibits hosts from taking video or audio recordings of guests at their properties, but Minut devices are allowed because they don’t use cameras and store no data about individuals.