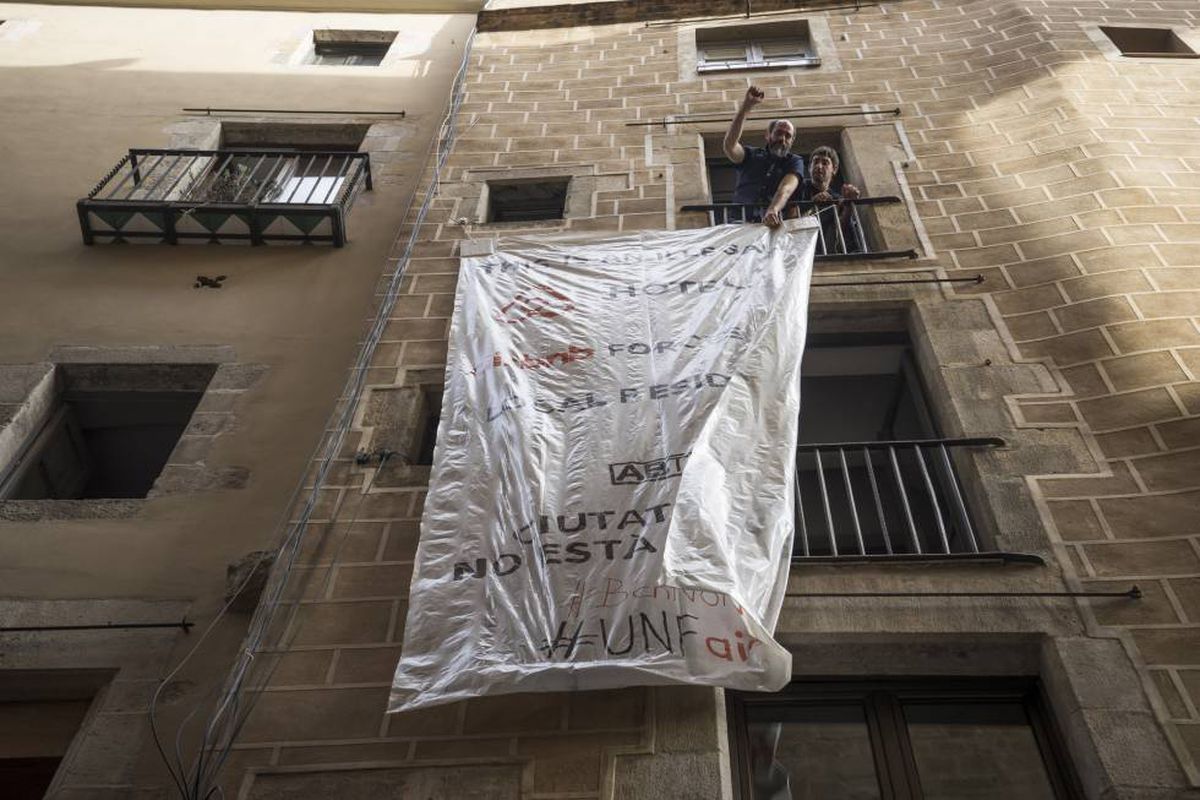 Residents of Barcelona, ​​weary of the huge increase in illegal apartment rentals in the city, through accommodation sites such as Airbnb, on Tuesday found a new way to protest the problem.

As part of an ongoing campaign to protest what they say is a virtual siege of tourists, members of two local militant groups in the Catalan capital have rented a holiday apartment near the city’s cathedral using Airbnb. They collected the keys, entered and then called City Hall to ask them to arrange a property inspection.

In May, locals protested against the docking of huge cruise ships in Barcelona during the peak summer season

City inspectors who showed up for a spot check confirmed that the owner of the apartment – who also advertises four other properties on Airbnb – did not have the necessary documents to rent the apartment.

This landlord would now be banned from renting the apartments, officials said.

A spokesperson for one of the groups involved, the Neighbors Association for Sustainable Tourism (ABTS), Daniel Pardo, said the purpose of Tuesday’s protest was to highlight “the damaging effects of the proliferation of apartments vacation in the city and Airbnb impunity. “

The presence of these apartments in one of the world’s most popular tourist destinations was evicting locals because it drove rents up and turned local communities into theme parks, Pardo said.

The activist pointed to Airbnb’s “complicity” claiming that the company “knows who has a license and who doesn’t but prefers not to make distinctions in order to exploit everyone and make money. money for big landowners “.

The online hosting portal “champions the sharing economy but is actually speculative,” Pardo said. Any owner found to be using the site illegally should be banned, he concluded.

About 40% of Barcelona’s 16,000 holiday apartments are rented illegally by sites like Airbnb, according to figures from the city hall.

In July, Barcelona city hall decided to tackle the problem by introducing an amount of 1.3 million euros package of measures to crack down on landlords who rent apartments using unlicensed sites like Airbnb. Authorities set up a website and called on residents to report illegally rented apartments. By mid-August, around 500 complaints had been filed.

But Airbnb defended itself by claiming that EU law does not require hosting sites to systematically monitor illegal activity on the part of owners. Rather, the responsibility lies with the local authorities.

The managing director of the company in Spain, Arnau Muñoz, said: “What Airbnb is asking for is the regulation of ‘home sharing’, a temporary arrangement, different from people who live by renting holiday accommodation. . Shared accommodation leads to responsible and professional tourism which is part of a city. “

More than 70% of hosts using Airbnb in Barcelona advertise only one property, Muñoz added.

City inspectors said on Tuesday the owner of the holiday apartment near Barcelona Cathedral would receive a notice banning further operations at the site.

They added that a notice could be issued when it was clear that an apartment was rented for more than 31 days per year with proof that a financial transaction had taken place. But officials also stressed that their job was not easy, saying that often intercoms in apartment buildings either did not work or were improperly marked. The owners also refused to simply open the door for them, which had already happened on Tuesday morning, they said.

Barcelona – the fifth most popular Airbnb destination in the world – receives nearly 9 million visitors a year and tensions have been high in recent years with complaints that low-cost tourism makes life in the city unbearable.

In 2014, there was spontaneous protests in the popular district of Barceloneta against “drunk tourism” while protesters also took to the streets in May to complain the mooring of large cruise ships in the city’s port, highlighting the inconvenience of the 2.6 million tourists who flock to the city during the summer season.