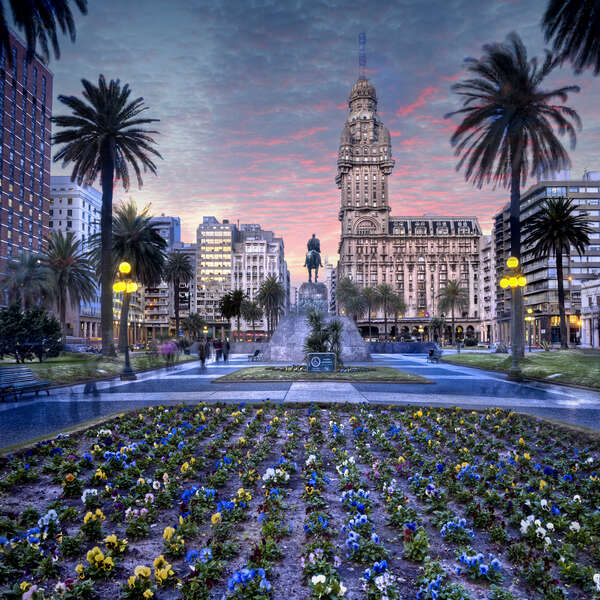 Best things to do in Montevideo, Uruguay

If it seems like everyone you know has just returned from Lisbon and you’re looking for an enchanting, frozen-in-time port city where cafes are not Buzzing with complaints about Manhattan rents, we have one word for you: Montevideo.

Uruguay’s capital was one of Anthony Bourdain’s favorite destinations, but few Americans know its selling points: block after block of Belle Epoque grandeur and Art Deco charm, beaches on which you can can practically roll out of bed, laid-back vibe that existed before weed even became legal, super-affordable steakhouses and tango bars to match its more high-profile neighbor Buenos Aires. And – seriously – an almost total lack of tourists. Even during its month-long carnival season.

Uruguayans like to joke that everything comes here 30 years late, but the locals are a modest and unassuming bunch. What they’ll tell you only after a few glasses of delicious homemade Tannat wine is that their country ranks well above the United States in The Economist’s annual democracy index; has long led Latin America to guarantee gender, sexuality and labor rights; and, yes, was the first country in the world to completely legalize cannabis (only for residents, alas, although there is talk of passing the faso in Yanquis soon).

Italian and Spanish immigrants flocked to this progressive country in the 19th century, which is why you’ll find classic pizzerias like Tasende Bar and Bar Las Flores. The 1970s and 1980s were a little rough, but things are looking up again. A prison that once housed political enemies is now the shining Shopping in Punta Carretas mall (one of the few places where international chains like H&M and Zara have encroached), and one of the leftists imprisoned there, José Mujica, became the country’s beloved VW Bug-driver president, affectionately nicknamed “Pepe”.

Here’s where to find those craft beers, grilled meats, best beaches, and laid-back vibes in Montevideo.

Walk on the rambla

Montevideo is a city known to be secular, but it has a religion: relaxation. The people here are so devoted to keeping it calm that there’s a Rolling Stones cover band called Los folding chairs. On any given day, you will find most of these deckchairs parked at the rambla, the nearly 22 km promenade along the Rio de la Plata, the ocean-like river that separates Uruguay and Argentina. (If things get also chill, Buenos Aires is only a few hours away ferry.)

As the sun sets, locals flock to their favorite grassy knoll or sandy beach along the river to partake in the national drug of choice: yerba mate. Give it a few days and you’ll also walk around with a thermos under your armpit and a gourd full of hand-ground tea leaves.

The rambla really appears at the end of the summer, during the carnival season. From around late January to early March, the Teatro de Verano amphitheater hosts a series of nightly revues in which singers and dancers with flamboyant garlands stick to The Man. Do do not miss the Llamadas Parade, when traditional candombe musicians take over Isla de Flores Street and rock everyone’s butt until the early hours. During low season, on Sundays, you can hear their furious drumming in the old Afro-Uruguayan neighborhood of Barrio Sur.

Of course, all the beaches in Montevideo face the sometimes murky Río de la Plata rather than the ocean. But put on some beer glasses at Playa Pocitos’ little outdoor bar and it’ll start to look like the poor man’s Pacific. In Playa Malvin there is beach volleyball and kitesurfing. And Playa Martinez offers a touch of Coney Island, thanks to the mini amusement park across the street in charming Parque Rodó.

…or by the ocean

But if you think a beach without waves is like a steak without chimichurri sauce, you’ll want to do as the Argentinians do every summer and head to the Uruguayan resort town of Punta del Este, a few hours from the city. When Punta starts to look a little too much like JG Ballard High Risedrift further west along the Atlantic coast to the quieter seaside town of Jose Ignacio.

Although it’s known as the Hamptons of Uruguay (I bet you wouldn’t expect to spend $9 on a cafe in South America), you can still find affordable Airbnbs in converted shipping containers, and the beach bars known as chiringuitos serve cheap and potent caipirinhas. Book a seat at James Turrell Ta Khut Sky Space– one of the Kanye-approved light artist’s trippy sky viewing chambers – for a deeply unforgettable sunset. And if you want to be free and without clothes, Playa Chihuahua is the only completely nudist beach in Uruguay. Ay Chihuahua, indeed.

Un aplauso para el asador (“Applause for the Grill Master”) is as close as Uruguay comes to “In God We Trust.” To see several sausage throwers at work under a very impressive 1860s steel beam roof, take a stroll through the Mercado del Puertothen head to the bar at the local favorite Cabana Veronica to watch the flank steaks and sweetbreads sizzle on the embers of the firewood.

After a day spent exploring the public park in the quiet Prado district, the Japanese gardens and the charming Blanes Art Museumgrab a picnic table in the centennial courtyard Los Yuyos tavern to sample a range of house-infused cane liqueurs. Order it sweet morcilla and decide whether you love or hate the sweet pudding with nuts and raisins.

At this point, we are contractually obliged to mention Chivito, the Uruguayan meat pile of a national sandwich. The most famous and messy version is found half a century ago Bar Arocenain the affluent neighborhood of Carrasco.

But why stick to the classics when innovative mixes are happening all over town? So many people flock to From Morondaga tapas bar for ridiculously fresh siri crab, caught off Rocha, that it has opened a sister location across the street. Lively brunch spot Sometimes on Sunday serves succulent pulled pork sandwiches to those suffering from Milanese fatigue.

Wine Experience in Montevideo isn’t just the place to sample Uruguay’s unsung reds and whites, it’s also where you can enjoy a well-crafted Manhattan or martini in a city slavishly devoted to negronis and gin tonics. Ask nicely and Es Mercatthe Catalan spot across the street, might just walk their fantastic chipirones (grilled calamari) to your sidewalk wine barrel. Montevideo is exactly that kind of place.

Sleep near the beach or in a haunted monument

Montevideo still doesn’t have many boutique hotels, but Hilton recently opened SORO is conveniently located steps from Pocitos Beach, right on the border of the Pocitos and Punta Carretas high rise neighborhoods.

If you’re looking for a less conventional stay, you’ll find it overlooking the main square, Plaza Independencia. Although the Palacio Salvo and its twin brother in Buenos Aires, the Dante-themed Palacio Barolo, are no longer the tallest buildings in Latin America, they are still among the most iconic and mark an Airbnb at the Salvo will earn you major bohemian credibility.

In addition, it is a stone’s throw from the cultural facilities of the historic district of Ciudad Vieja. These include the 1850s Solis Theater, a lavishly restored landmark hosting operas, theater and musical performances; the Uruguayan Cinemathequea demanding art cinema with an on-site bookshop and café; Back Puro, a Belle Epoque bookshop and a vegan café on the pedestrian promenade of Sarandí; and Baar funa tango bar where the great Carlos Gardel would have returned clichés of the house uvita wine liquor.

A word of warning: some believe the Salvo is haunted by one of the brothers who built it, but it is said to be helpful and friendly. In this town, even the ghosts are cold.

Daniel Maurer is a contributor for Thrillist.