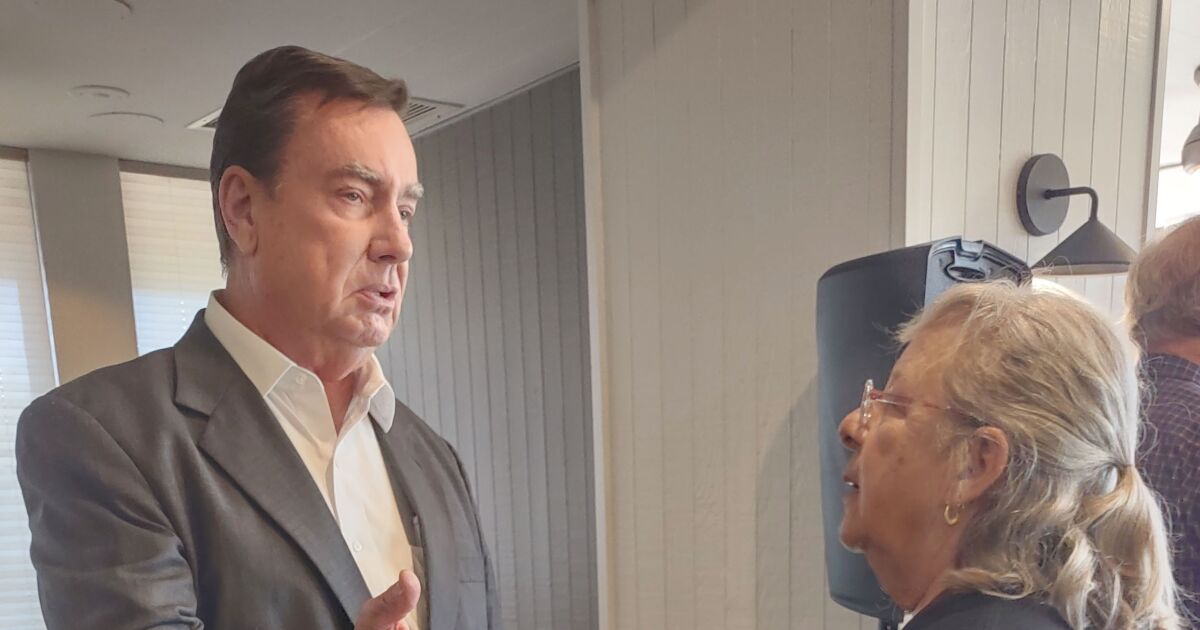 In addition to addressing concerns about proposed traffic calming measures in the estates and delays to Route 67 improvements, Anderson spent nearly two hours answering questions related to Airbnb, the consumption of drugs, trash cleanup on Mount Woodson, and more.

“I love my job and feel privileged to serve you,” Anderson told a large audience at the Oaks Grille at the San Vicente Resort. “I believe it’s my job to make the government work for you.”

Early in the meeting, Estates residents voiced their opposition to a proposal to close a median on San Vicente Road to prevent left turns on Arena Drive. An audience member said he was told that turning left at this intersection violated road safety laws.

Ramona resident Joe Cahak said county staff are weighing concerns about Arena Drive residents encountering traffic as they pull out of their driveways. But restricting left turns on Arena would force drivers to descend onto Gunn Stage Road and create traffic impacts at that intersection, Cahak said.

Anderson said the best approach to addressing repairs on local streets is to work with the Ramona Community Planning Group’s transportation/trails subcommittee first, followed by the planning group. The county will make decisions about roadway changes based on recommendations from the planning group, he said.

“I’m not going to make the decision for you,” said the county’s District 2 supervisor who represents cities and communities in East County, including Ramona. “I represent the majority and what they say.”

Several residents spoke of the delays in widening SR-67 to two lanes in each direction. One said “government agencies have failed to do the people’s job” since road improvements to SR-67 were promised in the 1987 tax vote bill, Proposition A. , which levied a half-percent sales tax for regional transportation improvements.

Dan Summers, a member of the Ramona Community Planning Group, told the meeting that the Ramona State Roads Subcommittee has been working with Caltrans and the San Diego Association of Governments (SANDAG) for four years to attempting to widen the SR-67 for security and evacuation purposes.

This resulted in a Comprehensive Multimodal Corridor Plan (CMCP) that promises hiking and equestrian trails, wildlife crossings, electric vehicle charging stations and bike paths along the SR-67 corridor, but does not does not include wider lanes, Summers said. Summers, who chairs the RSRS subcommittee, said he has received support from state and local officials for the widened highway. Among them are Anderson, State Senator Brian Jones, Assemblyman Randy Voepel and Congresswoman Marie Waldron, the Ramona Unified School District and the Ramona Chamber of Commerce whose letters of support are sent to Caltrans and SANDAG, Summers said.

In a separate topic, a Holly Oaks resident asked Anderson for help in regulating Airbnb short-term rental properties locally. The resident said she was “afraid” of bringing people to Ramona who may not share the values ​​of the community, such as gang members. Another woman added that her neighbor rents an Airbnb where guests are loud and stay for brief periods.

Anderson said he and his staff would review Airbnb’s policies and perhaps help correct an error in local regulations. The rules allow people to party until 11 p.m. and after that, nuisance noise can be reported to the Ramona Sheriff’s Department substation, Anderson said. Disruptive guests can also be reported to Airbnb, he added.

“Airbnb’s rules should apply to all unincorporated areas,” Anderson said. “You’d have to get the majority of people to agree with you, so it’s not that simple.”

Drug use and overdose prevention were discussed at the meeting after a woman said her son died of a fentanyl overdose in 2020.

Anderson said fentanyl use has increased sharply since 2020, especially in rural areas. Anderson supports a peer program where a friend or relative of an overdose victim can be by their side in the hospital as the patient recovers. Statistically, victims would likely die from an overdose without emotional support soon after a seizure, he said.

“It’s everywhere, we have the same problem in prisons,” said Anderson, who said the wraps can be mixed with fentanyl and reconstituted with water to be consumed by the recipient later. “I hope that by the end of the year we can implement some measures to protect our children and our neighbors.”

Anderson said he led the way by setting aside $2.8 million in the county’s 2020-21 fiscal year budget to shut down illegal cannabis dispensaries, or “pot shops.” Anderson credited county supervisor Nathan Fletcher’s cooperation with voting in favor of some of his initiatives, which included closing illegal pot shops and increasing funding for fire prevention and firefighting planes. .

“My colleagues ran for office because they care about their communities,” Anderson said. “We all want the same things, and we can make it clear to them that it’s in their interest to help us.”

Among other matters, a Ramona resident asked for Anderson’s help in organizing a community-wide cleanup to pick up trash that had accumulated on the Mount Woodson hiking trail. Another woman asked for her help finding transportation for her son who uses a wheelchair and needs to be taken to an adult day program.

Anderson promised to help with both.

“Ultimately the county makes the decisions, but we can present the case,” he said.

Iowa is one of the safest states in America in 2022