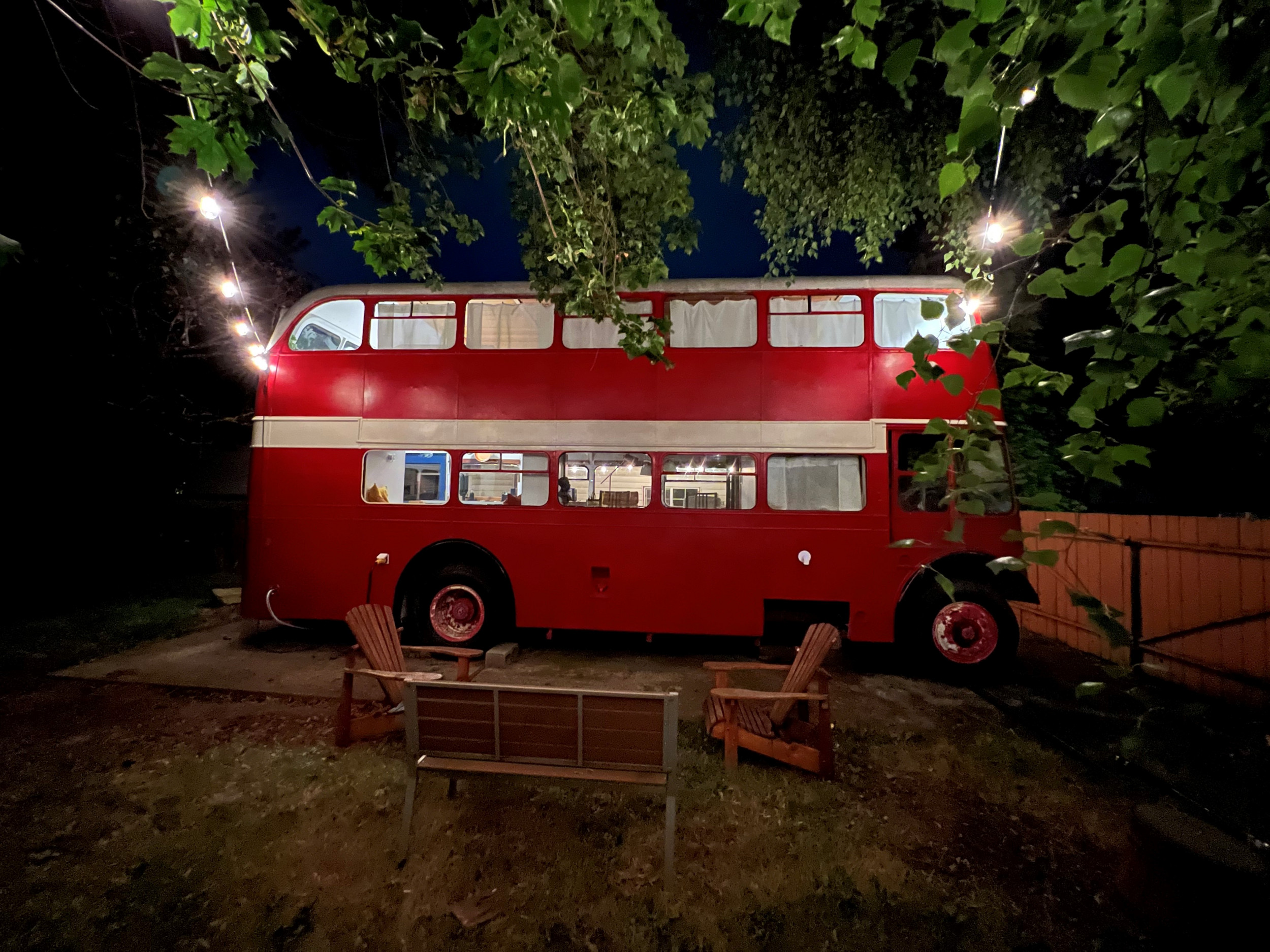 I had been interested for years in the construction and renovation of tiny houses. I grew up in Claremont, a town on the outskirts of Los Angeles, California, and my dad taught as an elementary school teacher and hobby carpenter, so he taught me carpentry. I often helped build theater sets in middle school, high school, and college. Then, after college, I worked in video production for 10 years, but I got exhausted from constantly sitting behind a desk.

In 2012 I moved to Portland, Oregon because it was more spacious than where I lived and because the mother of my children and her family lived there. In 2016, I met a friend called Cody, who helped me remodel my in-store garage. Cody had an engineering degree, which helped me feel confident in my carpentry work. Once we started, I realized that building and renovating tiny houses, vans, and sheds was more fun than anything I had done before.

As we were working on my garage that year, we started talking about other projects. We were interested in the idea of ​​building a treehouse to rent out as an Airbnb property, but we didn’t have the actual property to build it on. So we decided to build a small house on wheels. We both pulled out credit cards and said one of us would buy the trailer, and the other would buy the lumber. The little house took a year to build and when it was finished we parked it in my backyard in Portland. I then built another small house in 2018.

I didn’t know what I was going to do next. Luckily I had a friend who was a general contractor and he asked if I could help with the demolition. While helping out my friend in 2019, I had an Airbnb guest stay in the tiny house in my backyard. Her name was Amber and she came with her daughter. I was divorced with two kids and we all hit it off to hang out that weekend, which happened to be my daughter’s fourth birthday weekend.

Amber and I started talking via FaceTime, and then she came back for a visit to Portland, and after that, I went to visit her in Austin. After these first two visits, I began to regularly go back and forth between Portland and Austin. Finally, we got married on New Year’s Eve 2021.

Things have changed during the pandemic. I couldn’t fly to see Amber, so I bought a van, transformed it, and drove it to Austin. While I was transforming the van, I posted it on Instagram and a friend of mine asked if I could help him convert two vans into tiny homes. During the pandemic, the van and bus trade took off because people weren’t allowed to fly, so it seemed like everyone wanted to be on the road.

In October 2021 I was looking for more vans to convert and sell, and I came across a double decker bus from the UK where they call them “double decker buses” and I immediately knew I had one needed. I like to work on original projects. In college, I wanted to own a bus like this. I played ultimate frisbee and remember looking around for buses that I could get for my frisbee team, so we could drive around. To me, these British “double-decker” buses are cool and nostalgic. So I contacted the owner, who lived in Vancouver. He told me I would love it, and even though it had low ceilings, I could renovate them. Before seeing the bus, I paid $1,000 upfront.

I didn’t know where I was going to place the bus and how I was going to work on it, as it was my first independent project, but I had pulled the wires and let it happen as it happened, rather than to worry about the future. Weeks later I met a friend called Ian who allowed me to move my little houses to his property, on a river right next to his sauna and bathhouse in Redwood Forest. The place was beautiful and it was much better than my garden.

The plan was for the bus to be a small rental house for guests in my backyard. It was a lot of things before that, including a well-known food cart in Portland called “The Grilled Cheese Grill” for a few years. Prior to this, the bus was in operation as early as 1953, in Huddersfield in Yorkshire, England.

I knew I had to work on the ceiling, because upstairs it was very low. So, I took the floor out of the hallway and turned it into a kitchen, then I took the floor out the front of the bus and turned it into a bathroom. This gave me the option of having a higher ceiling height upstairs. The cool thing is that with this I was able to fit a full sized double bed which makes room for a bathroom downstairs. In total, the bus cost $8,000 and the renovations cost $12,000. I didn’t get paid to do it either.

As I was building the bus in the driveway, people were stopping because I kept the “The Grilled Cheese Grill” sign on the bus. Often I was asked if I was reopening “The Grilled Cheese Grill”, and I explained that I was turning the bus into a little house for rent. People thought it was amazing. At one point the bus was getting cat calls and honking because it looked monumental.

I got married in January 2022 and finished the bus renovations in August 2022. The first few weeks of renting the bus were amazing. We only had three days available per month. I charge $79-$149 a night depending on demand, but I’ve already made about $2,700 renting it, in a month, and it’s already 80% booked for the next few months.

I clean the bus on the days when people are leaving and I am in contact with everyone who is staying there. People love that. A mother brought her two children and she made them a fancy grilled cheese sandwich, in memory of “The Grilled Cheese Grill”.

Renovating the bus was exciting for me. I was able to make decisions on my own, but having my family involved in the process was also good. My young daughter was helping me move things, which made me realize that she was going to be really interested in doing things. Being creative and watching it all fall into place was a really fun process.

Whitney Royal Scott rents her double-decker bus, The Royal Scott, on Airbnb. You can also follow him on Instagram @smore.life

As told to Carine Harb.