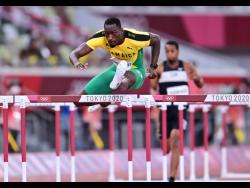 In a preview of the upcoming National Trials, top hurdlers Hansle Parchment and Omar McLeod will face off, headlining a strong Jamaican field in today’s Diamond League encounter at Alexander Stadium from Birmingham, England.

The encounter will see both athletes make their Diamond League debut in the 110m hurdles at 9.41am. Parchment, the Olympic champion from Tokyo, has won three races this season and clocked a season-best 13.15 seconds which he established at the Puerto Rico International Classic. May 12. McLeod, the 2016 Olympic champion and 2017 world champion, competed in the Penn Relays in April where he finished second in 13.22. Parchment and McLeod have the third and fifth fastest times in the world this season.

Ahead of their clash, Parchment says he hopes the depth of homegrown talent will be in good shape to make the podium at the World Championships in Athletics a reality, a dream McLeod also shares.

“We always talked about getting a double at the World Championships. So I really hope the other guys are in good shape this year and we can expect to bring all the medals back to Jamaica,” Parchment said at yesterday’s pre-race press conference.

Parchment says he’s aiming for a fast time at the renovated facility which he says will be his last meeting before the senior nationals in late June.

“I think I’m in good shape. I still have a lot of work to do, but I’m looking forward to running a really good race and hope to have a really good time on this beautiful track,” Parchment said. “After this one we’ll close it down and focus on testing. Of course you know we’ve got quite a few good guys in the hurdles. So I have to make sure I’m ready to give my best. myself in the tests.

Tokyo Olympics 100m bronze medalist Shericka Jackson will compete in her first Diamond League 100m race against reigning 200m world champion Dina Asher-Smith and bronze medalist in the Olympic 200m Gabby Thomas of the United States, at 8:46 a.m. Thomas beat Jackson in the 200m in the season opener in Doha last week, where Jackson opened his 200m campaign. This will be Jackson’s first 100m race outside of Jamaica, after competing in the Jubilee Series on May 7. Two-time Olympic sprint champion Elaine Thompson Herah, who was originally scheduled to compete, withdrew from the event as a precaution, citing discomfort she felt in training. .

Meanwhile, Olympic bronze medalist in the 4x400m relay Janieve Russell and Ronda Whyte will compete in the women’s 400m hurdles at 8:04 am. The two will face multiple world and Olympic champion Dalilah Muhammad of the United States, who will compete in her second 400m hurdles of the season.

Olympic finalist Natoya Goule will compete in the women’s 800m where she will face rising British star Keely Hodgkinson, who has a personal best of one minute 55.88 seconds for the two-lap race. Ghoul’s lifetime record is 1:56.15.

Schedule of Jamaican Athletes at the Birmingham Diamond League