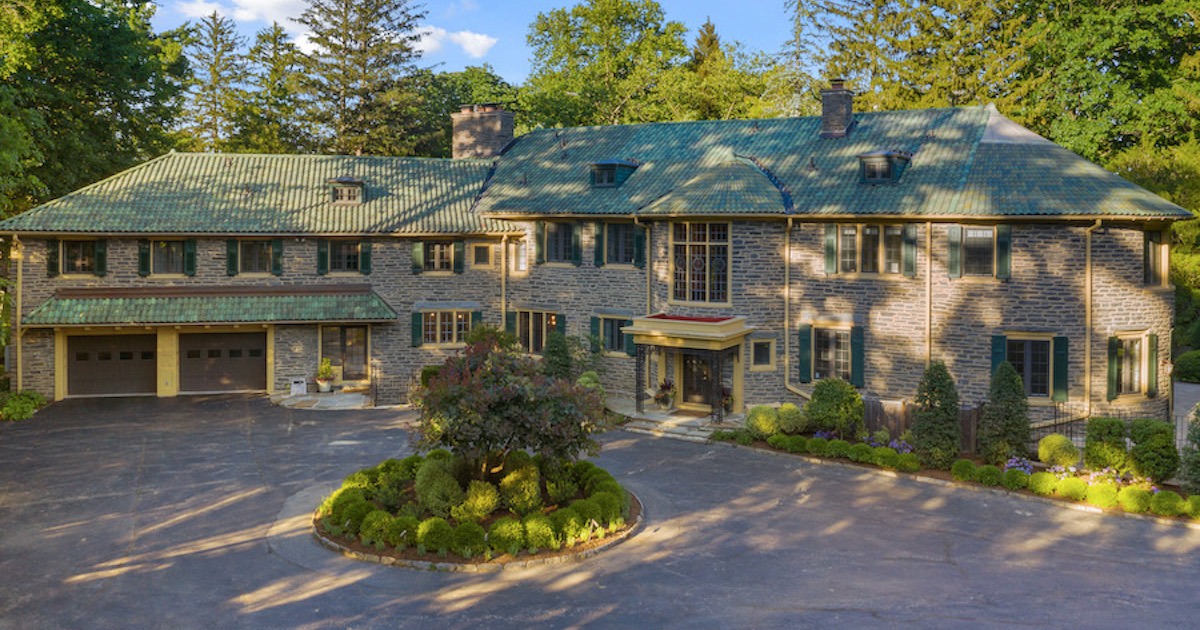 This house has only changed hands twice since it was built in 1925, but it has plenty of stories attached to it. You can now write its next chapter.

Sign up for our weekly home and property newsletter, featuring homes for sale, neighborhood events, and more.

This vast Tuscan villa remained in the hands of the family who built it for three generations before becoming a convent in 1977. Its current owners bought it in 2001 and converted it back into the gracious private residence that you see here at 227 N. Bowman Ave., Merion Station, PA 19066 | Photos: Paul McGlade via + Realtors, Compass, unless otherwise noted 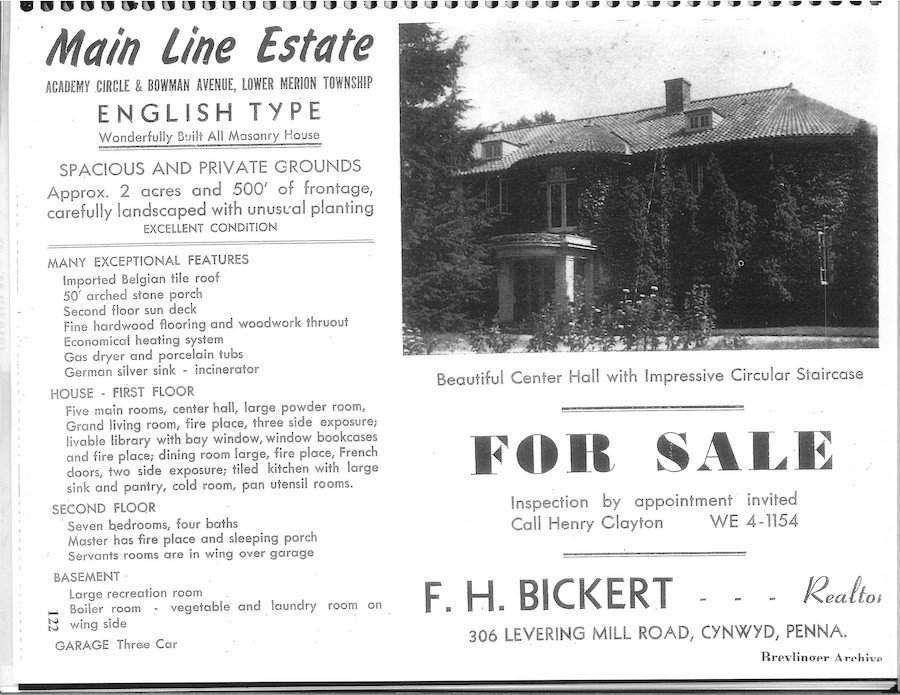 This ad for sale is one of the many historical objects that the owners obtained from the archives of the family who owned it before selling it to the Sisters of the Assumption. Its date is not known, but its typography – and the absence of a postcode in the address – strongly suggests the early 1960s at the latest. | Breylinger Family Archives via + Realtors

If they wanted, + Realtors brokers Paul and Lauren Lipowicz could run this ad for sale that likely appeared in the early 1960s for this Merion Station Italian house for sale with only minor alterations as this house has the same shape and the same basic features now as it had back then. 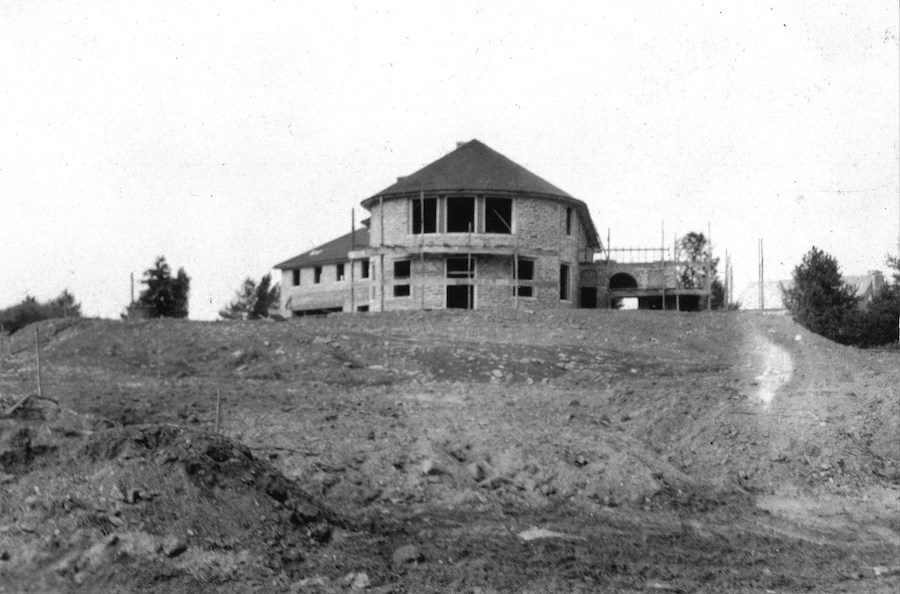 Photo of the house under construction in 1925. The ballroom / living room is below and the porch / master bedroom is above. | Photo: Breylinger family property collection via + Realtors

The journey began in 1925, when Father Donald Folwell, the son of a prominent Philadelphia textile merchant, built this house on a circle at Merion Station. His family of eight had grown too large for their Spring Garden Street home in the city, and Folwell also wanted to care for his aging widowed father, Nathan T. Folwell, founder of the family business, Folwell Bro. & Co., where Donald also worked.

As a result, the house had seven bedrooms to accommodate his own clan and a wing devoted to Nathan’s care above his three-car garage. Nathan had his own bedroom, his nanny had a smaller one, and his driver and wife lived in a secondary apartment. (Nathan would marry his nurse in 1927 and move to the family’s summer home in Strafford.)

The house was a distinctive and particularly welcoming structure from the start. I have no idea what led this agent to refer to this mansion as “English type”, as its appearance is clearly more Italian than English, from its Tuscan roof of green Belgian tiles to down. 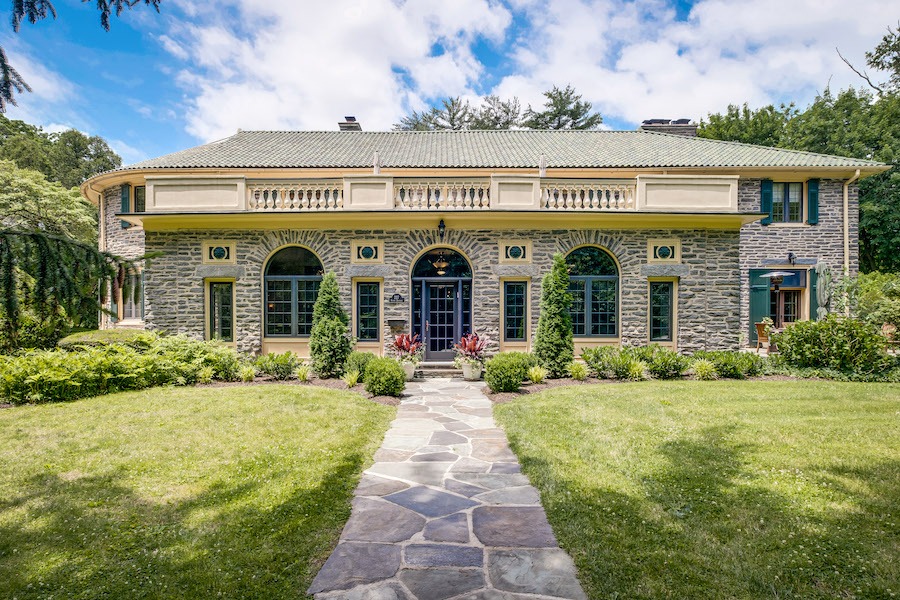 The photo at the top of this article shows you the engine entrance, which is how most guests would enter today. Those who walk there – it’s a hike from the Merion Regional Rail Station, but the Route 44 bus drops you off very close to Montgomery Avenue – would see this dignified frontage at the end of the path from the street. 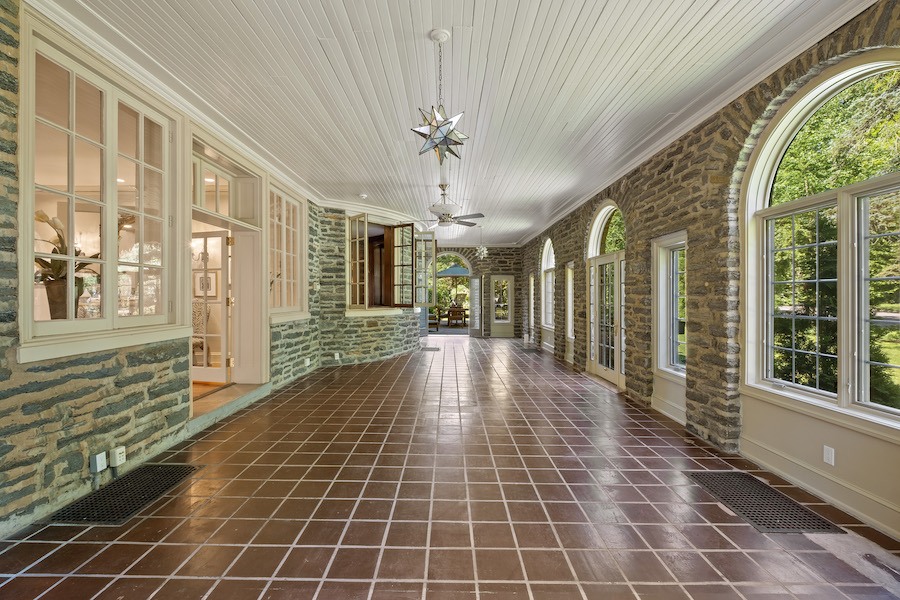 Behind its main door is a veranda which spans almost the entire width of the ground floor and connects its living room and dining room. 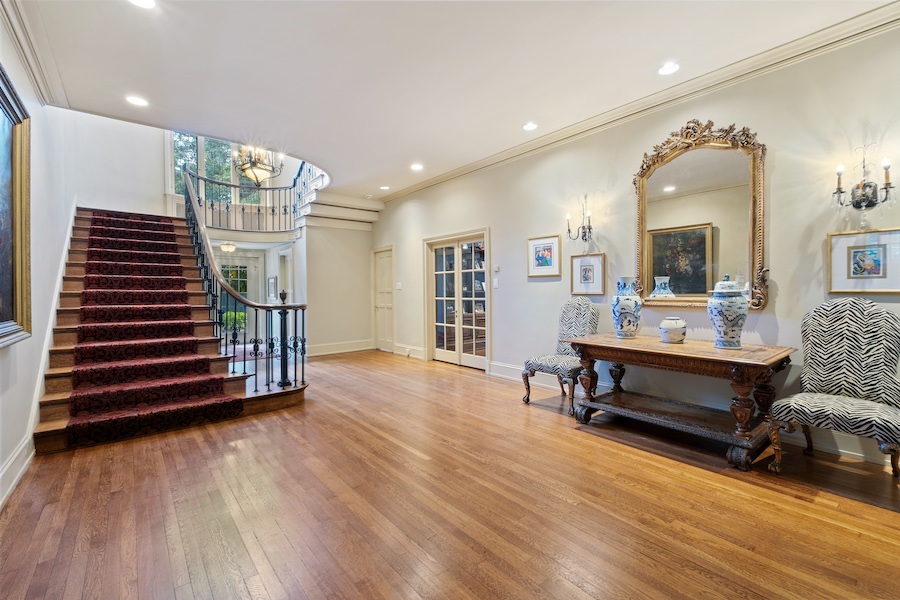 Beyond is a spacious hall with a curved staircase and a large stained glass window above the engine entrance. 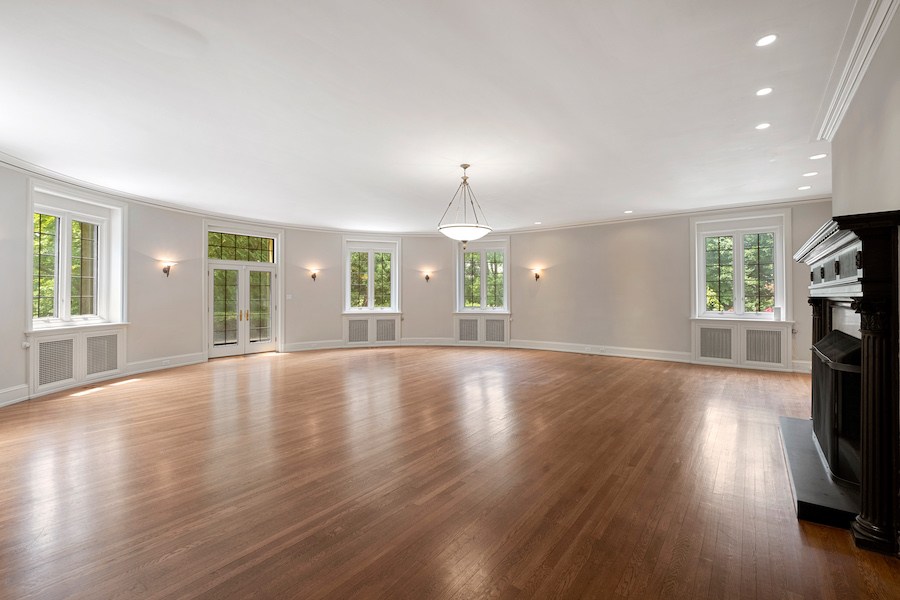 To the right of the foyer from the engine entrance is a living room large enough to be a ballroom. Although the owners of this house have a lot of historical records about this house, there is no indication whether the Folwells or the two generations of descendants who lived in this house until 1977 made any entertainment on a large scale. They could have invited notable neighbors if they had: Dr Albert Barnes lived just down Bowman Avenue, and for some time during World War II the von Trapp family from Sound of music the celebrity lived in the neighborhood. 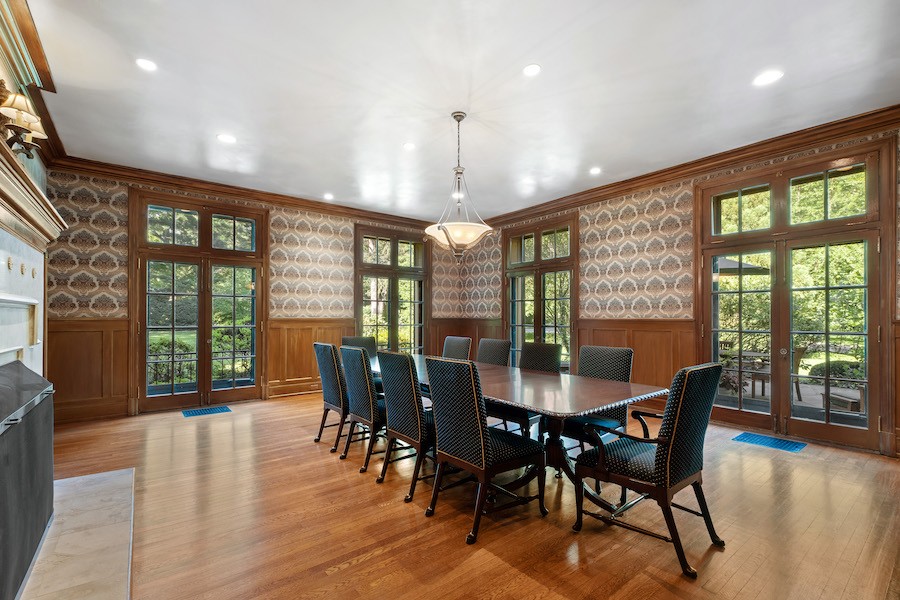 Today, this Italian style house for sale in Merion Station is even better equipped to entertain a crowd. In addition to the living room and veranda, it has a large formal dining room with a fireplace, space for a large dining table and patio doors that open onto the terraces which surround. 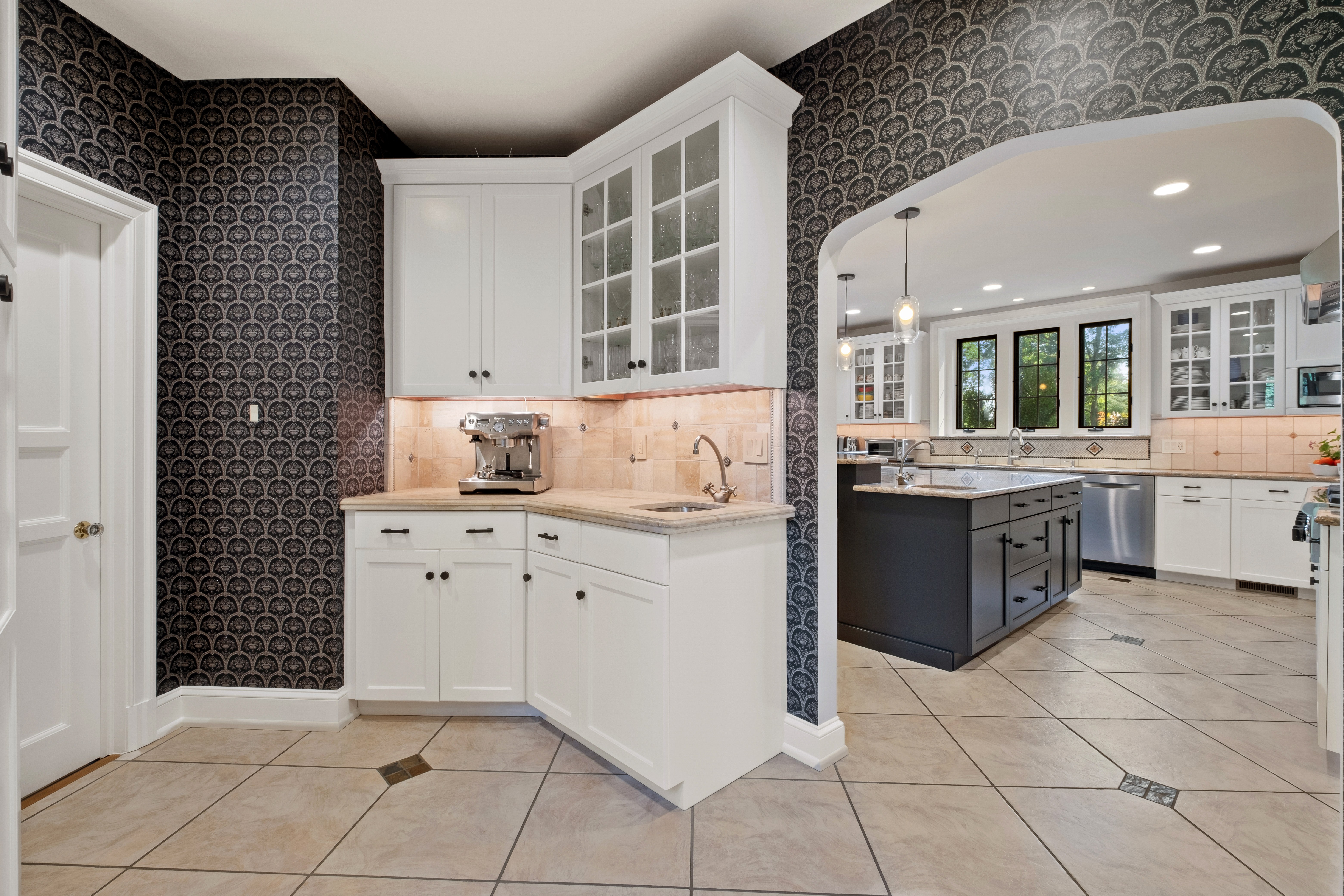 Doors flank this fireplace. The one on his right leads to a spacious pantry. After Nathan Folwell passed away, the servants living upstairs could use a staircase leading up to this room to reach him and the kitchen. 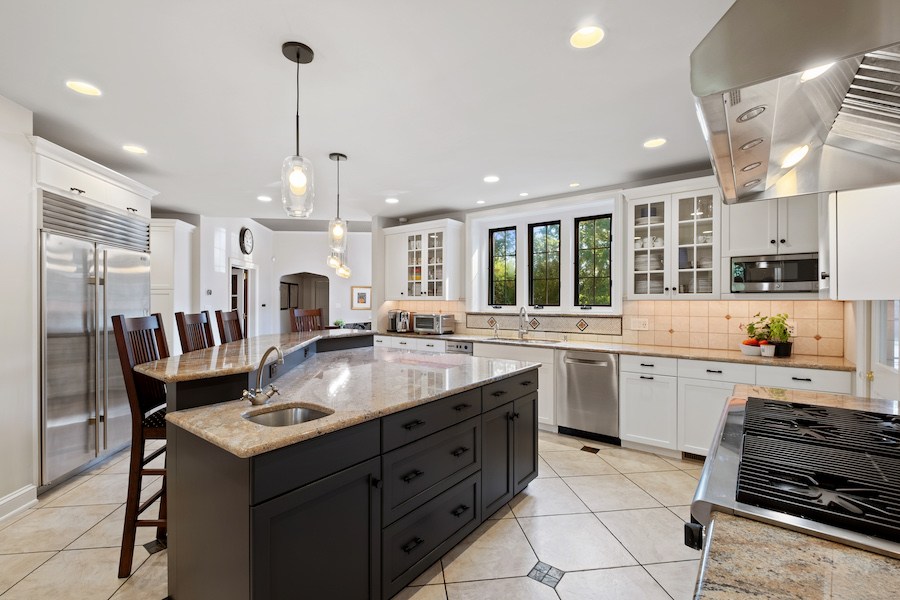 The door to the left of the fireplace leads into the kitchen. This professional grade installation took place in 2001 when the current owners purchased it from its previous owner and hired Gardner / Fox Associates to make it a single family residence. (More on this owner in a moment.)

In addition to a gas cooktop with six burners and more a grill, a double wall oven, a restaurant-quality hood, a microwave oven, three dishwashers, two sinks and a trash compactor, it has a bar for four on its island and an adjoining breakfast room. with bench seating for eight people. The two spaces put together are perfect for family dining and casual entertaining, and the kitchen is clearly equipped to whip up a feast for a horde – or maybe even a wedding. (Two of them took place here, as you will soon learn.) 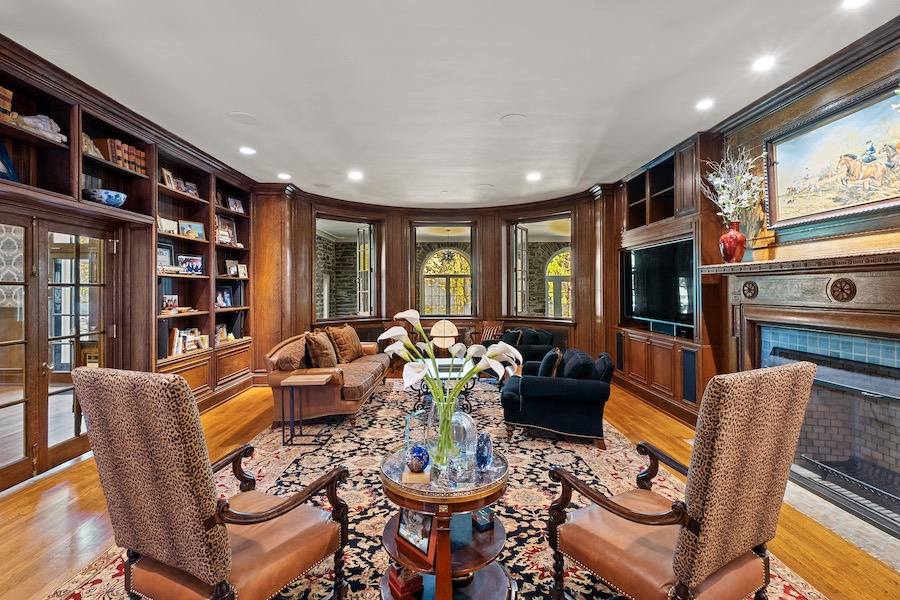 Separating the dining room from the foyer, a library / family room can also accommodate a more intimate reception. 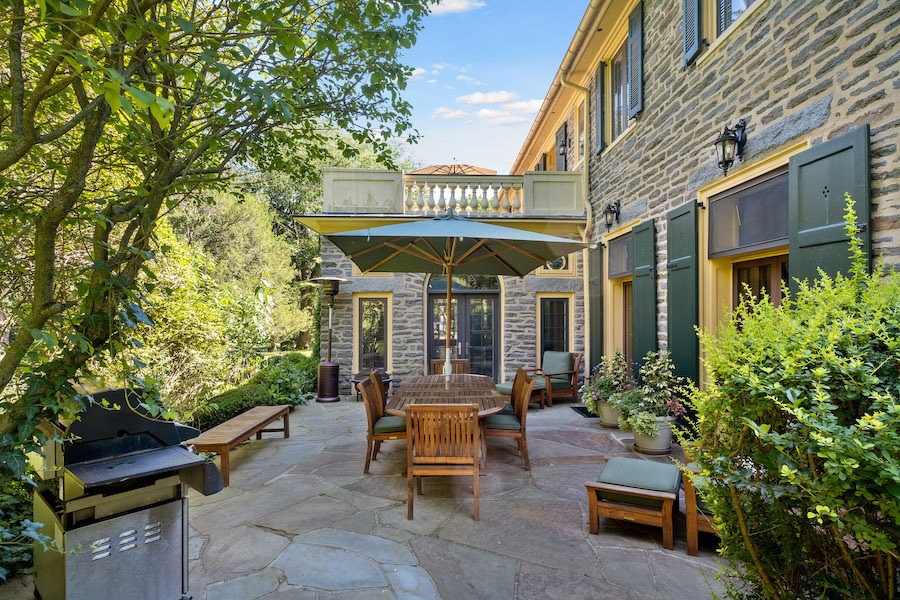 And outdoor decks frame the lanai for outdoor relaxation and entertaining. Another terrace surrounds the living room.

There are fewer bedrooms upstairs than there were when the house was built or under the previous owner. This owner, the Sisters of the Assumption, bought the house from the Folwell descendants in 1977 and transformed it into an 18-room convent and an infirmary. Barbara (Beard) Hyde Ballard, the third generation of Folwell descendants to live in the house, was the daughter of Mary Kemble Folwell, one of four daughters and two sons of Donald Folwell. Mary married Hyde W. Ballard in this house in 1933. Barbe would follow in her mother’s footsteps, marrying Breylinger in the house in 1955. (Obviously, Folwell had good reason to include this huge living room.) The house is remained in the family after the death of Donald’s widow in 1966; the above ad may have represented a first attempt to sell after this event. 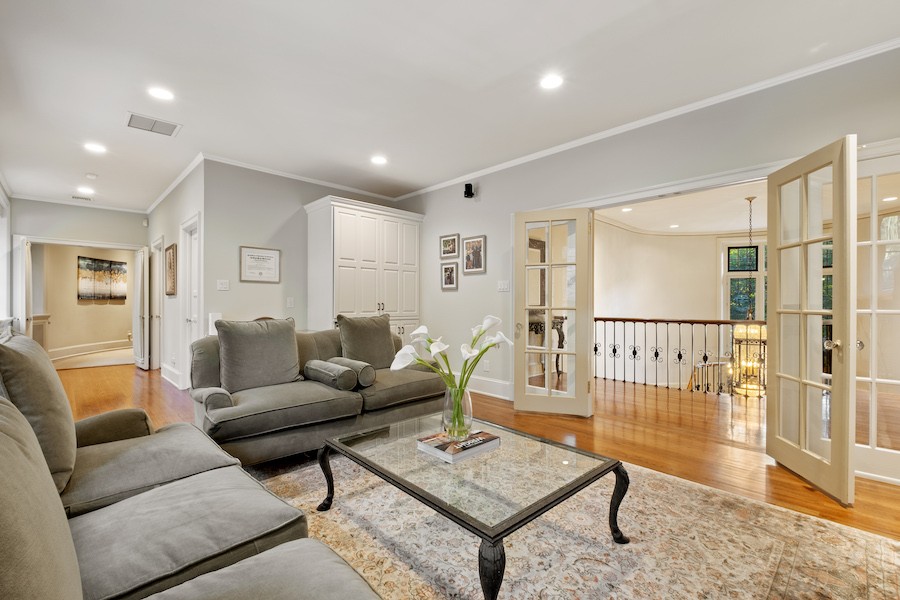 Living room of the master suite

Gardner / Fox did a masterful job of making it a unique single family residence. What was probably two, if not three, separate bedrooms originally has become a master suite. You enter this suite through its living room, which if this listing is a guide, may have been the original master bedroom, as there is a fireplace and this bedroom as well. 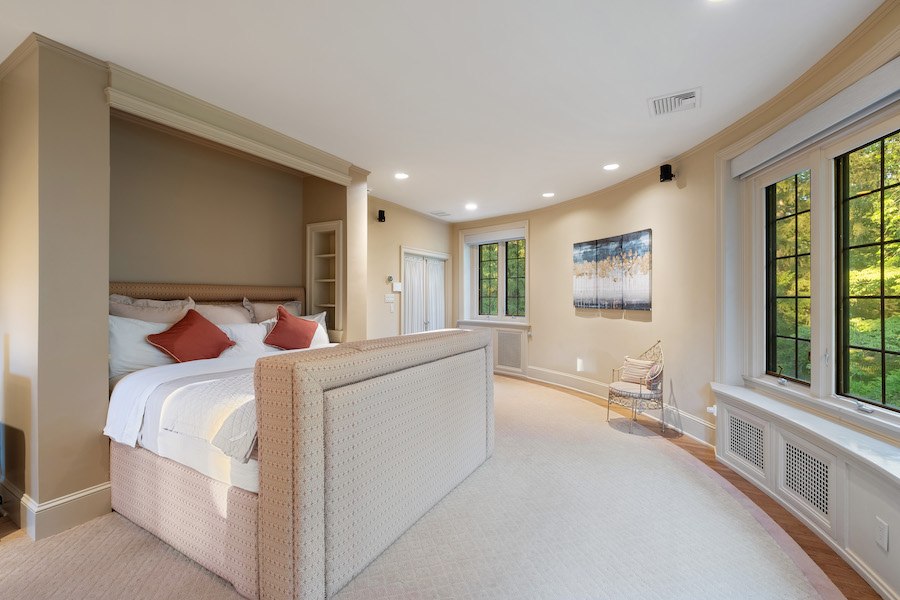 A hallway from there passes through two walk in closets on the way to the current master bedroom. It was probably the “sleeping porch” described in that ad. It takes its semicircular shape from the living room below. 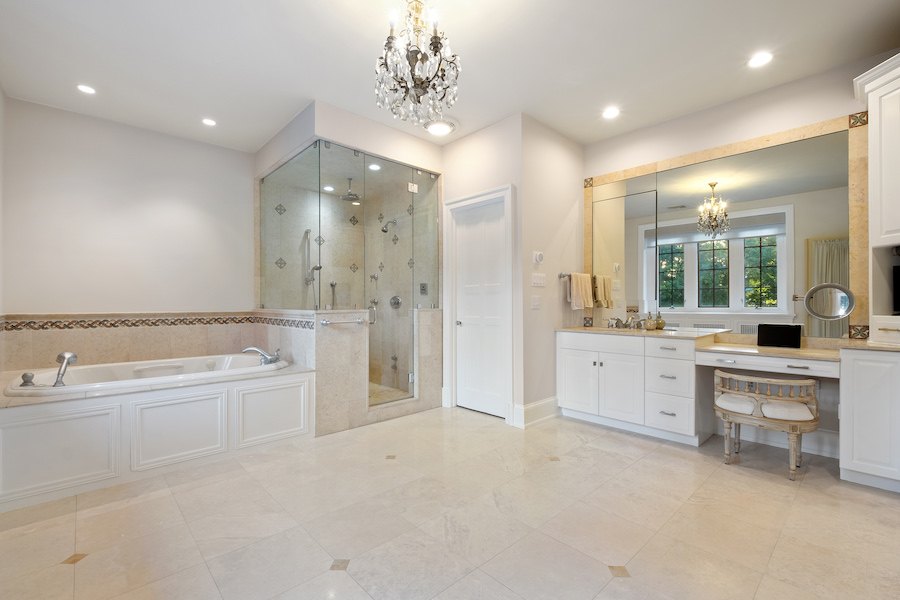 On the other side of the bed, French doors lead to the main bathroom. 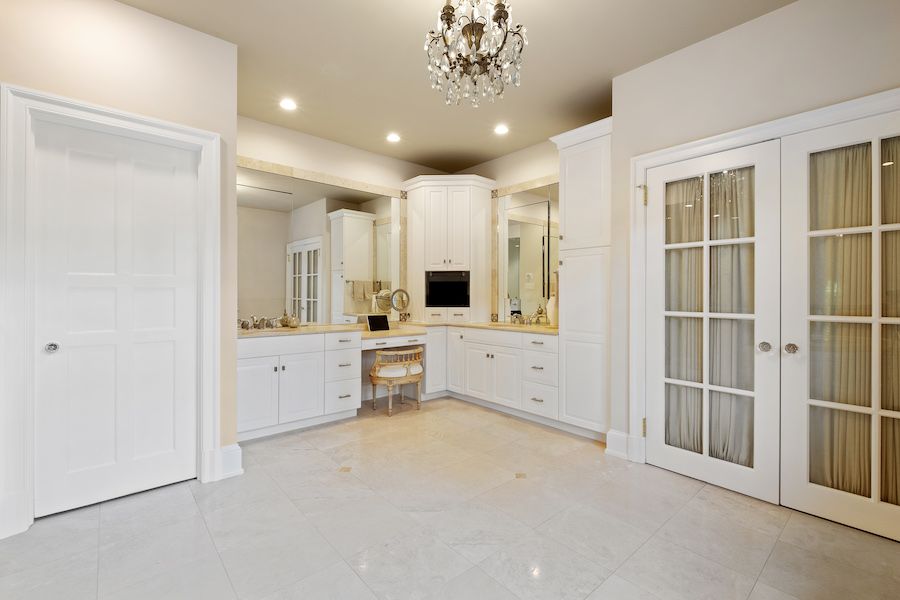 This room is nicely equipped with vanities for him and for her – his has a vanity table – and a flat-screen TV visible from the tub between the vanities. 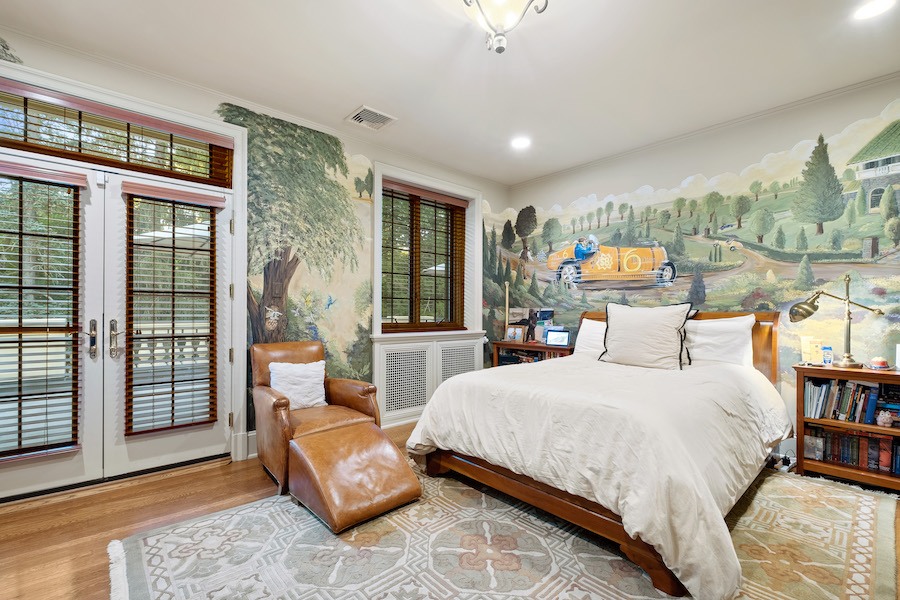 The current owners seem to share my love of transportation, as they have given one of the other bedrooms a charming mural of the house at the start of the car race. They can also channel the spirit of the Ballards: Hyde was one of the first presidents of the Antique Automobile Club of America, organized here in 1935, and Mary joined as its first female member in 1938. 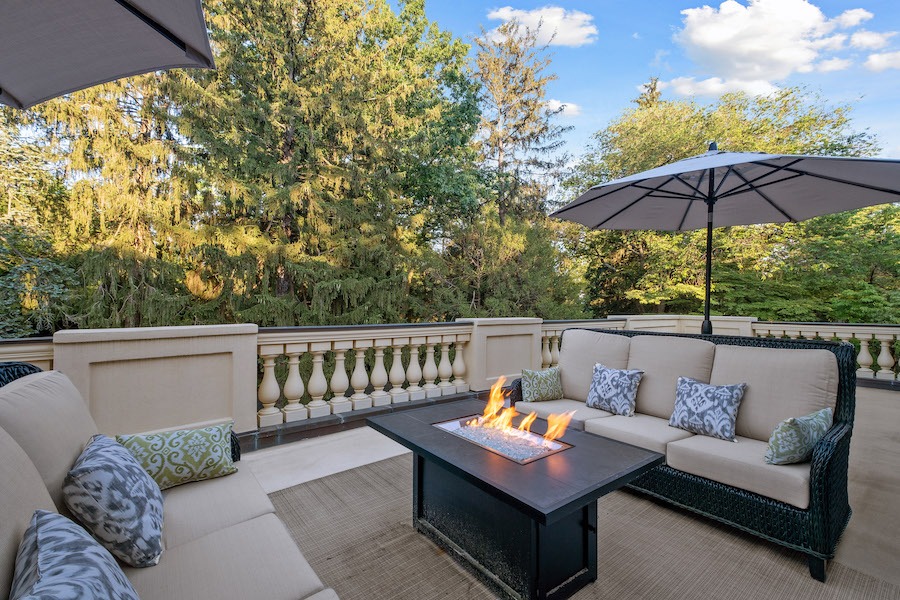 This bedroom shares a balcony with the master bedroom. 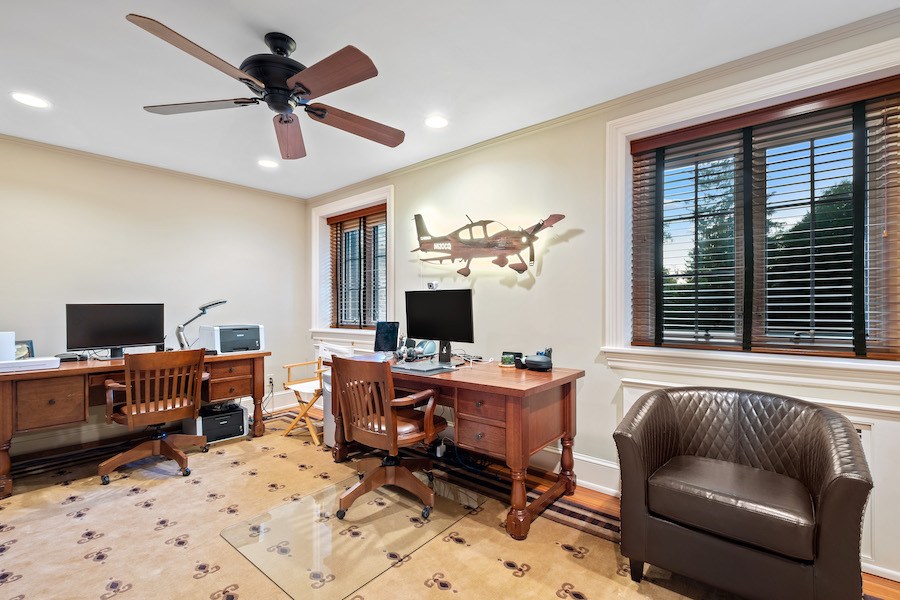 They also gave a third bedroom that currently serves as a home office with transportation-themed decor. A fourth bedroom has its own fireplace and all bedrooms have a private bathroom. 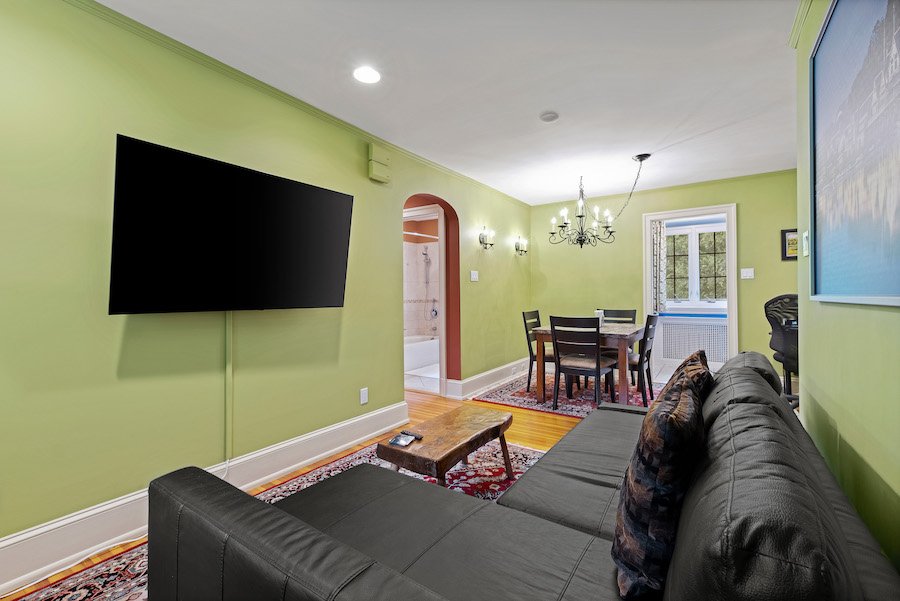 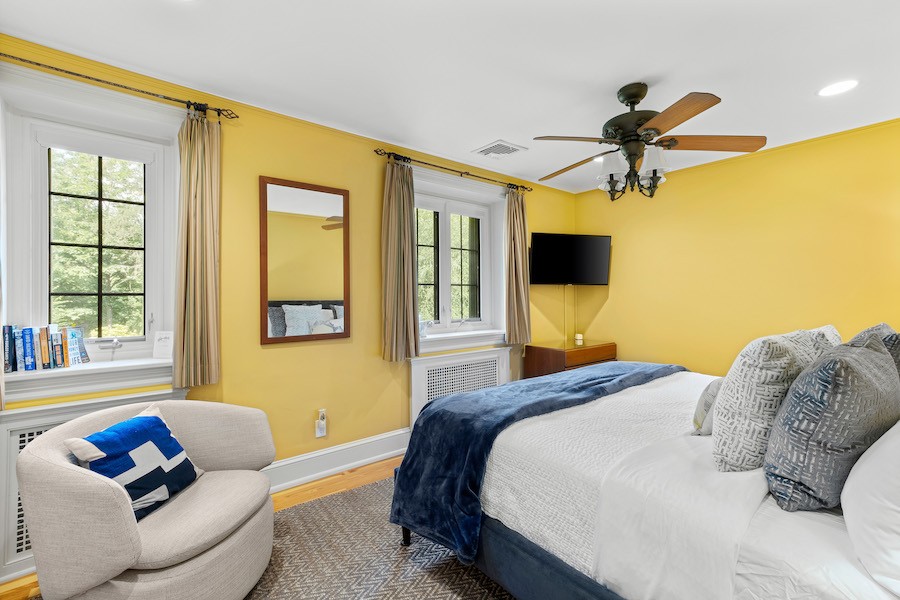 The only exception to this rule is the bedroom in the secondary apartment, which survives intact. The good news: The zoning of the land allows you to rent this apartment, which has a bathroom in the entrance and a small kitchenette with a microwave. The current owners use it as Airbnb.

Its 1.59 acre lot is nicely landscaped and surrounded by hedges for more privacy. And even though it’s in a fairly secluded part of Merion Station, you’ll find convenient shops and restaurants in Bala, Cynwyd, Narberth, and Wynnewood, all a short drive away, as is City Avenue.

Now that you have heard about this wonderful Italian house for sale in Merion Station and some of the stories it contains over its nearly 100 years of existence, aren’t you ready to add your own stories to history? The owners and the Lipowicze hope you are.

Updated July 28, 10:19 p.m., to correct Lauren Lipowicz’s name; we had mistakenly identified her as Diane.