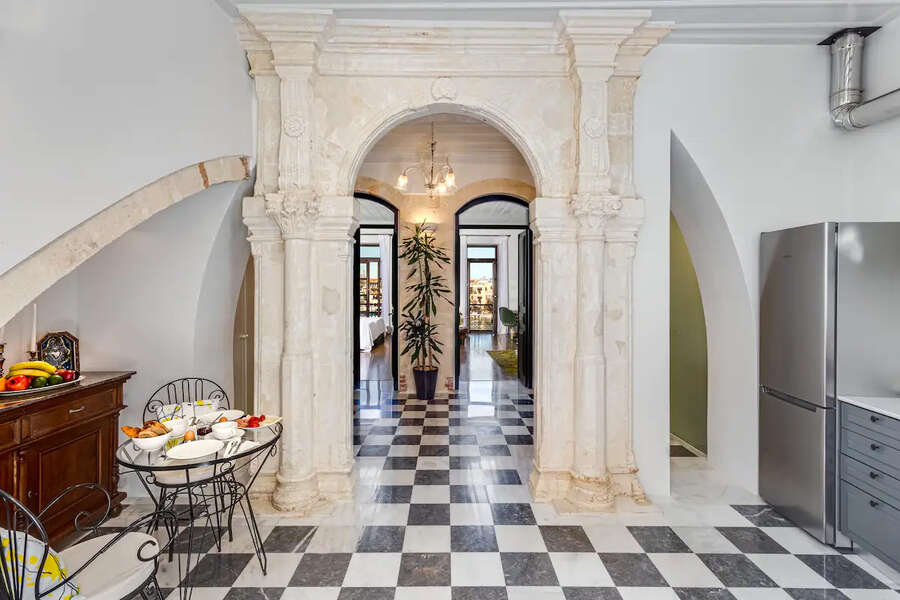 Domicile Chania strikes a perfect balance between preserving elements of Venetian architecture and a feeling of modernity and comfort. | Courtesy of Airbnb

Domicile Chania strikes a perfect balance between preserving elements of Venetian architecture and a feeling of modernity and comfort. | Courtesy of Airbnb

When I visited Crete in 2018, I had no idea what to expect from Greece’s largest island, known for its Minoan ruins (especially Knossos, the palace that is said to have housed the monstrous Minotaur from Greek mythology) and its Venetian architecture. What I found was something I’ve dreamed of returning to ever since: beautiful old towns, unique archaeological finds, transcendentally beautiful beaches, stunning mountainous terrain, and some of the most lush and memorable food I’ve ever had. I never had the pleasure of drinking. Crete is magical, and although it would take at least a month to explore it properly, it is possible to visit a few different areas of the island in just one week.

At the time of my visit, I was staying exclusively in hostels (and if you’re up for doing the same, Plakias Youth Hostel well worth the trip, from its location in an olive grove with towering mountains, to its sense of community for adults of all ages, and close proximity to stellar beaches). That said, after a few years and a whole pandemic, I find myself less inclined to revisit some of the other hostel accommodations of the past, especially a soulless dorm in the exceptionally soulful city of Chania. If I were to come back, I would like to treat myself to a stay at Domicile Chaniaa 14th century Venetian apartment overlooking the city’s historic harbour.

Chania is known for its picturesque Venetian harbour, and the opportunity to stay in the area is too good to pass up. Domicile Chania, built directly on top of the city’s Byzantine wall, originally served as the residence, treasury and archives of the Rector’s Palace while the city was under Venetian rule. The views of the sea and the Airbnb’s historic lighthouse are unparalleled, but the neighborhood is full of even older history. The building is part of the Kastelli district in the oldest inhabited part of the city; the area was inhabited since the Neolithic, and is the site of Minoan, Roman and Ottoman archaeological finds. History aside, it’s also a great base for exploring the rest of the city once you’ve had your fill of Kastelli, and several guests have praised its central location.

Wine and Cheeseburger: Harley and Lara pair Falafel with wine

That said, Domicile Chania is a destination in its own right, its restoration striking the perfect balance between preserving elements of Venetian architecture and creating a modern and comfortable space. The 700-year-old entrance remains relatively intact though weathered, leading directly into a stunning space with a 15th-century archway, checkerboard flooring, and a glimpse of the tall bedroom windows overlooking the harbour. The living room also has stunning water views, and better yet, two balconies provide a quiet place to sit and enjoy it all.

Unlike the historic details, the furnishings and decor are contemporary, but grand enough to feel comfortable in the space. You only get one bedroom, but the sofas in the living room convert into beds for up to three more people. The kitchen is spacious and functional, and each of the two bathrooms (one adjoining) is luxurious. If you have mobility issues, you might appreciate that the apartment has no stairs to worry about, despite being located on a hill.

According to previous guests, host Anastosios is wonderfully communicative, gives great recommendations about the area (from restaurants to things to do), and generally leaves plenty of treats for guests (think bread, fruit, wine, cheese , etc.) . If you want to stay in his Airbnb, Domicile Chania can accommodate up to five people and is currently listed at $335 per night. Considering the cool factor and the location, we think it’s a bargain.

A unique stay in Santorini.