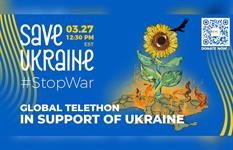 An international Save Ukraine charity concert will take place in Poland on March 27 to support Ukrainians affected by Russia’s invasion of the country just over a month ago.

The two hour concert has been announced Wednesday by the Ukrainian Ministry of Culture and Information Policy. It will take place at 12:30 p.m. ET in the Polish capital Warsaw and will be broadcast live in around 20 countries, as well as on YouTube, streaming platforms and social networks.

More than 80 PR professionals from Red Havas and Havas PR Global Collective have stepped up over the past 48 hours to support the live telethon, concert and hashtag. They reach out to media in the US, Europe, Middle East and APAC markets and work throughout the weekend to promote the event. The team working there locally is spread across western Ukraine, Israel and Poland.

“I would like the whole PR community to come together and share the hero asset with the QR code and push the Save Ukraine #StopWar campaign through their own agency channels.”

Hosts of the event are Ukrainians Timur Miroshnychenko and Masha Efrosinina. Several fan zones are organized in cities around the world for people to watch the telethon.

The Save Ukraine – #StopWar telethon is organized by the music and artistic event Atlas Festival and the Ukrainian telecommunications operator Kyivstar. It will be broadcast on the Polish television channel TVP.

Fundraising for the telethon is handled through the official accounts of the National Bank of Ukraine and the Ministry of Social Policy of Ukraine. The money will be collected before, during and after the broadcast and used to meet food needs and accommodate refugees and Ukrainian citizens who have left their homes due to hostilities.

The funds will provide them with clothes and shoes, medicine and medical equipment. It will also provide the population with basic necessities, one-time financial assistance and meet other priority human needs.

Since Russia invaded Ukraine in February the global business community has imposed unprecedented economic sanctions against the country led by Vladimir Putin and provided Ukraine with financial, military and humanitarian aid.

Already registered with us?

Sign up now to enjoy more free articles and e-newsletters