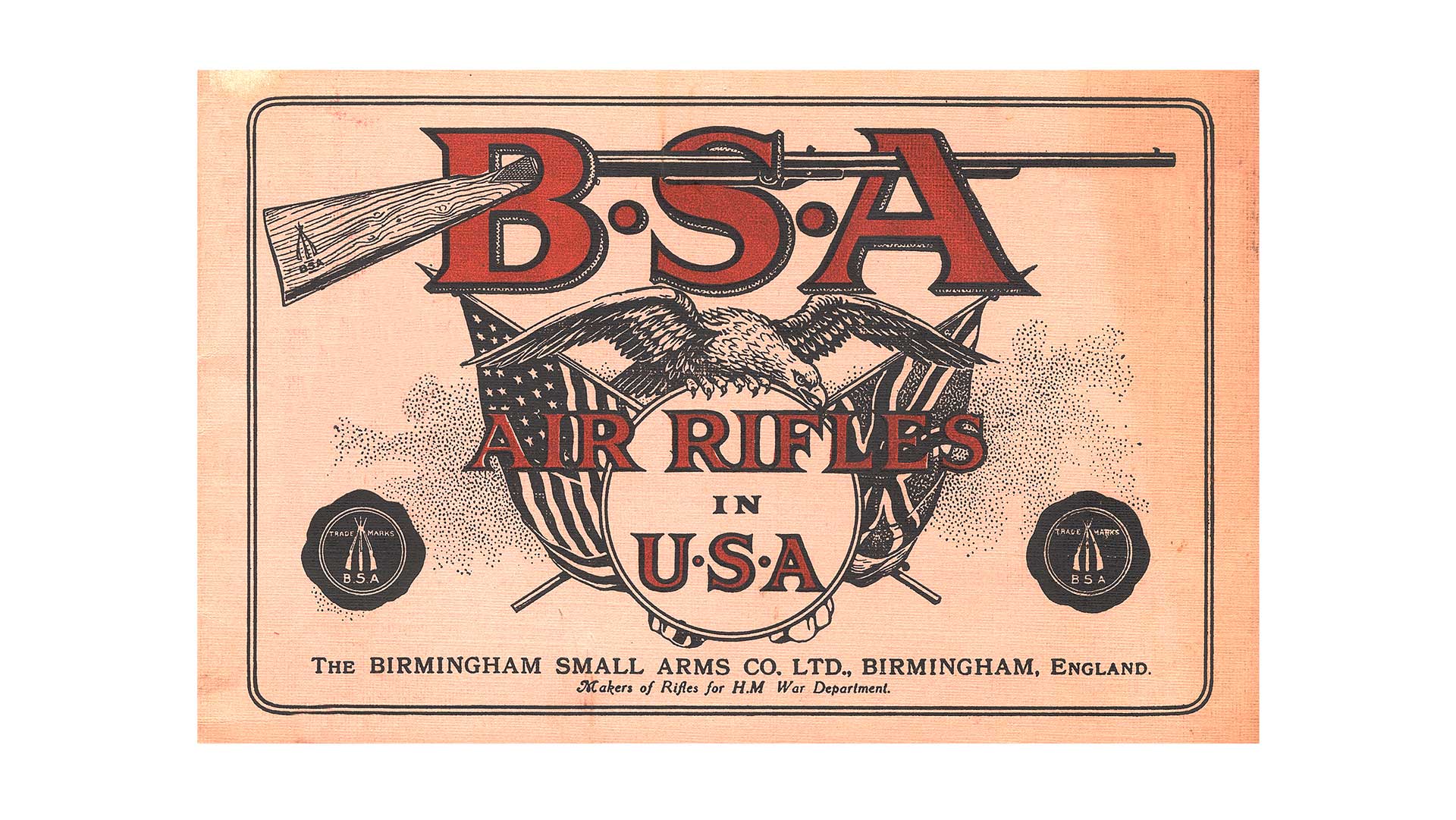 The history of small arms in Birmingham

When “gonzo reporter” Hunter S. Thompson ran off with a biker gang to write Hells Angels, he wasn’t riding a Harley. He rode a 650cc BSA Lightning, America’s fastest production motorcycle in 1966. Not really surprising; At that time BSA had been making motorcycles for over 50 years and firearms for over 100. The old adage that necessity is the mother of invention could have been invented with BSA in mind, because Birmingham Small Arms Co., Ltd., was not owned by the UK government, it has always been a private company.

Birmingham evolved as a city of blacksmiths with local blacksmiths making not only steel farming tools but also swords and armor for the landed nobility. The first British government contract for firearms came for 200 Snaphaunce muskets per month to be produced by a Birmingham blacksmith confederation in 1689. This style of group contract continued for 150 years. By the time Napoleon was defeated at Waterloo in 1815, it was estimated that the 7,000 workers in the arms trade in Birmingham were producing arms at the rate of 525,000 per year.

Even after the Napoleonic Wars, the small arms trade continued to flourish. But in the 1850s, the British government’s Enfield gun factory embraced the Industrial Revolution and installed machinery – and Birmingham was in trouble. In June 1861, the Birmingham Small Arms Trade held a meeting and decided to form a company, “The Birmingham Small Arms Company”, to manufacture machine guns.

Modern weapon-making machines were a mixed blessing. The factory could produce better guns faster, but it would need large orders to make it profitable. After a shaky start, BSA received its first large order for 50,000 Enfield rifles from the Turkish government, and the future looked bright. However, with a manufacturing facility designed to mass produce military small arms, BSA’s future depended on each new contract. To diversify and create a product with constant demand, BSA entered the bicycle sector in 1880; but the real money was still in small arms, like the tens of thousands of Martini-Henrys produced under contract to the government and both as hunting rifles and military-style target rifles. Additionally, BSA was in the air gun business as early as 1904.

BSA goes to war
When World War I began, BSA was on the ropes, and although it had a contract for Lee-Enfield rifles, it could only produce around 650 a week. Working around the clock, BSA returned and, within two years, was producing 10,000 rifles per week. By the end of the war, BSA had produced 1,601,608 Lee-Enfield rifles, but that’s not all. Machine guns had seen the light of day and BSA quickly acquired the technology necessary for their manufacture.

In 1912, a US Army officer by the name of Isaac Newton Lewis visited BSA and brought a prototype machine gun he had designed, running on gas, cooled by air and fed by a loader. BSA immediately recognized the value of such a small and compact mobile machine gun and negotiated a contract for the manufacturing rights. In 1913, BSA mounted a Lewis on a Graham-White aircraft and fired at a white sheet lying on the ground at 500 feet as a demonstration for the British Army.

The British officers present, leaning on their cavalry sabers, considered the demonstration a good move, but without any practical military application. They did, however, see the Lewis pistol as something that might prove useful and ordered a few. BSA eventually built over 100,000 Lewis guns during the war. In addition to machine guns and rifles, BSA also supplied the army with folding bikes and motorcycles in several configurations, some with sidecars fitted with Lewis guns. By the end of the war, demand was down for almost all BSA products except motorcycles.

BSA was kept alive by producing motorcycles but, as the Depression dragged on, even sales of motorcycles nearly dried up by 1939. Company directors refused to scrap the machines to make motorcycles. Lewis guns and pistols, and the wisdom of this decision was proven when, a few months later, Hitler invaded Europe. The RAF needed Brownings for their Spitfires and Hurricanes, and BSA made the .303 caliber. Browning machine guns mounted in the wings of British fighters.

During the “Blitz”, lookouts climbed on the roof of the BSA to watch the skies for Nazi bombers. For the most part, older men and women made up the factory workforce, as most able-bodied men were needed in uniform. When the air raid siren sounded, many employees continued to work on their machines until the last moment before taking cover. Some workers refused to leave their posts, and they died at their machines. The Germans shelled the BSA with explosive and then incendiary bombs, destroying buildings and machinery, but each time the BSA would rise from its ashes and go back into production. BSA was never taken out of action, and throughout the war it continued to produce firearms and motorcycles.

Lean and leaner years
Peacetime has always been a difficult time for BSA, and the years following World War II have been lean for manufacturers of military small arms. BSA has offered civilian weapons or civilian versions of its military weapons since its inception. The Enfield military style muzzle chargers were replaced with large caliber Martini-Henry drop blocks, and later the Martinis were superseded by Lee-Enfield.

Its smallbores made from .22 and .310 Martini (there were also many other chamberings) were produced on and off from 1911 until the 1980s. The last version, the Martini ISA Match .22, was discontinued in 1985. Beginning in the late 1950s BSA also offered bolt action specific hunting rifles including the Royal and Majestic, Majestic Deluxe and Monarch Deluxe until 1974. In 1986 a new range locks included everything from varminters and Mannlicher Stutzens to custom bolt action shotguns. The last BSA rifle model imported to the United States was the CFT Target single-shot 7.62x51mm rifle, but it was discontinued in 1987.

Almost as well-known as the Martinis were the many side-by-side boxlocks bearing the mark of the three BSA rifles. Production of “The BSA Hammerless Shot Gun” began shortly after WWI. Usually English styled with a straight hilt and a bursting handguard, these Anson & Deeley based boxlock pistols were typically made in 12 gauge with extractors only and dual triggers. As a 1920 BSA advertisement proudly proclaimed, these guns were “one of the world’s greatest achievements in machine production.”

BSA also returned to producing motorcycles in earnest after WWII, and for a while in the 1960s and early 1970s things looked pretty good. Unfortunately for BSA, a small Japanese motorcycle manufacturer arrived with a marketing approach far removed from the bad boy image that motorcycles had garnered. With small 50cc electric start scooters and an advertising slogan that read “You meet the coolest people on a Honda,” Honda Motorcycle Company nearly bankrupted BSA and other British motorcycle manufacturers. It looks like the death knell for BSA has sounded, but BSA is simply too big a name to slip into history.

In 1985 the Spanish manufacturer of air rifles Gamo acquired the rights to the name BSA and launched a range of sports optics at attractive prices. The BSA line of riflescopes and binoculars were successful, and as the business grew, Gamo began to research another product line to fit the BSA banner.

It was in 2003 that a new range of BSA rifles – “BSA Imports” – was launched on the American market. The first BSA Import pistol to come to the United States was named “Classic S / S”. A slender little boxlock, available in all calibers, from caliber .410 to caliber 12, the name “Classic” was quite appropriate. Both over-unders and autoloaders came from the legendary gunmaker’s United States. With a wide selection of bore sizes for everyone.

The former Birmingham Small Arms Co. is a name that just refuses to stay down.

This feature was updated from its original appearance in the March 2005 issue of American rifleman. To subscribe to the magazine, go to RNA membership page and select American Rifleman as a member magazine.