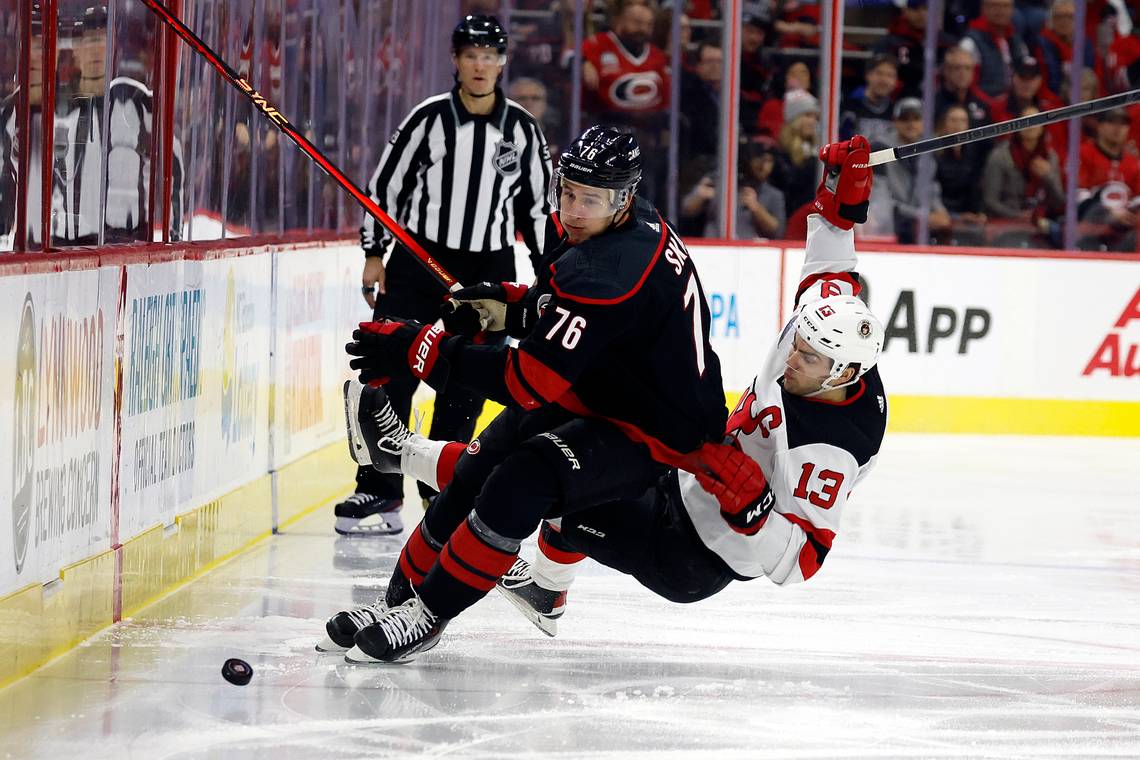 Are the Hurricanes and Devils back on the playoff collision course, 14 years after the last?

Fourteen years is too long.

There was a time, a time ago, when the Carolina Hurricanes and New Jersey Devils seemed destined to meet in the playoffs year after year after year. Then the hurricanes lost their relevance, and when they returned, the devils did the same, and the two will never meet.

But based on how the Metropolitan Division and Eastern Conference are rocking this season, there’s a good chance the weather has returned.

And based on how their games have gone this season, there’s also a good chance a Canes-Devils series will be as fun as ever. Maybe even more.

Tuesday night was a disaster for the Hurricanes, who led by two goals before the last minute of the second period and ended up losing 5-3. But it was an entertaining disaster, full of wild swings, a pair of shorthanded goals, a controversial winner – replays showed Dawson Mercer’s breakaway was triggered by a high stick, but officials l ‘ve missed and it’s not a tough game outside of the offensive zone — and an epic meltdown of the Hurricanes’ third defensive duo of Jalen Chatfield and Dylan Coghlan.

Pyotr Kotchetkov was also mediocre, and while the rookie helped the Hurricanes through their winning streak, he clearly needs time in the AHL to recalibrate. Frederik Andersen, who has been training for over a month, cannot return soon enough – and could as soon as Thursday, although the weekend looks more likely.

Tuesday’s savage loss came on the heels of their last meeting with the Devils in Newark nine days ago, in which the Hurricanes led 2-1, 3-2, fell 4-3 and finished by winning in a shootout. The win extended the Hurricanes’ winning streak to 11. They now have a new streak, 0-3-1 since then.

Nonetheless, they remain ahead in the subway at the midpoint, and while all of that will continue to evolve, enough of the conference picture has hardened to put these teams on a collision course in the playoffs. It seems safe to assume at this point that both wild cards will come from the subway, meaning the Hurricanes, even if they were to somehow catch the Boston Bruins, will start the playoffs within the division.

The odds are more or less even between the Devils, New York Rangers, Washington Capitals, or Pittsburgh Penguins, as any of those teams could finish anywhere from first to fifth, and the Islanders of New York still have a chance to make their way into the picture. .

“We know how good everyone is in the division,” Hurricanes coach Rod Brind’Amour said Tuesday morning. “The classification, I have already told you, we don’t really look at it. Maybe we’ll start when we get to the bottom of it. But 20 games from now, everything could be turned upside down anyway.

It just feels like, though, that these teams will meet again, and not just in March. There’s a little steam in the kettle, and not just because Erik Haula is on the Devils roster. Miles Wood, born (though not raised) in Buffalo, was as surly as a typical Sabers fan at the PNC on Tuesday, throwing his weight and trying to perform impromptu dental work on Coghlan with his stick. He didn’t draw any blood, but there’s some bad blood churning.

And given the Devils’ offensive talent — Jack Hughes was held scoreless on Tuesday, a rarity — and their willingness to play offense, a predilection they share with the Hurricanes, those teams tend to look to the default drama. If they do end up playing together in the playoffs, there’s every reason to expect things to be crazy in a way that they aren’t against the Bruins or Rangers.

They were in 2009, a playoff between teams with very different personalities than they have now. It was 2006 when the Hurricanes walked into Martin Brodeur’s kitchen and cooked a full meal. It was 2002, when the Hurricanes got revenge for 2001, and it was 2001 when Scott Stevens knocked out half of Carolina’s roster in a series that, despite the loss, forever changed the course of the franchise. of the Hurricanes.

The Hurricanes and Devils could have more than one game to play this season. Let’s hope so.

Never miss a column from Luke DeCock. Register on tinyurl.com/lukeslatest to receive them directly in your inbox as soon as they are published.

Latest from Luke DeCock: Never miss a column on the Canes, ACC or other Triangle sports