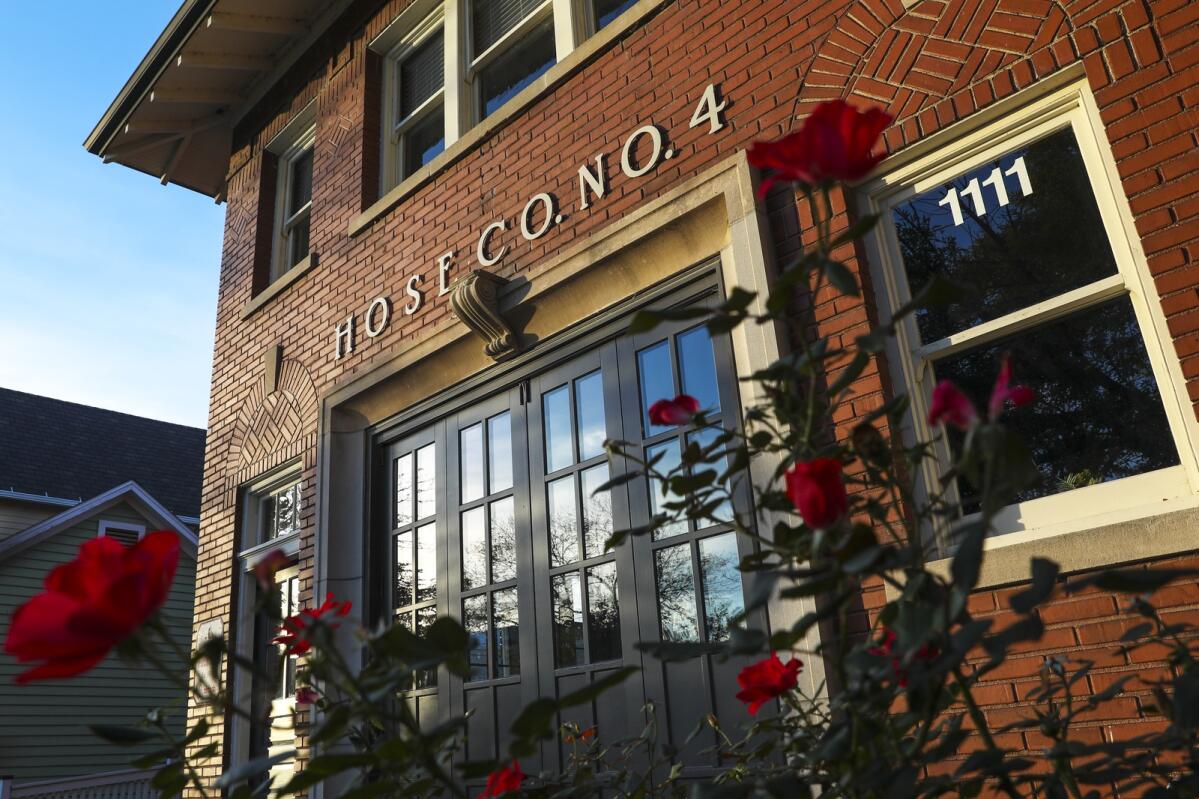 The sun rises over the 1916 Cedar Rapids Fire Hall which was recently converted to AirBNB in ​​the NewBo district of Cedar Rapids. (Geoff Stellfox / The Gazette)

Afternoon light shines through the windows of the master bedroom on Tuesday in the NewBo district of Cedar Rapids. (Geoff Stellfox / The Gazette)

CEDAR RAPIDS – The former fire station at 1111 Third St. SE is entering a new chapter after a rich history in the New Bohemia District.

Since retiring from its original purpose in the late 1950s, the 1916 building has housed several businesses: an accountant’s office, Lyn Novelty Co., a tattoo parlor and adult bookstore, as well as ‘a private residence.

In good times and bad, the structure has managed to withstand two major floods and the derecho of August 2020. Now it opens its doors to visitors wishing to rent a piece of history through AirBNB.

“It’s great to have this story to restore and really use,” said Mary Kay McGrath, who bought the building with her sister-in-law Sue Novak last October from the non-profit arts organization CSPS.

“People can stay here and really experience it,” Novak said.

The building is McGrath’s third AirBNB, managed by Novak. Since they listed it in June on the popular site for travelers who choose to rent homes instead of staying in a hotel, they’ve only had an unbooked weekend. For $ 139 on a weekday evening or $ 149 on a weekend evening, visitors can experience the character of the building at a time when firefighting was a fragmented private enterprise rather than a publicly funded enterprise.

Inside the small building, the devil is in the details.

Past the quaint front doors, a hallway created in vintage style with reclaimed materials provides a separate entrance for tenants to climb the narrow staircase to their apartment. On the lower level, Stationery Scribe will open soon as a stationery and gift shop.

Here, four firefighters lived and slept in bunk beds. In the bathroom, you will find a vestige of their presence with four separate cupboards for each firefighter.

Around the apartment, historic finds from flea markets and garage sales, like antique copper fire extinguishers, set the scene. Most of the apartment has not been altered from its original cosmetic condition, emphasizing the original features of the house.

“Cosmetically, we haven’t done much,” Novak said. “We wanted to preserve it as much as possible.

In addition to structural fixes, Novak and McGrath repaired parts of the original doors and added vintage-looking covers to the radiators, as well as themed decorations.

“Now I’m addicted to it,” Novak said. “I’m always on the lookout for fire stuff.”

A photo of another historic CSPS building around the corner in NewBo, the Bohemian-American Hose Company, fills the wall behind the bed showing the firefighters’ horses allegedly fed just behind that house. Another print on the opposite wall shows the original wooden structure that was in place for about 15 years before the current brick building was constructed.

A hole in the ground where firefighters slipped a pole on the lower level remains, covered by the sofa on the upper level. The post was removed in the 1940s, Novak said.

The original windows reflect the manufacturing standards of the time, with waves and imperfections in the glass facing the street. Most of the floors and lights are original.

Soon, the owners hope to transform the personal firefighters’ cupboards in the bathroom into a mini museum with a selection of artifacts and memorabilia.

History of the building

Before a fire department was officially part of the city government of Cedar Rapids, all firefighting services were provided by competing groups of volunteers, according to longtime Cedar Rapids historian Mark Stoffer Hunter. At one point in the late 1800s, there were nearly a dozen private firefighting companies in the city.

The construction of this brick building – a replacement for the old wood-frame structure – was one of six built between 1906 and 1926 that signaled the permanence of firefighting services. Five of the six brick structures are still standing in 2021; one was demolished in 1997.

“They formalized the fire stations,” said Stoffer Hunter. “1111 was that process of… replacing a timber frame and sending a message to the public that your fire protection service at Cedar Rapids is now permanent. “

The site was chosen for a fire station, in part because of its proximity to large factories, which tended to be at the greatest fire risk at the time. At the end of Third Street was the Sinclair Meat Wrapping Plant; a former steel and iron factory stood where the NewBo Town Market is today.

The term “pipe company”, as the facade of the NewBo building still indicates, was a predecessor of what was later called the fire stations, representing the fact that they were “a company of men appointed for bring and manage hoses in extinguishing fires. », Explained Stoffer Hunter.

Each pipe company had official names indicating the neighborhood in which it was located. The Bohemian-American Hose Company, which operated near 219 11th Ave. SE, was the private predecessor of Hose Company No. 4, the fourth permanent fire. station established by the city government.

When this Third Street SE building was constructed in 1916, the city was still using horse-drawn vehicles to fight fires. In the mid-1920s, the city switched to motor vehicles.

“It was even more cost effective to use horses when this was built,” said Stoffer Hunter.

The building was abandoned as a fire station, along with another at 404 17th St. SE, in the late 1950s, shortly after a new fire station opened in the South Quadrant. is on Mount Vernon Road SE. With a central fire station at 427 First St. SE, Hose Company No. 4 has become redundant.

As factories, a slaughterhouse and sources of employment dried up in the 1980s until 1990, the region became economically depressed. Retailing also dried up for a while.

Stoffer Hunter said the city planned to demolish the neighborhood and rebuild it more than once in the 1960s. These attempts were repeated after the 2008 flood.

“Nobody really invested in this area until the 1960s, but nobody destroyed much either. So everything has stuck in time, ”he said. “Buildings like this fire station have had to ride the wave and wait for better times. “

And until better times come, it took every tenant possible.

An accidental owner with a purpose

McGrath started his real estate business three years ago just wanting to own a building. A lifelong resident of Cedar Rapids, she wanted to restore the vigor of the Czech village she grew up near as she watched it begin to decay.

“I wanted to preserve (the buildings) and give them new life and bring back the bustle of the Czech village that was there years ago,” she said.

She said she started by ordering the opening of a cafe, useful as a social institution to get together, which culminated in Cafe St. Pio at the corner of SW 16th Avenue and C Street. SW.

After her first building purchase, she quickly realized that the nature of her mission was “a global deal”.

“I had to buy them all,” said McGrath, 66. “For me it has been a labor of love. I love old buildings and preserve them.

Although her mission was not an accident, she calls herself “an accidental owner with a purpose”.

McGrath and Novak consider it an honor to be the stewards in preserving the history of the former NewBo Fire Hall as a new flame of life is lit in the building.

Co-owner Mary Kay McGrath shares how she found the fire hall building in the NewBo district of Cedar Rapids. (Geoff Stellfox / The Gazette)

A fire station mural covers the walls of the master bedroom. (Geoff Stellfox / The Gazette)

A copy of the Cedar Rapids Fire Department History is waiting to be read. (Geoff Stellfox / The Gazette)

Want to stay in the best houses in the world? It could be cheaper than you think