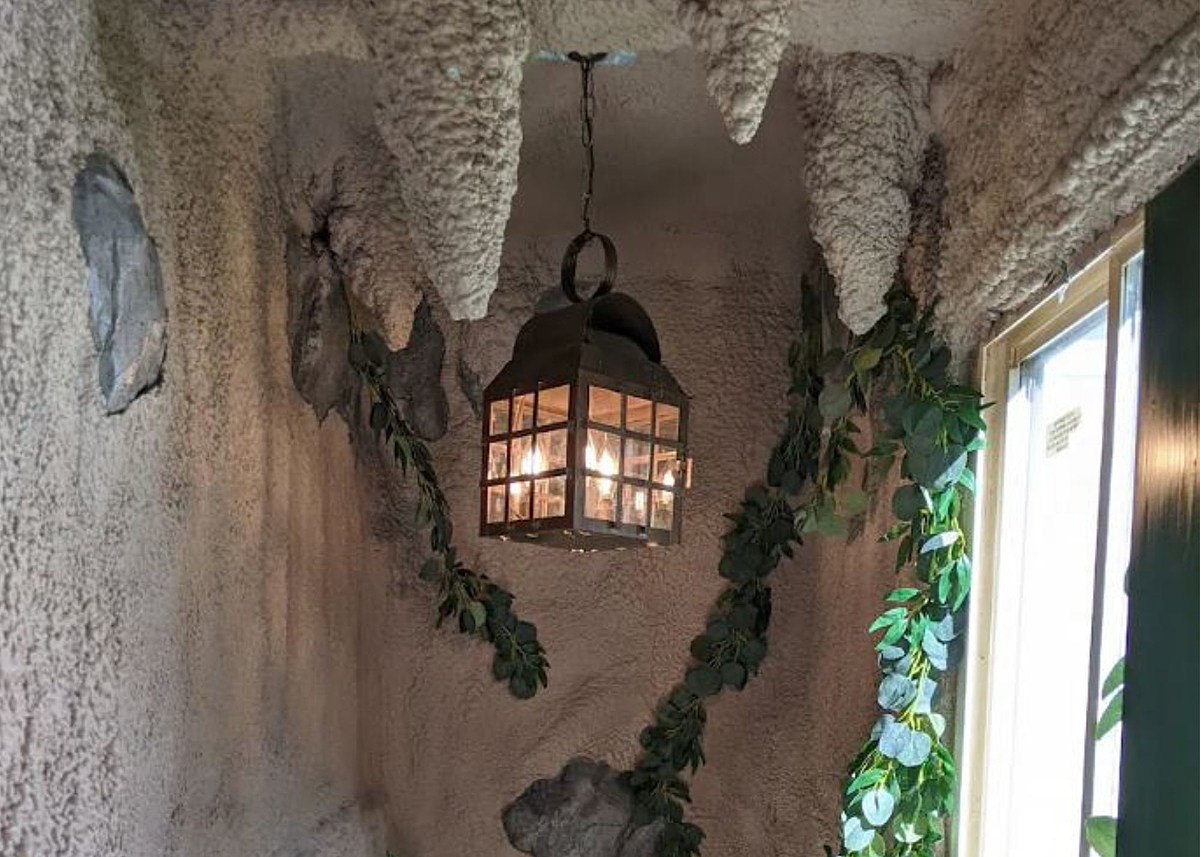 Calling all LOTR fans: Gollum’s Cave is actually pretty close to QC and you can stay there for less than $100 a night.

Airbnbs often have a unique theme and this one Bartonville, IL is no exception. It’s about an hour and a half outside of the Quad Cities. Inspired by Gollum’s Cave from “Lord Of The Rings”, it is part of a full LOTR themed duplex – the upper level is called The Hobbit.

The Cave isn’t an expensive stay either, only $77/night. As you descend into the cave, it sets the mood with realistic stalactites hanging from the ceiling and a lantern. It has a full kitchen so you can make your second breakfast, a queen-size bed (there’s a section that can also become a bed), and amenities that Gollum probably didn’t have in his cave, like the wifi and an indoor gas fireplace. The cave is in the basement of the duplex, so FYI, you’ll likely hear creaking floors if someone is staying in the Hobbit above you.

Even with all the modern features like a tiled shower and smart TV, it still retains the cave feel. You will see it in the photos below.

Outside, you are welcome to use the fire pit, grill and relax on their back patio. Ready to book it? You can get more details about it and see availability here. You can get more information about renting the Hobbit level of the duplex here.

Scroll down to see photos of the Airbnb of Gollum’s Cave, my precious.

My precious! Gollum’s Cave is close to QC and less than $100/night

An Airbnb in Illinois is designed to look like Gollum’s Cave from “Lord Of The Rings.” Scroll down to read more and see photos!

We asked listeners where their favorite place to watch Iowa football is, and here’s what they suggested.

10 household chores to prepare your home for the fall season

When September rolls around, I’d like to think the world is splitting in two. One half clings to summer with all they’ve got, while the other half is already starting to put pumpkins around their house and watch horror movies by the fireplace.

Although the official first day of fall is September 22, many people like to start fall traditions early because it excites them and gives them that warm, fuzzy feeling. As the days get shorter and the weather changes, there are tasks to complete as an owner. Not only does the mood change with the seasons, but the household chores also change.

Here are 10 ways to prepare your home for fall.