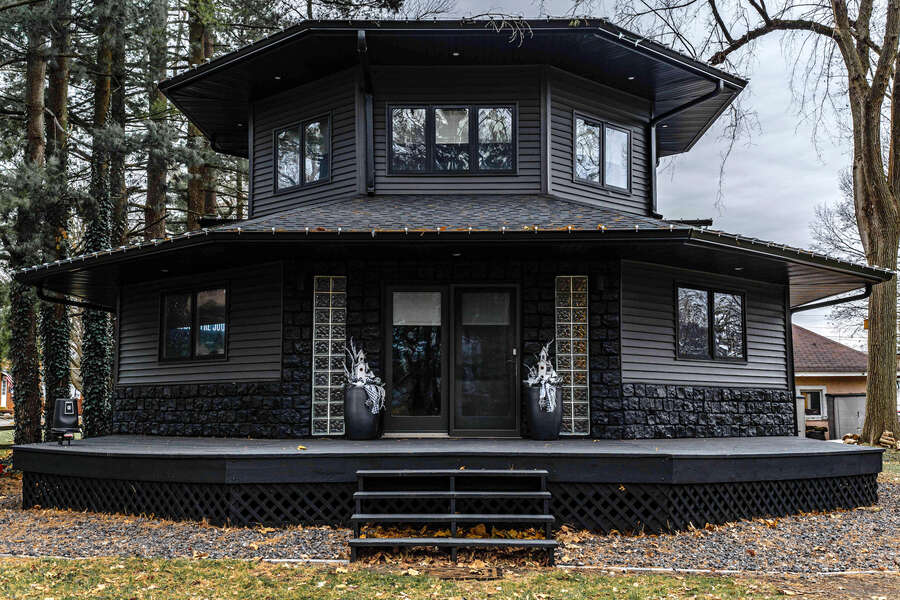 While most people decorate their homes in shades of black during the Halloween season, some of us don’t need a holiday to embrace our inner darkness. We suspect the owner of this Airbnb in Lincoln, Illinois, is one of those people. With an inexplicably spooky octagonal shape and black paint covering every surface, this “Goth House” (named by the host) really is the stuff nightmares are made of – and we mean that as the highest compliment.

This 1,500 square foot home was originally built in 1993 but had a complete overhaul in 2021. According to the owner personal account on Newsweek, the renovation included rebuilding the rooms and adding some exterior features (including a pergola and fire pit), but most of the changes were cosmetic: namely the addition of a black roof and black siding, and painting the garage and all interior walls black. Even the landscaping rocks have been replaced with black. The aesthetic is particularly striking given the home’s location in the middle of a residential neighborhood – it looks like the Addams family decided to move to the suburbs.

The history of tailgating

Despite its inky color, the home stays surprisingly bright thanks to white crown molding, tons of windows, and skylights in the master bedroom. Some of the original features of the house are still standing, including the very cool spiral staircase connecting the two levels, but the interiors are quite modern with contemporary light fixtures and neon signs on the walls. (“Enjoy the journey,” says the sign in the living room, while the bedroom is adorned with “The world is yours.”)

In addition to two bedrooms and an open living/dining room, the Goth House has two bathrooms that are — surprise! — completely black with white tiles. The master bathroom on the top floor is particularly stunning, with a marble walk-in shower that looks about the size of a New York studio apartment. On the lower level, guests also have access to a fully equipped open-plan kitchen with granite counter tops.

Lincoln, Illinois is a great city to visit during the fall months, especially if you can join one of the many downtown ghost tours. The city is about two hours from St. Louis and two and a half hours from Chicago, making it a perfectly spooky weekend getaway for Midwesterners.

The Goth House has enough space for nine guests, and that’s currently listed at $214 per night. The listing has an impressive 4.92 rating, with customers praising the “great neighborhood” and the “awesome coffee bar.” A guest also said, “The interior designer of this house deserves an award! We totally agree.

Looking for a spooky escape? These Airbnbs will send shivers down your spine this Halloween and beyond.

11 hotels that do everything for Halloween