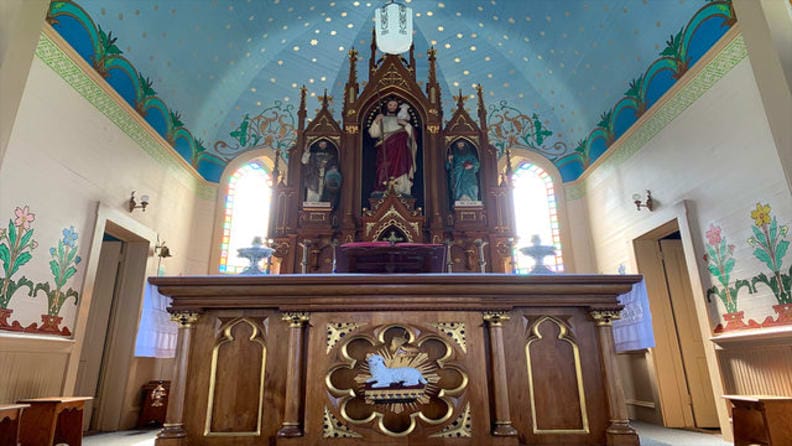 The 5 Most Beautiful Painted Churches in Texas, Including St. Paul and Serbin Lutheran Church

The painted churches of Texas are breathtaking, historically significant, and culturally significant. They are not to be missed if you are a believer or just an art lover.

Texas painted churches dot the center of Hill Country, a living heritage of the 19th and early 20th centuries.

Immigrants who wished to bring a piece of their old life to the New World erected and decorated them in the style of the great Gothic cathedrals of Europe. Visit the painted churches, most of which are Catholic, is the closest you will have to visiting the shrines of Germany, Austria and the Czech Republic in the United States.

If you’re an avid pilgrim, architect, or fresco lover, the painted cathedrals in Texas should be on your to-do list.

Immigrants from Eastern Europe and Germany flocked to the central hills of Texas in the 1800s and early 1900s. With them came their customs and city names. Praha, Schulenburg, Dubina, Serbin, and Fredericksburg are still steeped in Teutonic and Slavic culture today, and their restored painted churches are magnificent symbols of the customs, morals, and creative sensibilities of the early settlers.

There are around 20 painted churches left today, many of which are in or near Schulenburg, which is why they are often referred to as the Painted Churches of Schulenburg.

But Schulenburg is not the only town to have these holy relics; we’ve listed our six favorites below, which can be found in Serbin, High Hill, Ammannsville, Dubina, Fredericksburg, and Praha.

The best painted churches are:

St. John the Baptist, sometimes known as “The Pink Church,” is a dusty rose vision in Ammannsville, a small ghost town. Ivy and angel figures are scattered throughout the sanctuary, with gold stenciled designs on a light pink base.

Green floors and a plethora of painted statues add to the appeal of the church. The original murals were created by Fred Donecker and Sons, who identified themselves as “fresco painters”.

The stained glass windows of the church depict the history of the Czech heritage and history of the region and are a lasting tribute to the first settlers. The current building, built in 1918, is the third on the site. The first church was destroyed by a powerful hurricane in 1909, and the second was destroyed by fire eight years later.

St Paul’s Lutheran Church in Serbin, built in 1870 under the direction of Rev. John Kilian, is the only non-Catholic painted church on our list. St. Paul’s has cerulean ceilings with golden accents and columns painted with exquisite floral patterns and faux marble finishes, which were once the place of worship for Wendish immigrants who left Hamburg, Germany in search of farmland.

St. Paul’s was a modest wooden church for the first 36 years of its existence.

However, in 1906 the community decided to freshen things up by painting the church without the help of a professional artist.

St. Paul’s Lutheran Church also has the largest pulpit in Texas, rising 20 feet above the ground! There are also two levels of pews in the church. Men sat on the upper floors, while women and children sat on the lower floors.

Church of St. Mary of the Assumption, Prague

The oldest painted church in the area is St. Mary of the Assumption Church in Praha, Texas, which was built in 1895. The original artwork was by artist Gottfried Flury, and additions have been made added by the pastor of the church, Father Netardus, an amateur painter and musician, in 1901.

Another artist, Gene A. Mikulik, applied gold leaf to areas of the sanctuary in the mid-1900s and painted “Our Lady of Victory,” the mural of the Virgin Mary, a hallmark of the church. The blue-green vaulted ceiling of St. Mary of the Assumption Church is a reproduction of the Garden of Eden adorned with Texas flowers, and the polished floor reflects the enormous chandelier and stained glass windows. The white altar, inlaid with 24 carat gold, is the star of the church.

A tranquil painting of three angels dressed in pink, blue and yellow floating around a cross hangs behind the hand-carved altar. The magnificent image is enhanced by painted cornices and wooden beams. Local legend has it that the congregation struggled to find someone to secure the cross to the top of the 130-foot steeple. They offered a keg of beer to the individual who achieved the feat to encourage hopes. A man accepted the offer, and when he got to the top, he did a headstand!

A group of families from the northeastern Moravian region arrived in the central highlands of Texas in the mid-1800s, and after encountering a grove of oak trees, they chose to call the place their home and named him Dubin. Following the civil war in 1877, these same families decided to build the Church of Saints Cyril and Methodius.

They topped their place of worship with an iron cross forged by a freed slave named Tom Lee, which was quite symbolic.

Saints Cyril and Methodius, however, were killed in the 1909 storm that decimated central Texas. Intrepid, the Dubinites built a new church in 1912 and succeeded in saving Mr. Lee’s cross.

Saints Cyril and Methodius is a tribute to the Gothic cathedrals of their homeland, with sky-blue ceilings and domes adorned with gold stars, flowery stencils and tall angels. The altar is surrounded by statutes and a mural of Christ in the Garden of Gethsemane is clearly visible.

Saints Cyril and Methodius is a luminous, soul-uplifting sanctuary, with more windows than any other painted church in Texas. The colorful interior was deemed too distracting by the local bishop in the 1950s, so the artwork was laundered. Saints Cyril and Methodius restored the original painting in the 1980s, when other nearby churches stood out for their painted interiors.

The congregation spared no expense in building the structure, which includes corner towers, buttresses, magnificent stained glass windows, domed ceilings, and ornate moldings. In the early 1900s, George Kilgen & Son designed a unique pipe organ for the region, which despite its electricity continues to fill the church with magnificent hymns. Look for the stained glass window depicting two young people receiving their First Communion from the Guardian Angels during your visit.

The boy is James and the girl is Erma, two church-related immigrant children who died at an early age, as many did at the time. Another prominent feature is a fresco of the 12 apostles that runs the entire length of the central aisle. However, the artist took liberties by substituting Matthias for Judas.

In case you need a break, Fredericksburg is a wonderful German city with a rich history and a fun downtown. This small town in Texas was formed on May 8, 1846 by German immigrants as part of the Society for the Protection of German Immigrants in Texas.

The Painted Churches of Texas are treasured historic structures that commemorate the inventiveness and faith of the early settlers, and seeing them is a delight.

The majority of churches are open to the public; however, access to the altars is restricted.

In addition, while the sanctuary is not in use, some congregations close the doors. Accordingly, we suggest that you take a tour to better understand the peculiarities of each building. The tours also allow you to familiarize yourself with the subject up close.

Dreaming of a white Christmas? These are the 5 snowiest cities in Europe