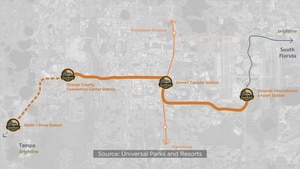 Plans are underway to bring a SunRail station to the Orange County Convention Center.

The FDOT said the commuter rail station would connect to Orlando International Airport.

If the county approves it, it will connect the convention center to the airport and boost the economy.

This change would also have a significant impact on Orlando’s transportation.

Read: Here’s what happens next for the SunRail/Brightline shared corridor

Universal Orlando and the Right Rail Coalition of Orlando said they would help make that happen.

This district will allow the community to build, pay for and operate the new SunRail station without relying on taxpayer dollars.

Universal Orlando said it would move forward with the Sunshine Corridor program, which was announced last May.

According to a statement, Universal Orlando said it would have significant economic benefits.

Read: EXCLUSIVE: Brightline on track to bring passengers to Orlando 2023

Once complete, the station will provide crucial regional connectivity for residents, visitors and more than 100,000 local workers in the International Drive area.

The corridor will also connect to Brightline, which serves Miami, Fort Lauderdale and West Palm Beach.

Channel 9 has contacted Orange County but said it has no comment at this time.

Why is Simu Liu sure that “Barbie” is stepping up and dropping its stereotypical beauty standards?

Stay on the double story of the Spice World movie

At Home with Gary: South Florida Real Estate Predictions for 2023