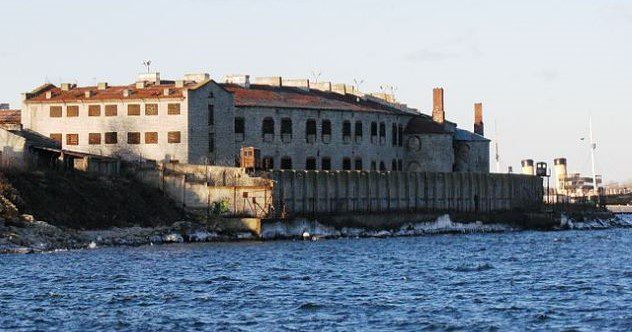 Abandoned buildings can be scary in general, but abandoned prisons are just plain scary.

Even if you’re not a superstitious person, just being in these places can be unnerving, knowing the horrible things that could have happened while they were still active. The poor living conditions, history of torture and killings make these places disturbing.

Here are the 10 scariest abandoned prisons in Europe.

This Italian prison is located on the island of Procida, high on a cliff. In fact, it offers some of the best views of the Bay of Naples on the island. As a former location, it’s something you might expect – like a prison, not so much. But when it housed prisoners, the visuals weren’t enough to make up for the horrific conditions. Between thirty and forty men shared “cells”. To make matters worse, they also shared a bathroom… Well, more like a bucket that was emptied once a day. There were up to 600 prisoners, almost as many guards and policemen (500).

1830-1988 it served as a prison, a Russian gulag with better weather. 1930 this former royal palace housed some of the worst mafia criminals and even some fascists led by Mussolini. In the 1970s and 1980s, it was home to many members of the Camorra crime syndicate, including Raffaele “The Professor” Cutolo, Frank Mannino and Gigino “The King” Giuliano. Although they were locked up, Giuliano recruited other prisoners to work for him on the outside when they were released.

Falling into disrepair since it was closed in 1988, the prison is now crumbling, and the once-dominant Bourbon Palace is now nothing more than empty, echoing corridors. You can visit the prison today, but you must make an appointment in advance. You won’t have a hard time feeling the desperation of the prisoners crammed into a small room with one window looking out at the clear, blue sky. So close, yet so far. [1]

Spac prison is one of the oldest and most beautiful abandoned prisons in Europe. It was a political prison in Albania during the Soviet era.) The prison has been abandoned for almost 30 years, but the walls still bear witness to the horrors that took place, with prisoners carving their names, pictures and lines into the surfaces.

The rapidly deteriorating property was to be turned into a museum. However, the government has not taken any step to declare it as a museum. Until then, he remains at risk of further deterioration. In 2015, the New York-based World Monuments Fund named the prison as one of the 50 most endangered places in the world. It is expected that he should pay more attention to the financing of its revival.

However, visitors to the Spac must be careful, as the prison is mountainous and the road to it is not very safe after dark. You should also wear sturdy shoes to navigate the steep mountain terrain.[2]

When the Soviet Union and the Iron Curtain came down, this prison was left to rot. The island’s rocky outcrop, called Goli Otok, now houses a collection of abandoned buildings. It is sometimes called the “Croatian Alcatraz” because of the similarities between the islands and the very strict security measures.

Russian prisoners of war from the Eastern Front were sent to Goli Otok during the First World War. When the first captives arrived, the island was bare and barren. The prisoners were forced to build shelters and settlements. in 1949 The Federal People’s Republic of Yugoslavia officially declared the entire island a high-security, top-secret prison and labor camp, along with the neighboring island of Sveti Grgur, which housed a women’s prison. The prison operated until 1989.

Regardless of the weather, prisoners were forced to do hard labor that could reach as high as 104 °F (40 °C) and drop to freezing in the winter. The prison was run by the inmates themselves, so it operated according to a hierarchical system of violence and humiliation. In total, about 16,000 political prisoners served their sentences here; of these, 400-600 died on the island.

Since its closure in 1989, it has remained in ruins and shepherds from Rab have moved to the island to graze their sheep. More recently, it has become a tourist attraction.[3]

Patarei Prison in Tallinn, Estonia is a haunted and mysterious place. It has been closed for more than a decade, but artists and ex-prisoners use its chambers for art exhibitions and small exhibitions. The walls are covered in graffiti, which seems very fitting. But exploring this haunted place isn’t easy, especially when you’re alone.

The infamous image of the prison was reinforced by the fact that Patarei has housed death row prisoners throughout its history and also carried out executions there.

The prison was originally a sea fortress built in the 1800s to protect the Russian Empire’s shipping routes. in 1919 it was converted into a prison and eventually housed around 500 prisoners. Many were purged in the 1940s because the prison was overcrowded and dirty. In Patarei, the capacity of prisoners was 1200, but in 1941 October month. there were a total of 2,600 prisoners. Until 1945 March 10 the number of prisoners was 3620. After the war, the Soviets emptied the prison and sent the prisoners to gulags in the east.[4]

Rummu Prison was built in the late 1930s in a limestone quarry. When the Soviet Union collapsed, it was abandoned. The grounds have been flooded and the prison is now a partially submerged island of crumbling brick walls.

When the Soviets left Estonia in 1991, they closed the country’s Soviet-era institutions. This included the labor prison at Rummu. After the pumping was stopped, the prison was abandoned. Eventually, the quarry filled with groundwater.

Visitors can now explore the underwater prison by boat or by diving the ruins. Visitors can view the prison walls, used machinery and buildings from below, creating a mystical, surreal scene. Access is very difficult and can be dangerous. Many tourists like to jump into the lake from the ruined prison buildings, and warning signs have been erected to warn people of underwater dangers. Beneath the surface of the water lie pieces of metal, machinery, barbed wire, rebar spikes and crumbling concrete. In August 2014, a teenage girl’s back hurt while jumping from one of the collapsed buildings, and in July 2016, a drowned man was found in the lake.[5]

One of Krakow’s best-kept secrets is the Lebanon Quarry. Located in Podgorze, the old part of the city, this place was a major quarry during World War II and has since been used for many different things.

During the Nazi occupation, the Lebanese quarry became a detention center. This place was used as a forced labor camp for hundreds of Poles and Jews. Between 1942 and 1944, more than 800 people were imprisoned here, and twenty-one of them were eventually killed. The monument to the victims was built in 1948.

For a few days after the war, the quarry was still in operation, but in 1986 was closed. Steven Spielberg rented the site for the filming of the movie. Schindler’s List, based on the book of the same name. The director filmed scenes depicting the concentration camp in Plašów in a quarry.[6]

Doftana prison was one of the most notorious prisons in Romania at the beginning of the 20th century. It was notorious for its harsh treatment of political prisoners. Prisoners were beaten, starved and kept in freezing cells. The prison was built to serve the nearby salt mines. in 1940 a devastating earthquake destroyed the prison, injuring many inmates. Even if they were released, they were denied transfer.

It was nicknamed the “Romanian Bastille” because of its harsh prison sentences. It was a mining town that started life as a residential complex for mine workers, but in 1921 the King of Romania turned it into a communist prison.

From 2022 in June the prison has been bought and is to be demolished to make way for a hotel.[7]

The Elgan Gulag is a former Russian gulag that is now an abandoned military camp. During the Soviet era, Russian prisoners were sent to the gulag for cheap labor. These camps were scattered throughout the Far North and Siberia, and prisoner labor crews were often needed for large projects. Prisoners spent their days chopping trees, digging through frozen ground, and digging for copper.

The Gulag system was established at the beginning of the 20th century, when the Soviet Union was going through a period of social repression. It consisted of hundreds of camps, with an average of two to ten thousand prisoners. Most of the camps were “corrective labor colonies,” meaning that prisoners were forced to work for long periods of time in grueling conditions, under the threat of starvation and execution. Tens of thousands of prisoners die every year because of these harsh conditions.[8]

Built in 1949, the Yermakov POW camp in Siberia is a vast collection of abandoned Soviet prisons, many of which were destroyed during the Cold War. It is now an eerie reminder of the horrors that once characterized the Soviet prison system.

Thousands of prisoners were sent to this gulag, most likely to build a railroad that would connect northern nickel mines with Soviet factories in the west. The railroad was eventually abandoned, and the prison camp sank into the forest with each passing winter.

It is estimated that up to 18 million people ended up in forced labor camps. After the death of Joseph Stalin, the gulag system was closed, but forced labor camps for political and criminal prisoners continued to exist.[9]

After the formation of the USSR, this prison became a temporary place of detention for political prisoners awaiting transport to gulags in the east. It became famous during the Nazi rule in Lithuania, where it was used by the Gestapo and Security to detain thousands of Jews and Poles. Most were taken to the outskirts of Vilnius and executed in Ponary.

The last execution in Lithuania was carried out on its territory in 1995. Until 2007 it housed about 1,000 prisoners and 250 guards. in 2009 The European Committee for the Prevention of Torture has received a statement from several prisoners about ill-treatment by staff and poor living conditions described as “deplorable”.

The prison was officially closed in 2019. July 2 Since its closure, it has been opened to the public as a cultural center. It was used in 2020. while filming parts of the fourth season Stranger things. The tourism agency in Vilnius plans to open a Stranger things-a themed cell in a prison that will be rented out through Airbnb.[10]

Tell us about the trips you are planning or dreaming about in 2023. – you can win a…