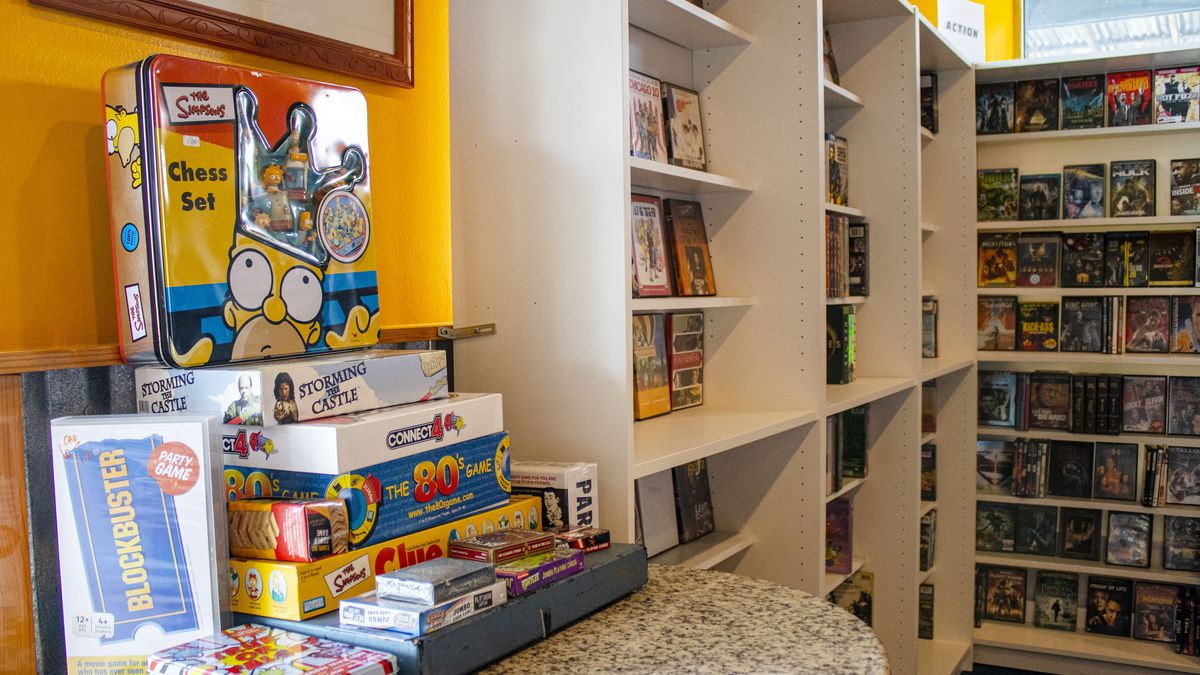 I can’t remember the last time I visited a Blockbuster Video store, probably because I never thought it would be my last time.

It’s easier to remember the red envelopes with DVDs appearing on my parents’ door more frequently when the streaming library wasn’t good – which it was most often at first. And then those also disappeared as more movie choices became available at home.

So this Zillennial reporter (of the age group that has both millennial and gen Z characteristics) was thrilled to see a bar in Pinellas Park honoring one of my favorite childhood destinations, a place to reminisce about an experience I never really got to say goodbye to. .

The Blockbuster-themed bar opened last week in a small strip mall on Park Boulevard and offers local craft beer and a selection of DVDs for rental for $1. The menu features movie staples like candy, pizza, and popcorn.

Upon entering, Beerbusters isn’t quite as produced as the many themed bars in St. Petersburg, where every angle is designed to be “Instagrammable”. The walls are lined with shelves filled with hundreds of DVDs that owner Billy Dieli said he already had or obtained through donations from his mother and friends. Some DVD boxes still bear the iconic Blockbuster barcode stickers.

The bar is filled with random movie memorabilia: old posters, a skeleton wearing a vintage Blockbuster shirt, and a Spider-Man lamp.

There are also TVs above the main bar for sports games and movie nights. Dieli said one day he might dress up in a shark costume for a “Jaws” movie marathon. The owner said the bar also supports local brands, so it’s stocked with craft beer and ciders from 3 Daughters, Green Bench and Cigar City breweries.

Most of Beerbusters’ nostalgia is in its DVD selection.

I saw movies like “Princess Bride,” the fantasy comedy released two years after the first Blockbuster store opened in Dallas in 1985. There was also a complete DVD set on the shelves with every season of “Friends.” , the ’90s sitcom that aired at the height of Blockbuster’s success and ended when the company was at its peak in 2004 with 9,000 stores nationwide. Today, only one Blockbuster store remains in Bend, Oregon.

Related: Inside the Tampa Airbnb that looks like the sitcom “Friends”

With the advent of Netflix streaming movies and Blockbuster filing for bankruptcy in 2010, Dieli said people missed having a place to look for movies — the scrolling process made selecting a movie monotonous.

Dieli, who worked at Blockbuster for nine years, said he wanted to combine two things he really loved in a hangout: craft beer and movies. This is how Beerbusters was born.

“There is no longer a destination to get something. Instead, you just sit on Netflix all day and try to find something and browse through all that content,” Dieli said.

When I asked Dieli if renting DVDs was still profitable, he shrugged.

“Since I haven’t spent any money on inventory, yeah, everything I make from the movies is profit,” he said.

Dieli said he deliberately sought out DVDs that aren’t easy to find on streaming services — Adam Sandler’s films ‘Happy Gilmore’ and ‘Billy Madison’, for example — so it’s worth the spend. the dollar at Beerbusters rather than paying $4 on Amazon to rent.

I considered grabbing the trilogy for “Lord of the Rings” sitting on the shelf designed to look like JRR Tolkien’s books. It would have been perfect to watch it before the Amazon Prime prequel series “The Rings of Power” and contemplate the changing mediums of storytelling over the past century.

But then I remembered that I no longer had a DVD player.

Most people don’t, Dieli said. But there are still quite a few that have video game systems that support DVDs.

When I couldn’t take a movie home, I enjoyed drinking a glass of 3 Girls raspberry lemonade cider while browsing the rows of old movies, being able to hold them in my hands and read the synopsis on the back without being forced-powered auto-play trailer.

Although it’s far from an exact replica of a Blockbuster store, it took me back to when I was looking for the latest Barbie movies and begging my parents for one of the candies near the cash register.

Donald Trump in jail? The Ultimate Fish Out of Water Story: John Blumenthal