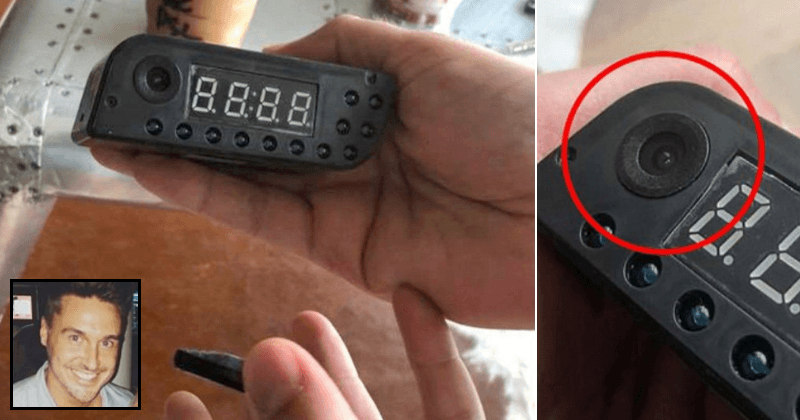 A British couple experienced a vacationer’s worst nightmare when they discovered a spy camera pointed at their bed in an Airbnb apartment. Dougie Hamilton shared that the camera was hidden in a digital clock which itself looked suspicious because it was connected to a wire “like a phone charger”. According to the 34-year-old, he and his girlfriend had just returned to their Airbnb apartment after spending a day touring Toronto, Canada, when he discovered the clock. As reported by the Daily check-inHamilton took up the clock to get a better look and was shocked to find that the host may have saved the pair.

The native of Glasglow alerted Airbnb as well as the police who are both investigating. He shared, “(Airbnb) told us the owner had six other properties and hundreds of reviews so it looks like we were lucky. We had only been there 20 minutes when I noticed the clock. We had had a busy day around town and were finally able to get to the Airbnb and relax “.

“I was right in front of this clock and staring at it for about 10 minutes. There was just something in my head that made me a little uncomfortable. It was connected to a wire like a phone charger that was not quite correct The strangest thing was that I had seen a video on Facebook about the cameras and how they could be hidden and that they also had a clock with one in it, ”Hamilton recalls.

“When I saw the clock, I thought, ‘Do I want to be the fool who checks a digital clock for cameras now? In my head, I felt a little weird even thinking about it and kept telling myself not to be a fool. But there was just something. I took out the charger and saw that there was a lithium battery on the back. At this point, I swiped the front facing the clock and could see that there was actually a camera, ”he added.

He also shared that the camera was facing the living room and open plan bedroom and had its eyes on “everything”. “We weren’t sure if the owner had watched. It was really scary and we didn’t want to stay. We are innocent people but the clock was facing where our bed was and we thought it might. be for something more sinister like a sex ring, ”Dougie continued.

“We received a call last Thursday regarding what appeared to be a video camera in a clock in an apartment. The investigation is continuing,” said a Toronto police spokesperson. Hamilton and his girlfriend who chose to remain anonymous filed a formal complaint with Airbnb.

“Airbnb forwarded this to their security team. They told us to choose one of the three luxury hotels nearby and said we could leave Airbnb and get a full refund. They said they would cancel upcoming bookings for the owner’s properties, ”Hamilton said. added. Even though the couple had the unpleasant and shocking experience, Hamilton says he will continue to use Airbnbs during his trip. “I’ll do a quick review of the room when I check in,” he shared.

Paris could be the next city to remove AirBnB

I love our loud, cold beach towns – that’s why I would stop anyone from…