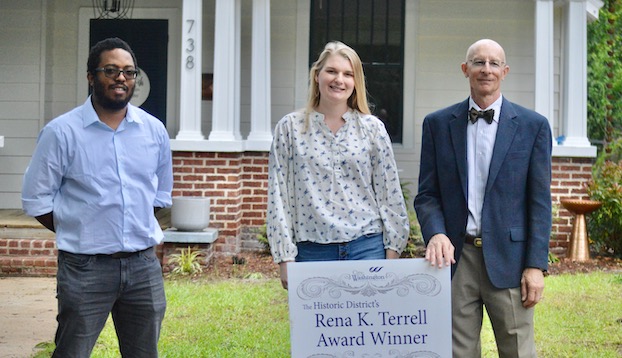 The house at 738 W. Main Street in Washington had been an eyesore for years. The elderly couple who lived there could not manage the repairs and the house deteriorated further after their deaths.

Their heirs decided to sell the property as is, and the first buyer left a few months later, seemingly overwhelmed with the time, effort and money needed to revive the 1920s structure.

They purchased the property in 2020, and 18 months later, the City of Washington and real estate agent Scott Campbell selected them for recipients of the Rena K. Terrell Good Neighbor Award for bringing the home back to life.

“I think we were the only ones in the neighborhood who didn’t want to tear it down,” Nicky Hosey said. “The amount of stuff inside and outside the house was incredible and it took a long time to get rid of it. There were three cars, 12 fridges and lots of other debris in the garden and there were weeds and other wild plants growing in the kitchen.

Hosey and her husband did other renovation projects around town and were unfazed by the dilapidated state and occasionally discussed things they found during the cleanup process. In fact, they saw great potential where no one else saw it.

“We just didn’t want to tear down the story,” she said. “We knew it would suit the neighborhood when we cleaned it up and it looked decent, so we approached it from that angle from the start. We were thinking of living there ourselves, then thought of an Airbnb before deciding to renovate it and sell it. It’s a good thing that we are not afraid of big projects, because this was one of them.

The couple completely remodeled the three-bedroom, three-bathroom, 2,500-square-foot home within 18 months of acquiring it and said the neighbors were a constant source of encouragement.

“We had three different families show up while we were working to share their memories of this place,” Hosey said. “The current neighbors have been very positive and encouraging throughout the process and we are happy with the transformation. We hope that the current family will feel the love we put into this project.

The Terrell Awards are made possible through a partnership between the City of Washington and real estate agent Scott Campbell. Campbell, an agent for Coldwell Banker Coastal Rivers Realty, is a strong supporter of historic preservation and has worked with the city to recognize the dedication of Washington-area landowners who preserve the stories of these historic homes and businesses. Awards are given in four categories: Best Residential Rehab, Best Commercial Rehab, the Good Neighbor Award and Stewardship Award.

“Nicky and Brandon took a place that was abandoned, looked awful and was in terrible shape and turned it into a neighborhood gem,” Campbell said. “That’s what this award is for and they really deserve it.”

Historic Homes You Can Own in the Waco Area | Local News