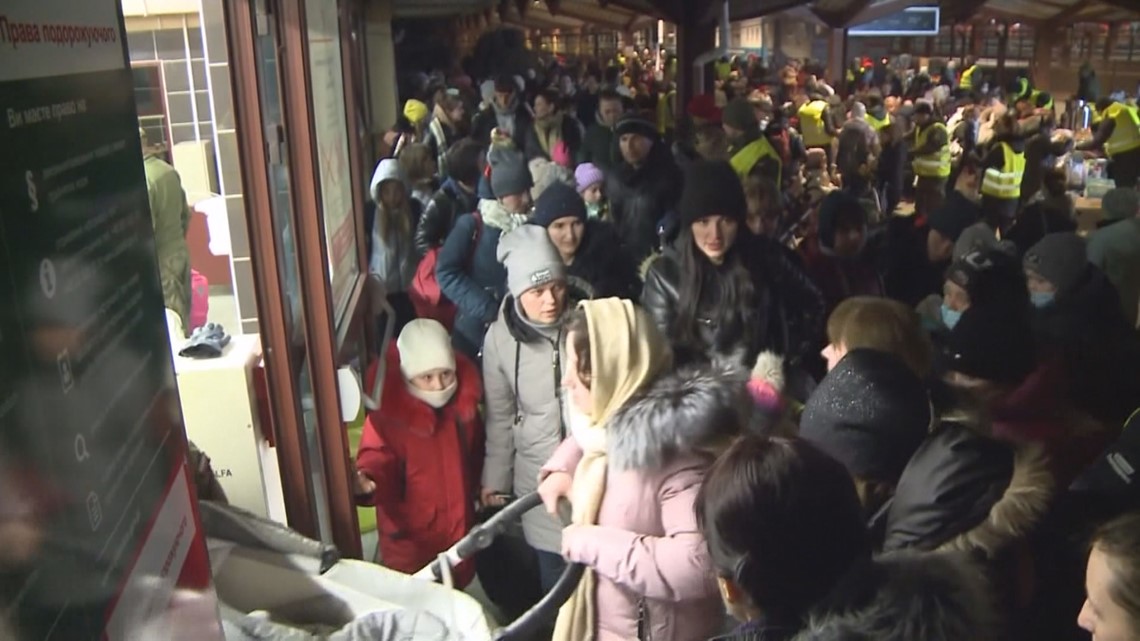 MN-based Alight continues to help with the Ukrainian refugee crisis

The organization is expanding its Welcome Home program – originally created to help refugees from Afghanistan – to help those fleeing war in Ukraine.

MINNEAPOLIS — Six months after Russia’s initial invasion of Ukraine, a Minnesota-based organization remains on the ground to help those caught up in the region’s largest refugee crisis since World War II.

According to United Nations High Commissioner for Refugees, at least 12 million people have been displaced since the start of the war in Ukraine, either within the country or across the region.

But Alight – formerly the American Refugee Committee – responded to the crisis days after the February 24 invasion. Over the months, Alight’s reach has evolved according to the needs of displaced people: from providing hats, gloves and heated tents; ensure that refugees have access to the medicine, food and safe shelter they need; to work with organizations based in Ukraine to provide the necessary services and even comfort from home. And also over the months, Minnesotans from diverse backgrounds have answered the call for help.

A trio of Minnesotans make the difference

Mary Nicol of Plymouth, Minnesota, was no different from most Minnesotans when the Russo-Ukrainian War began: she was stunned by the pictures and headlines, and frustrated by the inability to help immediately. .

“I found I was really angry, and I was in a state of disbelief at times, like, ‘How does this happen?'” Mary shared with KARE 11’s Karla Hult a few hours prior to get on a plane to Poland.

Sure enough, Mary struggled with the lack of answers to her questions. That’s why the retired Medtronic nurse and medical safety specialist decided to reach out to the organization she already knew in the field: Alight.

“I told them, I said, ‘I mean, I’ll do whatever you want me to do. It doesn’t matter,” Mary recalls of her early conversations with Alight staff members.

A few weeks later, Mary had booked her flight and was destined to help the teams working along the Ukrainian-Polish border.

“The idea is that I will work on their psychological first aid training,” Mary said, adding that she would work specifically with local housing guides – many of whom had just fled Ukraine themselves. “What I really hope is to make them aware of the key things they can focus on, not only in terms of refugees, but also in terms of self-care.”

“I just felt super obligated to do something,” Mary said of her role.

And Mary wasn’t the only Minnesotan who felt compelled to “do something” with her unique skills and experience.

Today, Artem Artyushkov calls Chaska, Minnesota home. But the electrical engineer grew up in Kyiv, Ukraine, and still has family and friends in the now conflict-ridden country.

“I still have two sisters in Kyiv, one younger and one older. I talk to them almost every day since the war started,” Artem said of his lingering outreach to his family.

Like everyone in his new community, Artem has watched every nuanced development in Ukraine. But Artem also harbored a concern for his loved ones, as well as a strong desire to lend his voice, his empathy and his talents to his native land.

“When the war started, it was a shock at first. Absolutely – feeling disoriented – what to do, how to help, what will happen,” Artem recalled, before reflecting on when he found Minnesota-based Alight. “I’m so glad I found Alight. [It gave] the opportunity to bring me here, to the border with Ukraine.

As an Alight volunteer, Artem served as a local housing guide and in other roles during an extended stay in Poland. He is able to speak his native language to those navigating a long journey and a new home.

“Being at the border, just talking to Ukrainians telling them they are safe now, it’s over for them – there is no more suffering… It’s extremely rewarding,” Artem shared from Poland.

As Alight’s Rapid Impact Poland Coordinator, Hahn Chang is responsible for overseeing the organization’s current reach. But as the grandson of Korean refugees, he also carries a legacy of gratitude and understanding.

“My grandparents were born and raised in the northern part of Korea, which is now North Korea. And in 1945, when the Soviet Union came – under threat of death – they had to flee. And they came to South Korea and started to rebuild their lives,” Hahn recalled of his family history which also included another chapter of becoming refugees during the Korean War.

“There is this story that has been told to me many times, it is part of my family history. It’s something I think about a lot. This idea that refugees want to go home. My grandparents never got to go home to what is now North Korea, but they always dreamed of it,” Hahn said from Poland.

It’s this family foundation that Hahn — who grew up in Maple Grove, Minnesota, and is currently studying for her master’s degree in business administration in Spain — now brings to Alight’s respectful approach to working with refugees.

“It makes it all the more important for me to meet the basic needs of refugees – obviously food, water, shelter, medicine – it’s incredibly important. But what inspires me with an organization like Alight, it’s how to raise the refugee? How do you empower those people? How do you put them at the center of everything you do? And that’s something that inspires me incredibly personally, and what drives me to do this work and be part of this great organization,” Chang said.

Joining forces to “do what is doable”

Six months on, Alight continues to address dynamic challenges – related to changing circumstances within the war and the refugee crisis – finding resources and potential partners in Ukraine and across the region. Among Alight’s key efforts since the war began: a partnership with Airbnb that has helped the organization — and its guides meeting refugees at train stations — provide nearly 20,000 nights of safe accommodation for refugees. Ukrainians.

The organization further estimates that it has served nearly half a million people since the start of its outreach activities, providing both essential items and, even, comfort from home.

“There was a long line of people. People were smiling and really having fun,” Mary recalls of a Changemakers 365 project – an ice cream social – which also served the organization’s Haven project. The Haven Project is Alight’s effort to honor displaced people by seeing their global humanity and providing relief through practical objects of joy, be it books, toys or even ice cream.

“The kids loved it, and it was just a great time,” Mary said before offering this review of Alight: “It’s an organization that doesn’t just focus on providing services. They focus on the whole person. And they take it very seriously. »

On August 24, Alight embarks on his next “serious” effort to help those displaced by the conflict in Ukraine. The organization is expanding its Welcome Home program – originally created to help refugees from Afghanistan – to help those fleeing war in Ukraine. Minnesotans will have the opportunity to sponsor Ukrainian families as they move to a safe home in Minnesota.

To learn more about how you can sponsor a Ukrainian family or support Alight’s other efforts, just click here.