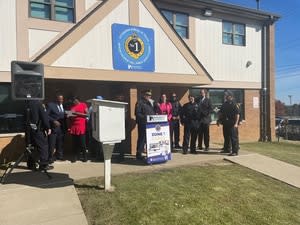 Following the shooting that killed three people on Cedar Avenue in the North Side last weekend, Zone 1 has reopened the Calvin M. Hall Public Safety Center in Northview Heights and launched a new initiative connecting police officers to the communities they serve, called Zone 1 Cares.

Connecting police to the community was the goal of the Calvin M. Hall Public Safety Center when it closed during the pandemic, and Zone 1, along with community leaders, has made it a priority to get it reopened.

Starting Friday, six officers will occupy the center through Zone 1 Cares, a pattern Zone 1 hopes to repeat in all of its 18 wards.

“For the rest of the neighborhoods, we’re going to start that in the spring of 2023,” Malloy said at a Friday afternoon news conference.

Essentially, the program is two-fold, first connecting community members to essential resources through a one-stop-shop website.

“I wanted to have a place for all the social services so when people get the QR code they know where to go,” Malloy said.

Second, the program assigns officers to a Northside neighborhood to patrol, which Malloy says has been successful in Northview Heights.

Malloy said the effort is a direct response to the recent uptick in violence in the Northside – with rising homelessness, the recent shooting that killed three people on Cedar Avenue and the shooting of a teenager Airbnb.

He said community policing is a model that works to reduce crime, but it takes time.