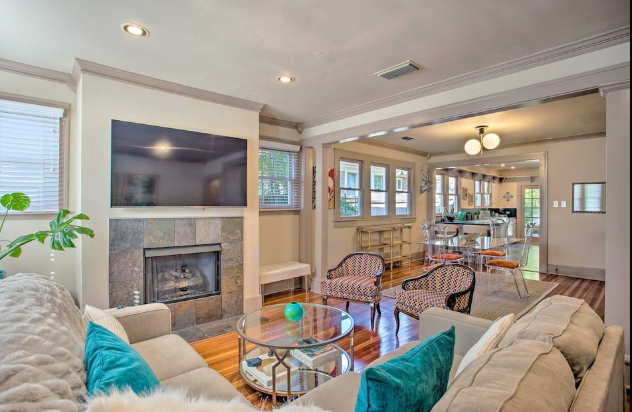 Members of the Dallas Zoning Ordinance Advisory Committee voted last week to further study — and possibly regulate — short-term rentals or adopt zoning that would make it illegal for them to operate in residential neighborhoods.

The panel will revisit the issue at its next meeting on July 7 and ultimately provide a recommendation to Dallas City Council for a final decision.

Dozens of Dallas residents appeared before ZOAC last week to share their thoughts on the city’s development code regulations on short-term rentals. Currently, anyone who operates a hotel, motel, short-term rental or bed and breakfast must Register and pay hotel taxes.

“It’s not about trying to balance two competing legitimate interests. STRs are mostly owned by investors who just want to make money,” said Holiday Park resident Matthew Bach. “They have no long-term interest in our neighborhoods or our city, but healthy, strong and stable neighborhoods are the lifeblood of Dallas. If our neighborhoods decline, so will the city of Dallas. This is truly a historic decision that will reverberate for years to come throughout Dallas and will have a lasting impact on the quality of Dallas neighborhoods.

On the other hand, there are hundreds of “superhosts” in the Dallas area who impose their own strict regulations, are registered and current on hotel resort taxes, and have never received a complaint from a guest or neighbor. Some said they would not be able to support their families or would have to relocate if they could no longer operate their existing Airbnb properties.

Lisa Sievers and her husband own and operate two STRs in East Dallas and have worked with the city on three separate task forces on the issue.

“We’re Superhosts with over 800 five-star reviews. We’re up-to-date on our HOT taxes. We personally meet with our guests and oversee our properties with respect for our neighbors and neighborhoods,” Sievers said. “We don’t allow parties. Hundreds, if not thousands, of us operate friendly, neighborhood-friendly short-term rentals.”

She pointed out that a 2021 city staff report indicates that more than 90% of STRs have no 311 or 911 calls associated with their address. Additionally, the report states that “harmful STRs are outliers, and STRs have limited measurable impact on nearby communities and no evidence of a city-wide impact. Less than half a percent of the city’s total residences are STRs.

“That tells me this is not a crisis of epic proportions, or that STRs are creating a housing shortage,” Sievers said. “It tells me that this is a nuisance problem that can be addressed with fair and sensible solutions, many of which have been set out in the proposed ordinance and registration which is currently before the council. Why do we want to eliminate STRs when over 90% of them are good operators? Let’s move forward with a prescription with teeth to weed out the few bad operators and keep the rest of us going. There is absolutely no need to shut us out of existence when no enforcement mechanism has been put in place to fix the very rare harmful STRs.

Legal action has been threatened on both sides of the case, with STR supporters citing jurisprudence in their favour, and opponents pointing to Honolulu decision to ban short-term vacation rentals.

“They said, ‘Short-term rentals disrupt the character and fabric of our neighborhoods,'” District 4 resident Tom Forsyth said, citing Honolulu’s decision. “’They are incompatible with the land uses that are intended for our residential areas. And they’re raising the price of housing for our residents by removing the housing stock for sale in long-term rental markets. The City Council believes that any economic benefit of opening our residential areas to tourism is far outweighed by the negative impacts on our neighborhoods and local residents. »

There are about 6,000 STRs in Dallas, and only about 300 are registered, officials said during the June 23 hearing at ZOAC.

Three options were presented to the zoning board at last week’s meeting:

Julia Ryan, director of urban planning and design, presented the options to city council at a June 15 meeting, noting that Option C, called “Keep It Simple Solution”, was proposed by councilor of District 14 Paul Ridley in a five-signing note.

“I would suggest that the preferred option communicated to ZOAC be the additional ‘Keep it simple’ option, which provides some latitude to ZOAC and [City Plan Commission] to provide us with recommendations in terms of specifics and yet represents a significant number of board member wishes,” Ridley said.

A registration ordinance is also being proposed by the city’s code compliance department that would require STR owners to register, pay an annual fee, require emergency contacts, and be subject to inspections by city ​​staff.

District 1 Councilman Chad West expressed concern that the process could “escalate” for a year at the CPC level, essentially activating another task force to study the matter.

“It may be a good thing in some cases, but is it realistic to really come back here in August?” He asked. “ZOAC and CPC work very hard, but their meeting schedule is not as frequent as ours. This is my concern.

Ryan said his goal is to return to the board in late summer or early fall.

District 10 Councilman Adam McGough said he wants to make sure STRs are some distance from schools. The proposed code allows 1,500 feet between STRs and could also address proximity to schools, city officials said.

If the chosen option stipulated that STRs could not be located in residential areas, the existing ones would operate illegally. ZOAC members briefly discussed last week whether these properties could be phased out or remain usable under a grandfather clause.

Critics of short-term rentals point to Dallas’ housing shortage and lack of affordable housing as reasons to eliminate Airbnb properties. Many residents who live near STRs have drawn attention to illegal activities and loud parties and events.

Tenants don’t control their guests or monitor their activity, Forsyth said. Another speaker said STRs are for-profit businesses and neighborhoods should be for families and homeowners only.

District 1 resident Laura Palmer said there is a problem with many different types of STRs in Kidd Springs.

“You know there’s a problem when, at your neighborhood Christmas tamale party, you don’t talk about what you’re doing for the holidays. You talk about the hostel that’s next to you or you try to figure out if a single family home that’s rented out on Airbnb is being used for sex trafficking,” Palmer said. “Dallas residents have to deal with a steady stream of STR guests in their neighborhoods, guests who have no respect for our neighborhoods.”

District 14 resident Norma Minnis said neighborhoods deteriorate when land use and zoning are not consistent.

Prospect Avenue resident Olive Talley pointed out that if zoning is passed, STRs will still be able to operate outside of residential neighborhoods.

Not all STRs Are bad neighbors

Many STR hosts also spoke at the ZOAC meeting, advocating for the ability to continue operating their rentals and suggesting that those who cause a nuisance, break the law or violate applicable city ordinances be individually punished. .

Mobile workers who stay in the city for two weeks or two months use Airbnb properties as an affordable, safe and comfortable temporary option, advocates said.

“There are a lot of good Airbnb hosts out there,” said Fernando Bautista. “We are punished by many who are not [good hosts]. I think it’s good for the city to have alternative housing. Even when the COVID crisis happened, we were the only ones operating. We are a superhost and employ a group of good, hard-working people. To be punished for something like that, I don’t think that would be fair.

Nicole McClelland and her husband have been operating STRs for seven years.

“We are responsible hosts who watch our guests closely,” she said. “We don’t allow parties. We take care of any issues during their stay in a timely manner. We are registered and pay our hotel taxes monthly. I am a mother of three children and it is our daily bread for our family. I took my kids to our Airbnbs, feeling perfectly safe. They watched me clean and operate our STRs from the very beginning. They watched me greet and interact with our guests… This is not passive income for us. Zoning STRs would hurt our family business. As a taxpayer, I don’t think that’s the solution. Please, please don’t stop us by zoning out the STRs.