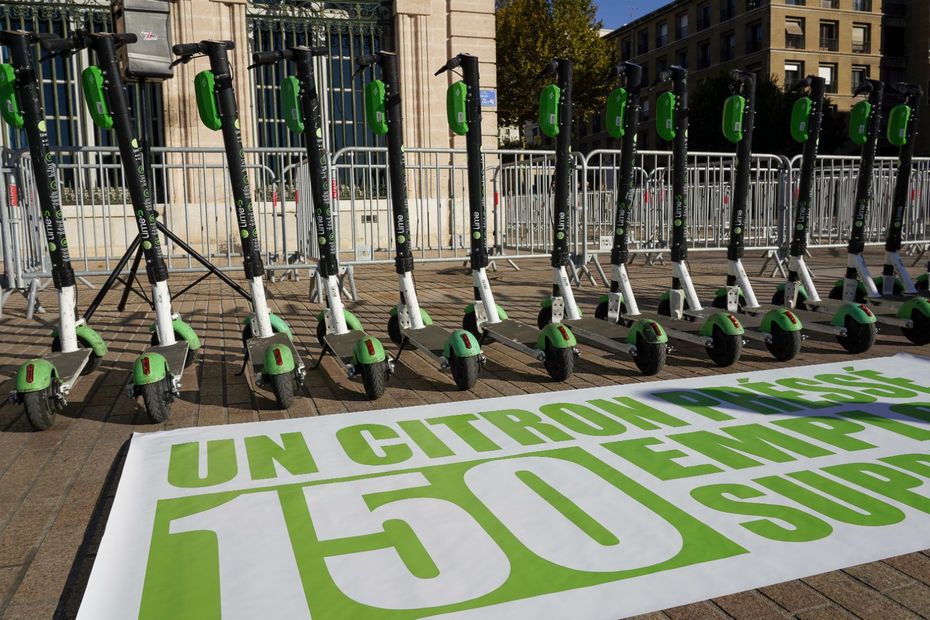 Marseille retains only 3 out of 5 operators, Lime withdraws

Electric scooters have seduced the people of Marseille. But to put an end to “anarchy”, the city of Marseille is limited to three the number of operators: Bird, Circ and Voï. Discarded, the incumbent operator Lime withdrew its scooters on October 21.

Lime scooters remain in service until October 21. They were the first to settle on the Marseille pavement. “Our disappointment is up to the commitment and efforts made by the company for 9 months” declare the operator in a press release.


In this lap of time, the electric scooter seduced 403,543 Marseille residents. Proof of this success and the economic market represented by this means of transport, six operators had invested in the city.

A success partly due to the feeling of freedom. Scooters are available everywhere, geolocated using a smartphone and above all, they can be dropped off anywhere, with free access for a future user.

But this freedom had become a problem, in the Marseille city, the scooters were spread out on the sidewalks, hindered the passage of pedestrians and offered a desolate visual spectacle. The municipality wanted to bring some order and put an end to “this anarchy”.

On Wednesday afternoon, Jean-Luc Ricca, municipal councilor responsible for parking and traffic, announced that only three operators were selected to operate this new mode of transport: the German Circ, the Swedish Voï and the Californian Bird.

“I wanted to have good regular relations with the operators, so the choice of three companies seemed sufficient to me, unlike other cities which have 18”explains the chosen one to traffic.

These companies must each make 2,000 electric scooters available to the public. The fleet will therefore represent a total of 6,000 two-wheelers.

The winners sign a one-year contract, renewable twice. At the end of this period, a new call for projects may be launched.

The disappointment of the incumbent

The incumbent operator Lime, which had not yet installed its scooters on January 19, was removed from the call for projects. He may have paid the price for experimentation.

“The members of the jury were unanimous on the choice of winners, but beyond the criteria defined in the call for projects, I also listened to the inhabitants of Marseille and in particular the CIQ (Neighborhood Interest Committees). It is true that certain nuisances observed have not been in favor of certain companies”recognizes Jean-Luc Ricca.

In a press release, the Lime operator said it was disappointed to have been dismissed and did not understand this decision. The company indicates that it has invested several million euros, employer 150 employeesnot to mention a hundred active partners for the recharging and deployment of scooters on a daily basis.

The company had also set up a team of educators trained to prevent vandalism and raise public awareness of the correct behavior to adopt on a scooter.

“Lime had set itself a goal: to serve the people of Marseilles to become part of the local landscape. Our disappointment is equal to this commitment and the efforts made”states the press release.

The last operator, Wing Scooter, based in Marseille was a Marseille start-up. This young company has been suppressed. “It’s true, this company has not been unworthy, but the three winners have presented better records”confess the chosen one.

On April 17, a call for projects was launched to limit the scooter market and require discipline. Eleven operators applied. The municipality was to announce its choices on July 15, but the files were not satisfactory, particularly in terms of security.

The city asked the candidates for more details. Eight companies remained in the race and the jury selected only three. Three operators each have 2,000 electric scooters, but the municipality reserves the right to modify this number again later.

To select the three companies that were selected, the municipality had defined several criteria. The technical aspect represented 70% of the score, the city wanted scooters with a brake and a buzzer.

But the most important objective for the elected officials in charge of traffic and parking was to bring order, discipline and preserve public space (30% of the technical score).

For this, the operators were free to choose the solution, whether in the form of a station as for self-service bicycles or by preferential rates to encourage users to return the scooter to a defined location.

Finally, one of the criteria was also to ask the operators to reverse a percentage of their turnover to the city. This criterion counts for 30% of the final mark.

Soon an agreement with the operators

An agreement will soon be signed between the city and the operators. This contract provides for the amount of the fixed part and the variable part of the fee that these companies will have to pay to the municipality.

This contract will also set the requirements of the city, in terms of safety and good driving, with reference to the “anarchic” parking of scooters.

“I am going to list the obligations for operators. I have already asked them to organize training and prevention sessions for users”, says Jean-Luc Ricca. He also adds that on the repressive aspect, the police can sanction bad behavior, such as traffic on sidewalks or in the bus lane.

This agreement will stipulate, among other things, that for two-wheelers thrown into the sea, operators will have four days to remove them.

Still in the specifications of the obligations, electric scooters will only be available to the public from 5 a.m. to 10 p.m.which should limit the risk of nocturnal vandalism.

Some figures after eight months of operation

Number of scooters available to the public: 4.697

Number of accidents (with intervention of the emergency services): 283 (i.e. 1.1 accidents per day)
Environment : 416 tonnes of CO2 were not released into the atmosphere

Airbnb castles you can rent to feel like pure royalty

Airbnb and its second largest global market; Can France master the travel giant?