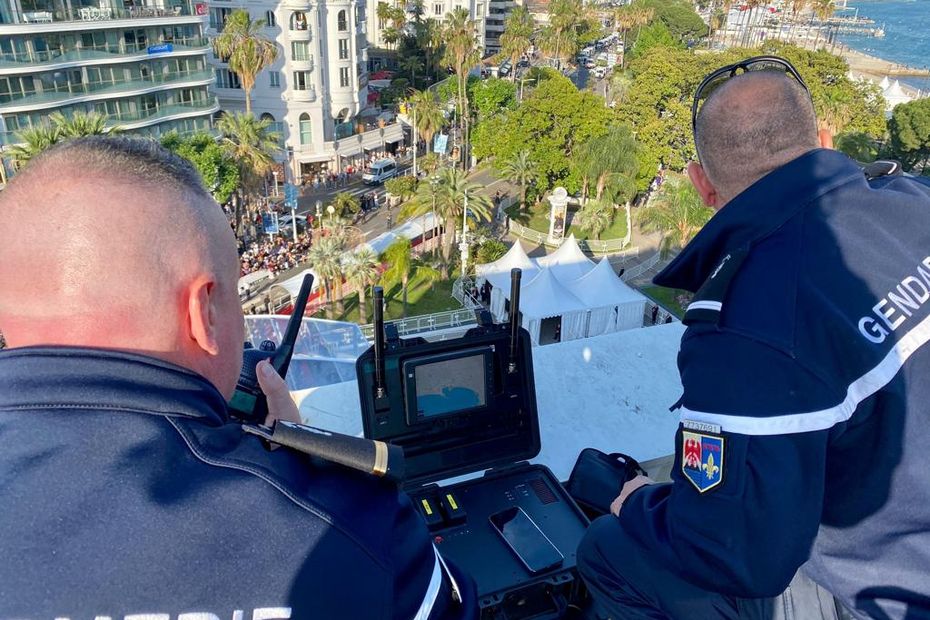 Cannes film festival. Gendarmes track drones on the roof of the palace

From the roof of the palace, anti-drone Gendarmerie units (LAD) ensure the safety of festival-goers. Every day they track drones. An expanding device. Since the start of the Cannes Film Festival, one to two drones per day have been neutralized.

All about:
The Festival of Lights 2022 in Lyon

The threat is twofold: the accident, if the drone falls into the crowd, but also the threat of an attack. Two risks prevented by these gendarmerie units, throughout the duration of the Cannes Film Festival.

From the roof of the palace, two gendarmes watch the Cannes sky every day. They ensure that no drone flies over this area.

To achieve this, the process is run-in. Thanks to an anti-drone detection case, they spot any flying object which enters the prohibited overflight zone.

“As soon as a drone is identified, the device starts ringing. Then, on the map, we immediately have the location displayed“, explains Chief Warrant Officer Frédéric L.

In a few seconds, the drone is therefore localized by the pair posted on the roof of the palace. “Next we have two tools for the neutralizer“, continues Chief Warrant Officer Frédéric L.: an anti-drone gun and an anti-drone rifle.

The objective is to very quickly cut the connection between the remote control and the drone so that the drone goes into error.

At first, it is the anti-drone gun that is used by Chief Warrant Officer Frédéric L. »It’s great for reacting quickly, but it’s much less powerful than the Anti-Drone Rifle.

The area is then targeted and the drone neutralized using a multi-frequency jamming system.

If the drone is in a more distant area, the anti-drone rifle will then be used, rifle with greater range.

As soon as it is neutralized, the drone stops moving and immediately returns to the location where it took off.

With this protocol, the drone is neutralized in a few minutes. Then, it is on the ground that everything happens in order to locate the pilot and proceed with the seizure of the drone. “On the map, we have both the position of the drone but also of the remote pilot. We transmit the information to the crews on the ground who then take care of the arrest of the pilot“, says Chief Warrant Officer Frédéric L.

During the festival we neutralize one to two drones per day. The pilots are mainly foreign tourists who are unaware of the regulations.

For 7 years, the LAD unit of the gendarmerie has been tracking drones in the skies of the Alpes-Maritimes. It is part of a national gendarmerie system. “As soon as there is a particular event, presidential visit, Nice carnival or Cannes festival, our unit is deployed“.

The drone, an object in full expansion. “We see that more and more individuals use them, it’s true that it can be tempting to make beautiful images of the red carpet seen from the sky“, he comments.

Yesterday, Wednesday May 25, in addition to the interception of a drone around 7 p.m., the anti-drone gendarmerie units were also mobilized to ensure the smooth running of a drone show organized on the occasion of the evening for the film Elvis by Baz Luhrmann, presented that evening at the Cannes Film Festival.

In the Cannes sky more than 200 drones lit up for an unprecedented show lasting approximately 7 minutes.